Why does a synchrosqueezed wavelet transform show oscillating behavior?

This question came up in the context of the ssqueezepy library. As a basic experiment I did compute the synchrosqueezed wavelet transform of three basic signals:

Basically the transform manages to perfectly localize signals (1) and (2), but for the mixed signal there is a surprising oscillation pattern. Zooming in a bit: 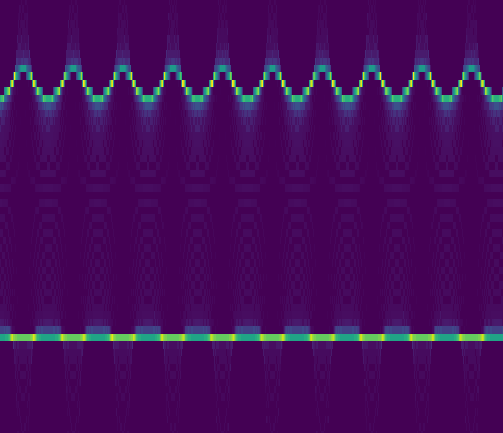 In general the issue depends on the choice of mu of the underlying wavelet. In this particular example, increasing mu slightly can help to make the transform of the mixed signal non-oscillating.

Nonetheless I'm wondering why synchrosqueezing leads to this oscillating interpretation of the signal in the first place?

This was interesting to figure out. The key lies in the phase transform, and how CWT interacts with own derivative upon insufficient component separation. Relevant are, and I'll be answering, the following:

Answer split in two to separate meat from supplement, but much of insight's in latter; sections labeled in recommended reading order.

0. How does the phase transform work?

1. What causes the wavy pattern? 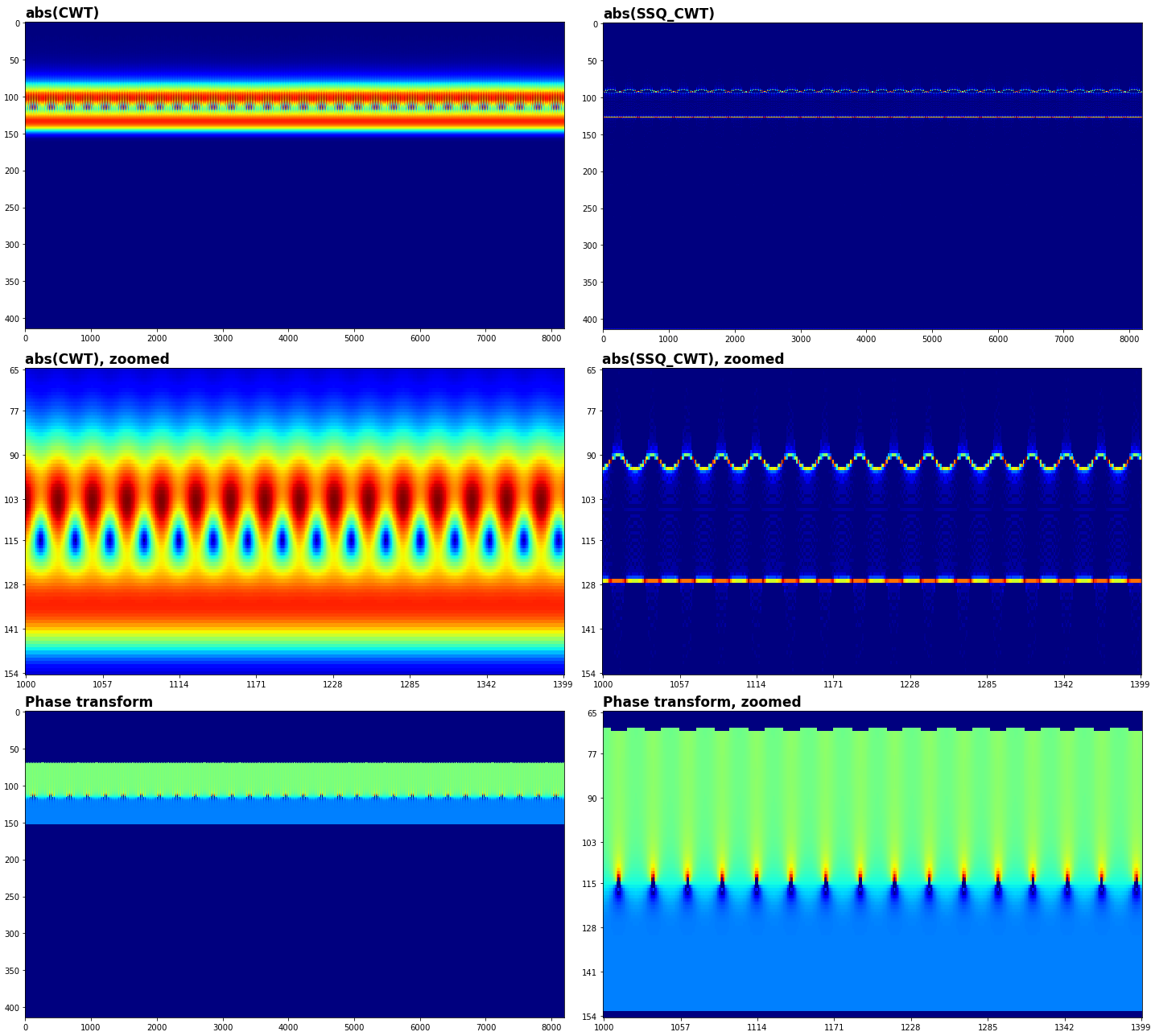 The lower frequency's CWT and SSQ are nearly that of a pure tone, but the higher frequency is all wiggly. Let us plot one such wiggly row:

This sure looks sinusoidal. But is it? Stay tuned.

First: is the wavy SSQ explained by the w? Absolutely: w is wavy across timesteps, meaning for every column, we reassign CWT rows to a different SSQ row, in a wavy/sinusoidal pattern (see [complement] on reassignment). Our answer thus lies in understanding why w is wavy to begin with. Second answer begins here.

Recall, the CWT and dCWT operations both take place in the frequency domain; we reach the lowest level of analysis by inspecting it directly. With xh = fft(pad(x)), psih = freq-domain wavelet, and dpsih = freq-domain wavelet with the derivative (* 1j * xi / dt), we plot both, overlapped and rescaled to fit in same graph, as well as the result of the multiplication - for our same row, and one on higher scale: 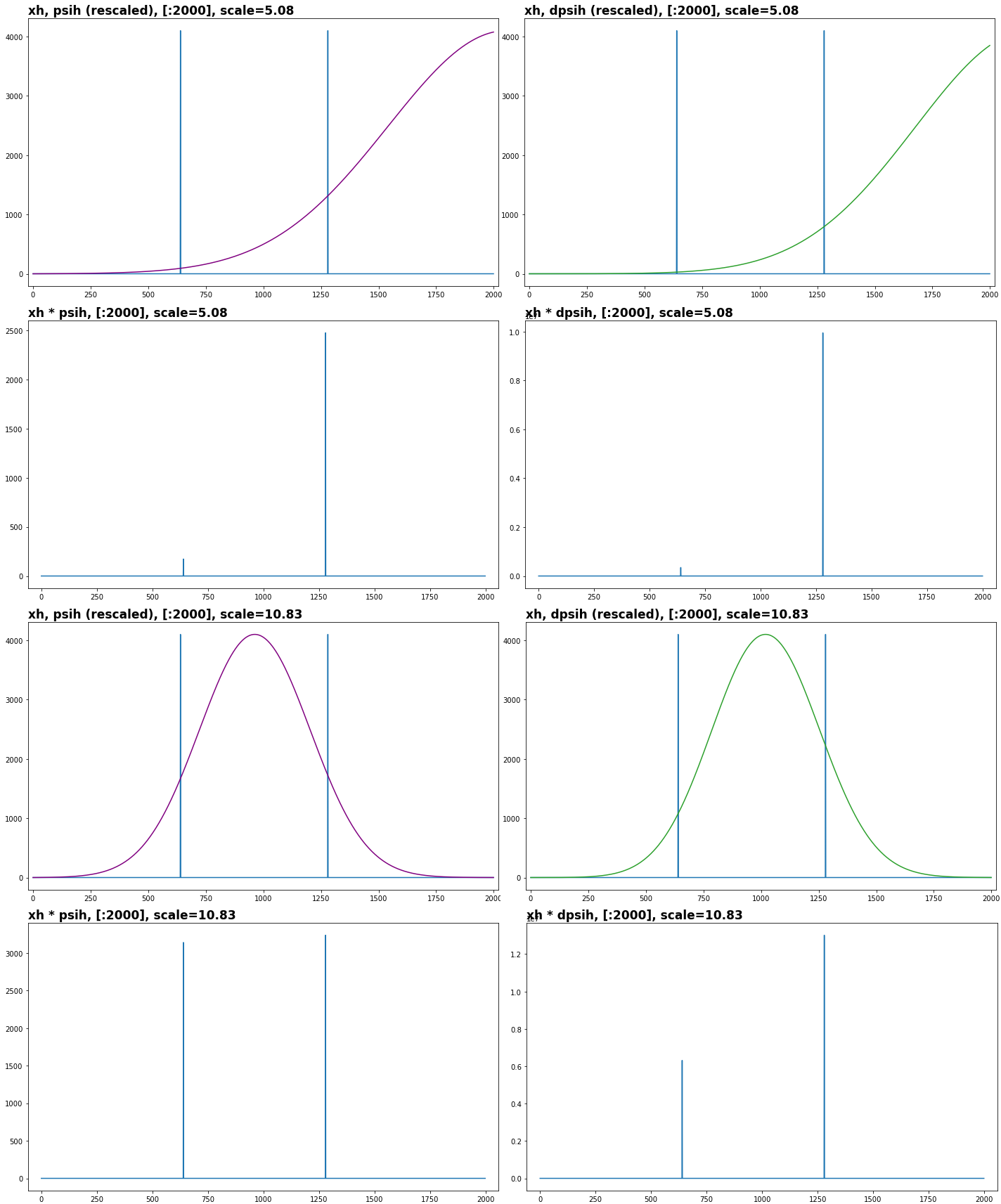 First, note for our original row scales[80] = 5.08, we indeed have a sum of two pure cisoids (analytic wavelet -> all negative frequencies are zero, and Morlet has pure-real DFT; cosine input -> pure real DFT; thus a DFT coefficient multiplies its complex exponential basis without cancellation), one at higher frequency having much greater amplitude.

Next, compare the cisoid amplitudes for psih vs dpsih; higher frequency dominates more for dpsih than for psih for both example scales. Coincidence? Well, they both do * xh, thus we expect the dpsih wavelet itself to skew toward right. Plotting,

this is confirmed. Does this happen for every scale? Yes: * xi = * linspace(0, pi, N) - taking the derivative involves multiplying by a line, thus skewing the entire wavelet toward higher frequencies, also breaking even symmetry (though not a lot).

All puzzle pieces are in. The skewness creates a difference in relative amplitudes at the two frequencies w.r.t. the non-derivative. The general form for dWx / Wx is then (still assuming purely real fft(Wx)):

Strictly speaking, nothing, unless the wavelet decays completely to zero eventually (untrue for many wavelets); as long as there's more than one frequency in the entire DFT of the input, there will be some form of interference. However, practically, such interference can be made negligible by:

mu=20 is clearly narrower; to get a better idea, single out a few rows:

Can we also guess how to make both bands wiggly for small mu? Note, increasing scales lowers the wavelet's center frequency (shifts it left), but also reduces its frequency width; thus our wiggle odds improve toward lower scales (or higher frequencies). This turned out easier said than done; after some experimentation, I've had limited success, but maybe it can be done better: 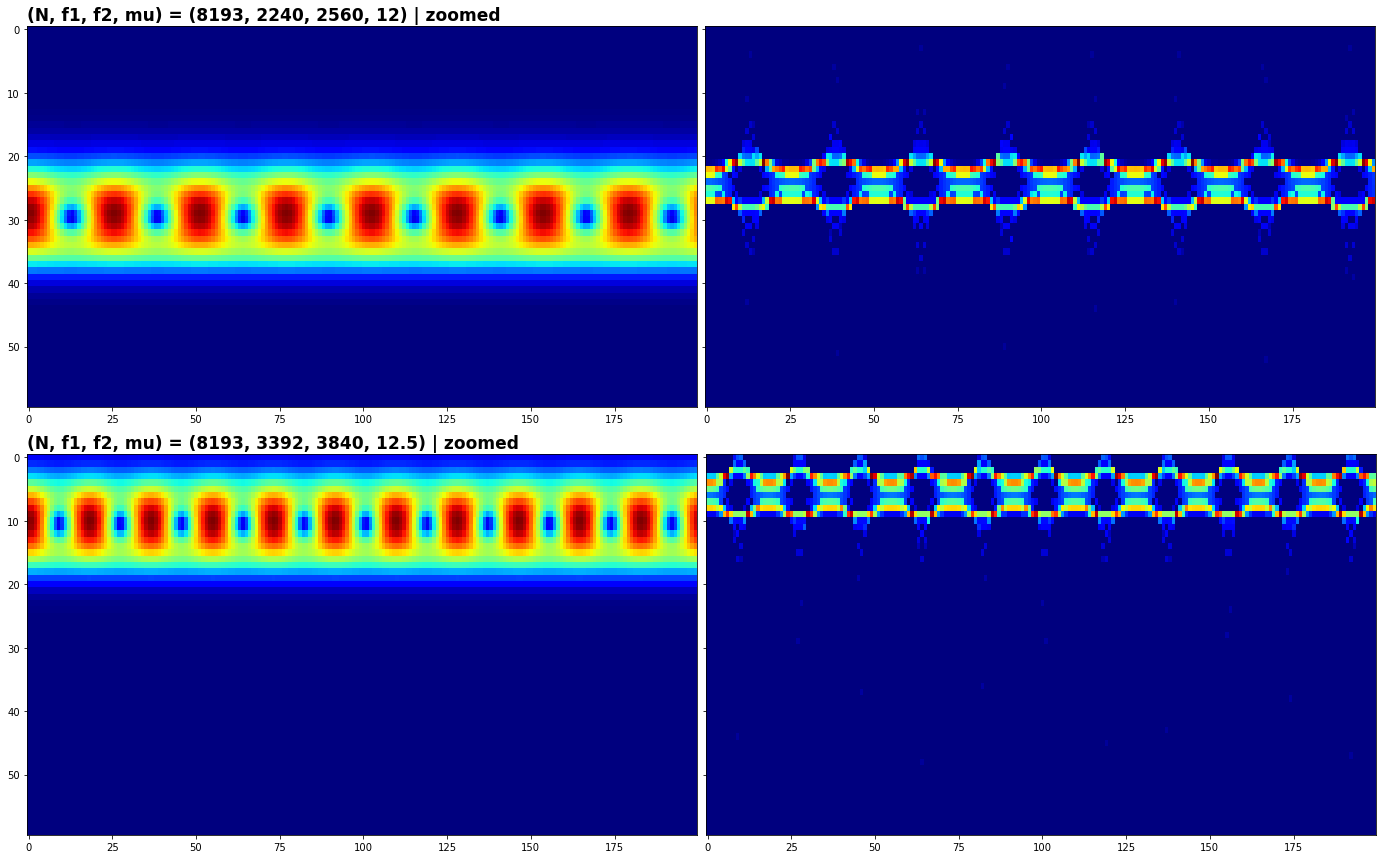 This answer delves deeper into low-level aspects of the phase transform to better understand the wavy phenomenon; complements main answer.

Plot that same row as earlier, of each Wx and dWx, and their ratio: 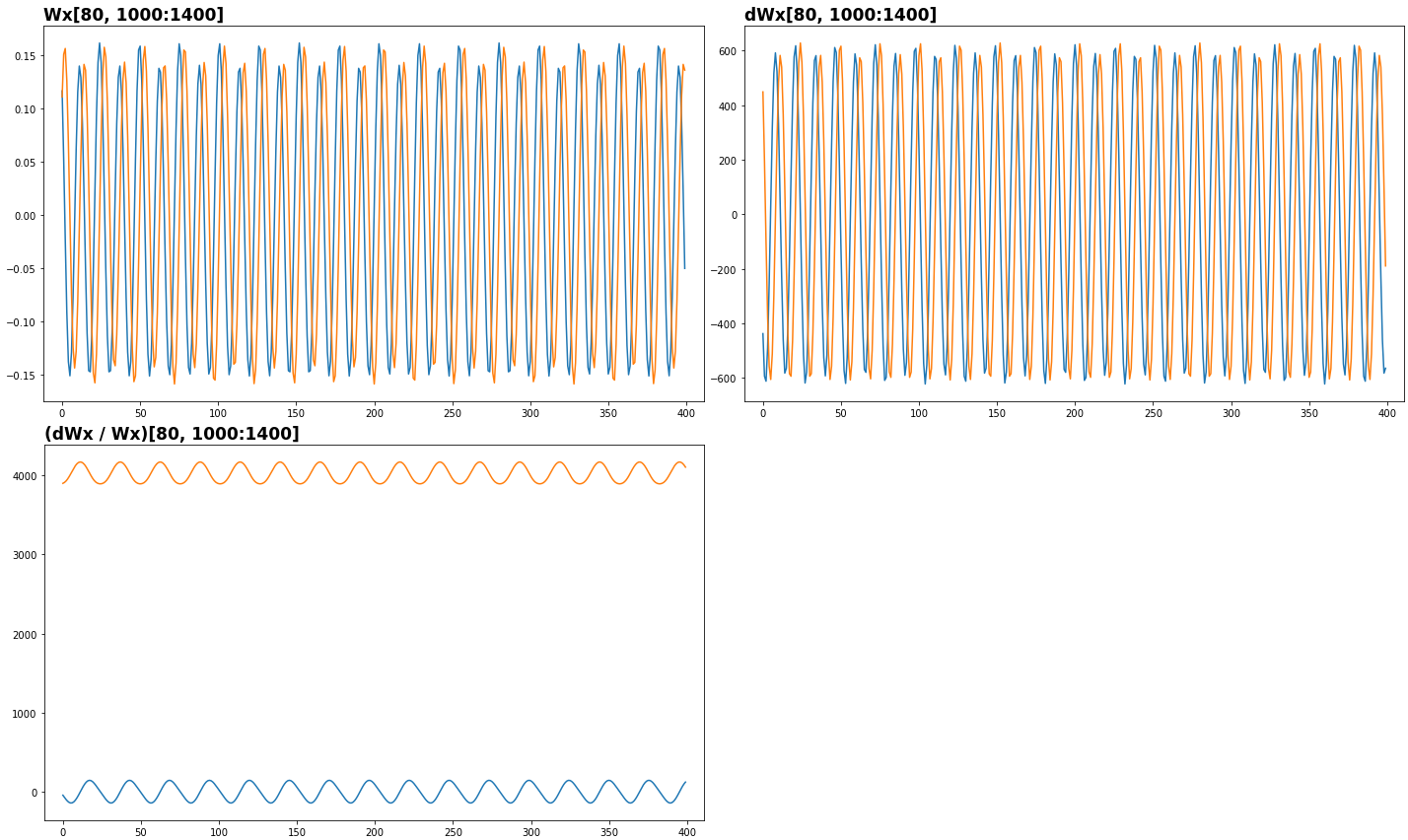 Individually, they seem to be complex sinusoids of different amplitudes, and in ratio, they produce real and imaginary components that also appear sinusoidal, but with differing offsets (not we discard the real part anyway). What's really happening?

Suppose for a moment that these are complex sinusoids; then, in general, we have:

The result is another complex sinusoid, whose amplitude is ratio of the two's, and frequency and phase offset the difference of the two's. But a cisoid's real and imaginary components never have different means; this is enough to rule Wx and dWx out as pure cisoids. Then what are they? Let's plot their moduli, and rescale to plot on same graph:

Interestingly, |Wx| and |dWx| themselves appear sinusoidal, characteristic of an amplitude-modulated cisoid. Note also the moduli are of same frequency, but different amplitudes and offsets (means). The ratio of such sines is another sine - and since the real component is much smaller than imaginary, majority of w (MAPE = .03%) is simply:

i.e. $|a/b|$ ($\Delta \omega = 0$ if the two cisoids are of same frequency, and $\Delta \phi = \pi/2$ from differentiation). But why are the moduli of the same frequency and different amplitudes and offsets? Why are they sine-looking at all?

Necessary background; what's a cisoid with sinusoidal amplitude? A cisoid is just a sinusoid with real/imag component 90-deg out of phase, so it suffices to look at just a sinusoid. It'll be a carrier wave at frequency $f_c$, modulated by a modulator (envelope) at another frequency $f_m$:

Now, a central relation underpinning this mystery and much of synchrosqueezing: AM sine = sum of sines:

I'll refer back to this. For now, we make a prediction: each cisoid, Wx and dWx, isn't pure, but is a sum of cisoids. First answer continues. 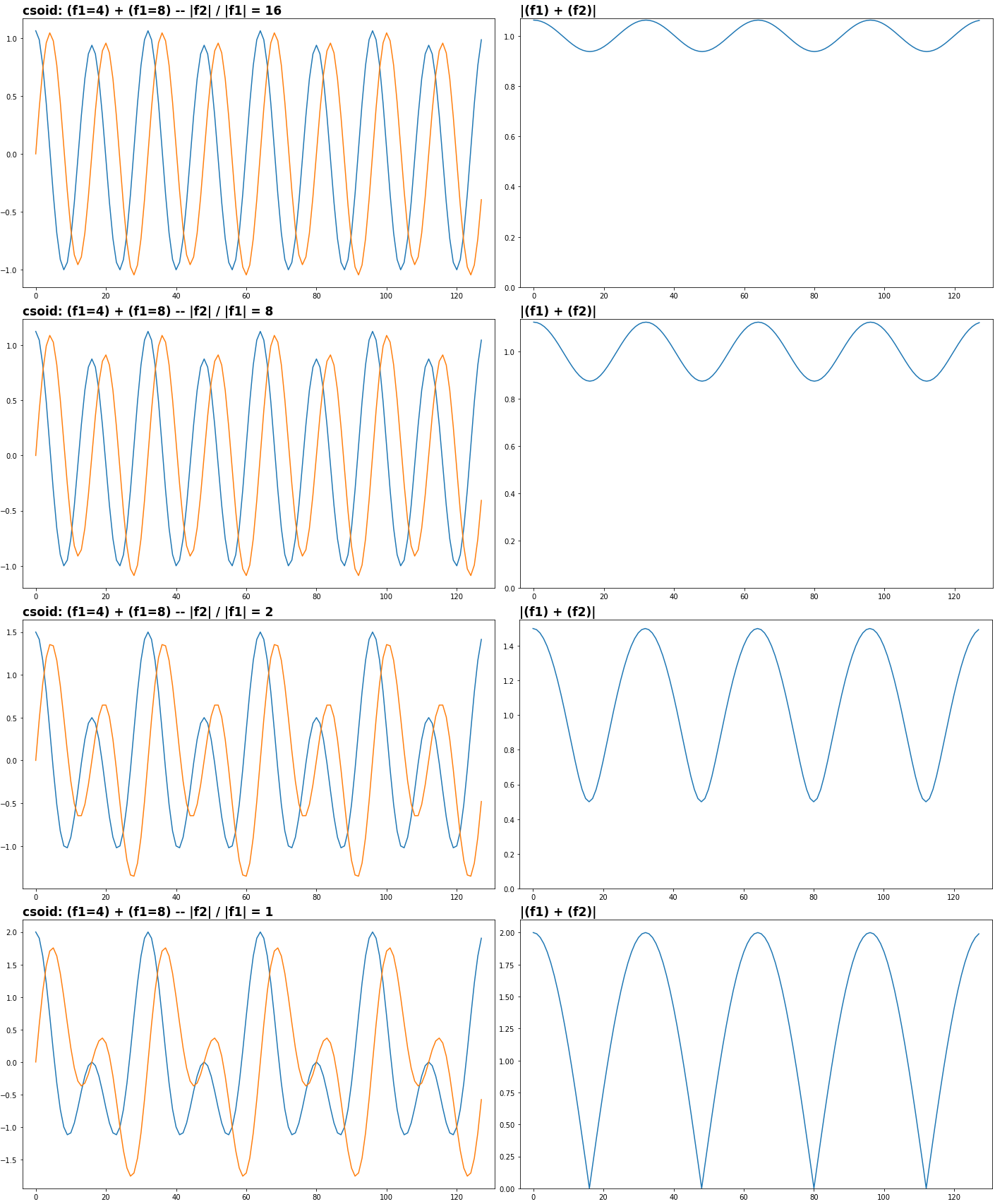 Moreover, the right-side plots should look familiar: they're similar to the row's plots of Wx and dWx earlier. In fact, that's exactly what they are, just at different frequencies and number of samples. What we've shown is, the sinusoidal moduli at "same" frequencies but different offsets result from the pure-real Dirac DFT coefficients; a modulus is then the ratio of sum of complex sinusoids at different relative amplitudes but same frequencies.

Note that while "different relative amplitudes but same frequencies" does imply a different "mean frequency" (or center frequency) for each cisoid, the ratio doesn't seem to care, instead retaining the same frequency for all $a, b, c, d$ in $(4)$:

But of course, nothing beats a proof.

We can show the imaginary part of the ratio $(4)$, and thus the complete phase transform, to be exactly:

Both numerator and denominator are a cosine plus a constant, each individually having the same frequency + dc, and thus in ratio having that same frequency for all $a, b, c, d, \omega_1, \omega_2$. However; "period" is a more apt term, since the frequency here is not that of a sinusoid. This period is exactly:

This concludes the proof. Numeric confirmation in next section. 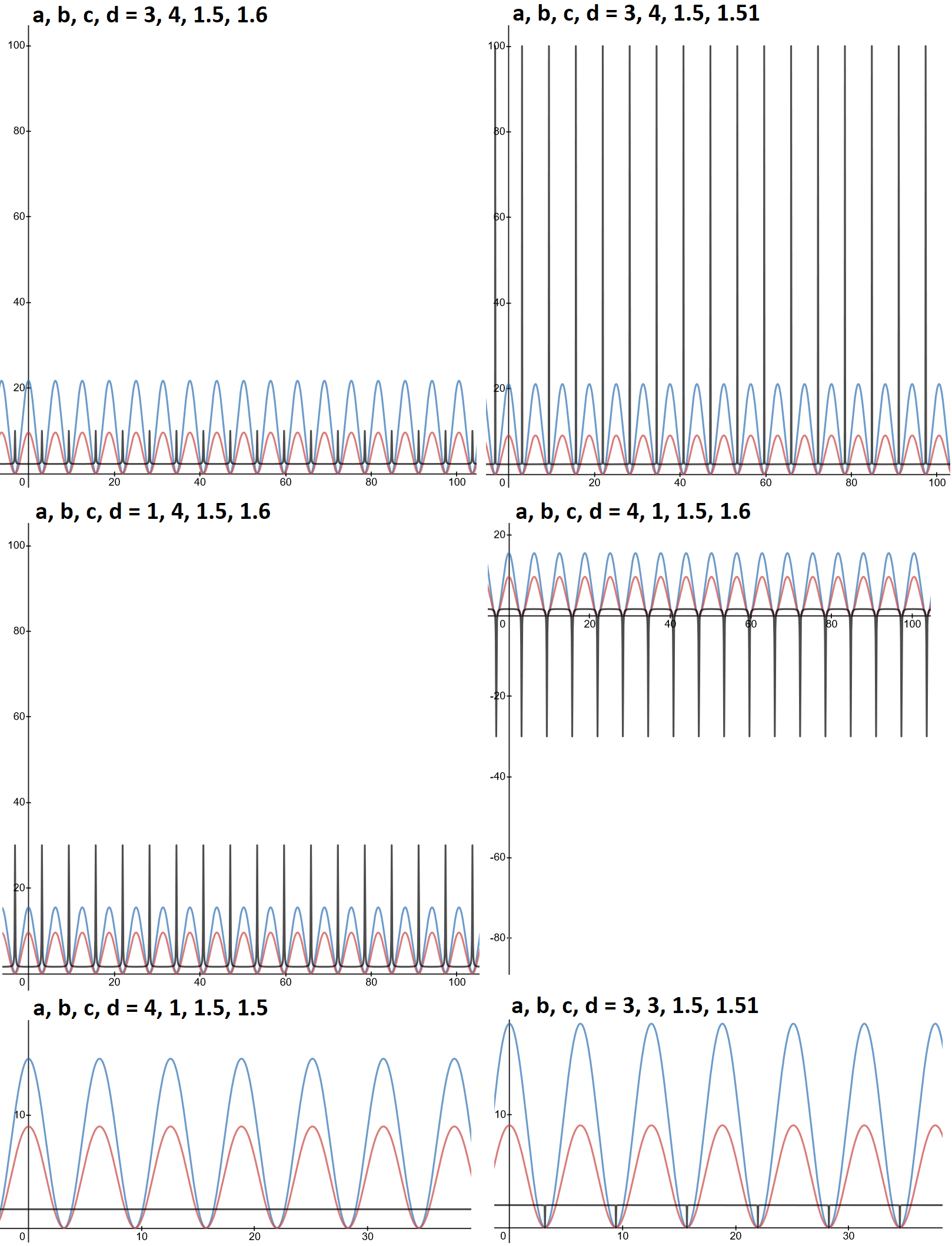 #2 is the explanation for dot-like spots in plots of w at boundary between wavy and flat; it's when the even-symmetric wavelet is centered exactly between the two frequencies. Conveniently, the explosion points get removed by default as part of w[np.abs(Wx) < eps]. In our running example, the wavelet was never exactly centered as such, but was still close; let's visualize raw w (no cleanups):

Still, earlier we saw the row of w looking very sinusoidal; how far off is it? Plotting overlayed:

Very close, but difference is vastly more apparent in respective spectra. You can play around with various $a, b, c, d$ in this Desmos, defaulted to give same ratios as w[80], ratio's multiplied by 10 for clarity. Plotting again overlayed vs true sinusoid:

Based on all above, we should also be able to predict that rows of w will retain the same frequency in neighborhood, but vary slightly in amplitude. And surely enough:

Not the answer you're looking for? Browse other questions tagged cwt synchrosqueezing ssqueezepy or ask your own question.