How to apply cepstrum coefficient gains (BFCC, MFCC) to an input signal?

I'm trying to understand RNNoise (https://arxiv.org/pdf/1709.08243.pdf, https://github.com/xiph/rnnoise). One aspect in particular, the input signal BFCC coefficients and output signal BFCC coefficients are compared to create a "gain per critical band". Then, this gain per critical band is applied to the input signal by applying an interpolated gain term per DFT bin.

The relevant part of the paper is this:

Also, rather than directly estimating spectral magnitudes, we instead estimate ideal critical band gains, which have the significant advantage of being bounded between 0 and 1. We choose to divide the spectrum into the same approximation of the Bark scale [12] as the Opus codec [13] uses. That is, the bands follow the Bark scale at high frequencies, but are always at least 4 bins at low frequencies. Rather than rectangular bands, we use triangular bands, with the peak response being at the boundary between bands. This results in a total of 22 bands. Our network therefore requires only 22 output values in the [0,1] range. 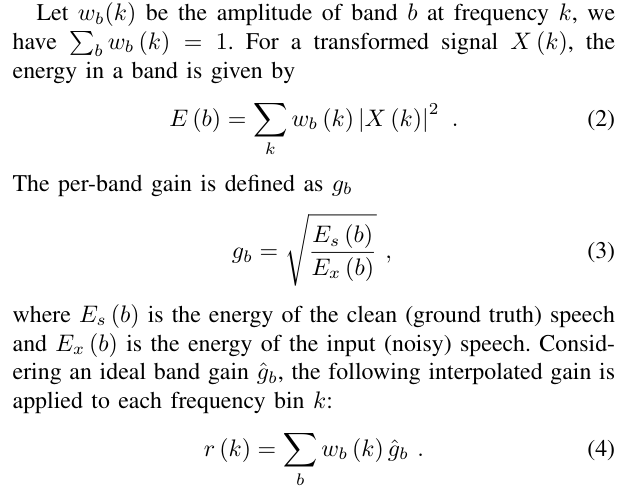 I'm trying to understand now, separately from RNNoise, how I could apply the idea of critical band gains on my own.

The BFCC coefficient calculator takes an overlapping sequence of audio frames, applies a window + spectrum, and generates coefficients. In one specific loop iteration, I will have (pseudocode) 2 frames (from 2 signals), and I want to modify one of them to transform it into the other with a "BFCC gain":

At this point I'm pretty confused as to what the magic function apply_bfcc_gain could look like.

I've had a few unsuccessful attempts.

Some important details are omitted for brevity (namely the overlap-add reconstruction).

This is obviously wrong (and sounds terrible, perceptually). I know it can't be right but it's the only form of solution I can wrap my head around so far.

I could maybe create a filterbank of 24 bandpass filters (with the appropriate frequencies for the 24 bark bands), and use the BFCC gain term as the dB gain, and pass in the input signal.

This is not a technique I'm overly familiar with (but have heard of auditory filterbanks).

I also wouldn't know how to define the Q values.

The code which accomplishes the BFCC gain application is minimal in the RNNoise codebase (but I have trouble understanding it).

Basically a gain term is applied for every FFT bin. The magic is in the function interp_band_gain(gf, g) (https://github.com/xiph/rnnoise/blob/master/src/denoise.c#L150), which takes in an array of 24 critical band gains, and transforms them into a gain per frequency bin which can be applied on the DFT:

I think there's some form of scaled summation of the gains from every possible band at each frequency bin, but I can't understand it.

From the part of the paper I quoted above:

Rather than rectangular bands, we use triangular bands, with the peak response being at the boundary between bands. This results in a total of 22 bands.

In this (simple) illustrated example, the gain applied at the DFT bin of "x" Hz would be:

Can anybody help? Thanks.

I wouldn't even mind blindly copying the RNNoise code, except for this magic array which is unexplained:

This is copy-pasted from Opus code (given that RNNoise uses the same Bark bands as Opus). It's some transform from Bark band edges to DFT indices (in 5ms hops, perhaps?).

I don't know how to derive this for my own set of Bark bands.

Browse other questions tagged filters mfcc cepstral-analysis or ask your own question.

22
How do I interpret the DCT step in the MFCC extraction process?
2
Can't compute real cepstrum of real signal
1
Regarding MFCC feature of a speech signal
1
Why is cepstrum used in MFCC instead of autocorrelation sequence?
2
How to apply a mel-filterbank to a signal?
1
audio signal reconstruction from MFCC
0
The selection of the amplitude of the signal, consisting of rectangular pulses, at different frequencies