Synchrosqueezing is a powerful reassignment method. To grasp its mechanisms, we dissect the (continuous) Wavelet Transform, and how its pitfalls can be remedied. Physical and statistical interpretations are provided.

If unfamiliar with CWT, I recommend this tutorial. SSWT is implemented in MATLAB as wsst, and in Python, ssqueezepy. (-- All answer code)

Begin with CWT of a pure tone:

A straight line in the time-frequency (rather, time-scale) plane, for our fixed-frequency sinusoid over all time - fair. ... except is it a straight line? No, it's a band of lines, seemingly centered about some maximum, likely the "true scale". Zooming, 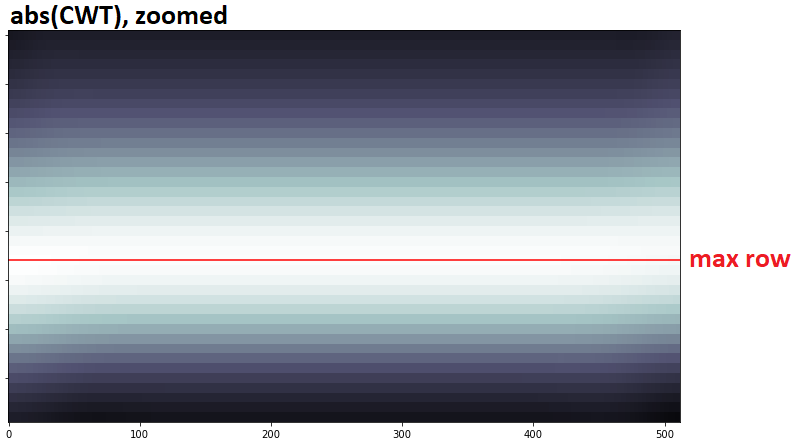 makes this more pronounced. Let's plot rows within this zoomed band, one by one:

and all superimposed, each for samples 0 to 127 (horizontal zoom): 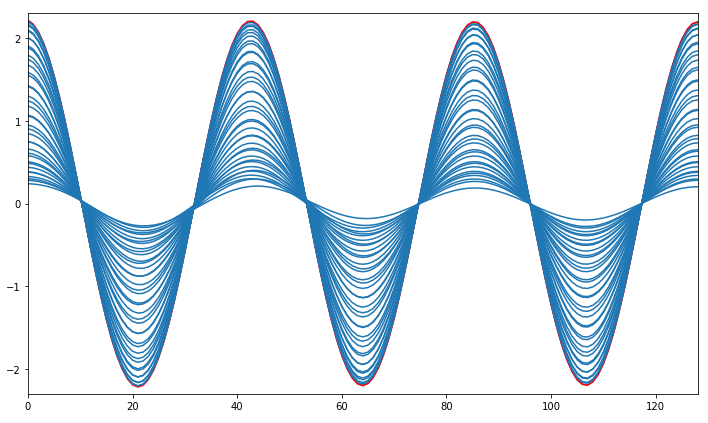 Notice anything interesting? They all have the same frequency. It isn't particular to this sinusoid, but is how CWT works in correlating wavelets with signals.

It appears much of information "repeats"; there is redundancy. Can we take advantage of this? Well, if we just assume that all these adjacent bands actually stem from one and the same band, then we can merge them into one - and this, in a nutshell, is what synchrosqueezing does. Naturally it's more nuanced, but the underlying idea is that we sum components of the same instantaneous frequency to obtain a sharper, focused time-frequency representation. 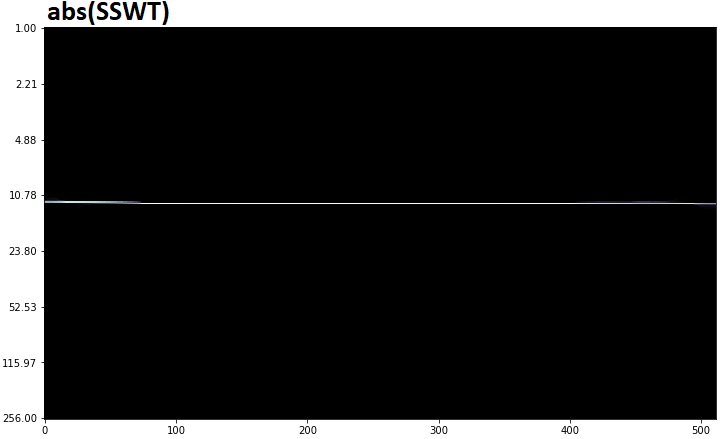 Now that is a straight line.

We have an idea, but how exactly is this mathematically formulated? Motivated by speaker identification and Empirical Mode Decomposition, SSWT builds upon the modulation model:

where $A_k(t)$ is the instantaneous amplitude and

the instantaneous frequency of component $k$, where we seek to find $K$ such "components" that sum to the original signal. More on this below, "MM vs FT".

At this stage, we only have the CWT, $W_f(a, b)$ (a=scale, b=timeshift); how do we extract $\omega$ from it? Revisit the zoomed pure tone plots; again, the $b$-dependence preserves the original harmonic oscillations at the correct frequency, regardless of $a$. This suggests we compute, for any $(a, b)$, the instantaneous frequency via

And that's about it. Essentially, take our CWT, and reassign it, intelligently.

So where are the "components"? -- Extracted from high-valued (ridge) curves in the SSWT plane; in the pure tone case, it's one line, and $K=1$. More examples; we select a part of the plane and invert over it as many times as needed.

What's $(1)$ all about, and why not just use FT? Consider a pendulum oscillating with fixed period and constant damping, and its FT:

What does the Fourier Transform tell us? Infinitely many frequencies, but at least peaking at the pendulum's actual frequency. Is this a sensible physical description? Hardly (only in certain indirect senses); the problem is, FT uses fixed-amplitude complex sinusoid frequencies as its building blocks (basis functions, or "bases"), whereas here we have a variable amplitude that cannot be easily represented by constant frequencies, so FT is forced to "compensate" with all these additional "frequencies".

We seem to gain a lot by ssqueezing - an apparently perfect frequency resolution, violating Heisenberg's uncertainty, and partial noise cancellation ("Notes"). How can this be?

A prior. We assume $f(t)$ is well-captured by the $A_k(t) \cos(\phi_k (t))$ components, e.g. based on our knowledge of the underlying physical process. In fact we assume much more than that, shown bit later, but the idea is, this works well on a subset of all possible signals:

Indeed, there are many ways synchrosqueezing can go awry, and the more the input obeys SSWT's assumptions (which aren't too restrictive, and many signals naturally comply), the better the results.

What are SSWT's assumptions? (when will it fail?)

This is a topic of its own (which I may post on later), but briefly, the formulation's as follows. Firstly note that we must somehow restrict what $A(t)$ and $\psi(t)$ can be, else, for example, $A(t)$ can simply cancel out the cosine and become any other function. More precisely, the components are to be such that:

How would it be implemented? There's now Python code, clean & commented. Regardless, worth noting:

Where to learn more?

The refernced papers are a good source, so are MATLAB's wsst and cwt docs and ssqueezepy's source code. I may also write further Q&A's, which you can be notified of by subbing this thread.

Low-level intuition can be obtained by inspecting the phase transform, visually. Answer complements and is complemented by this one. (-- Answer code) 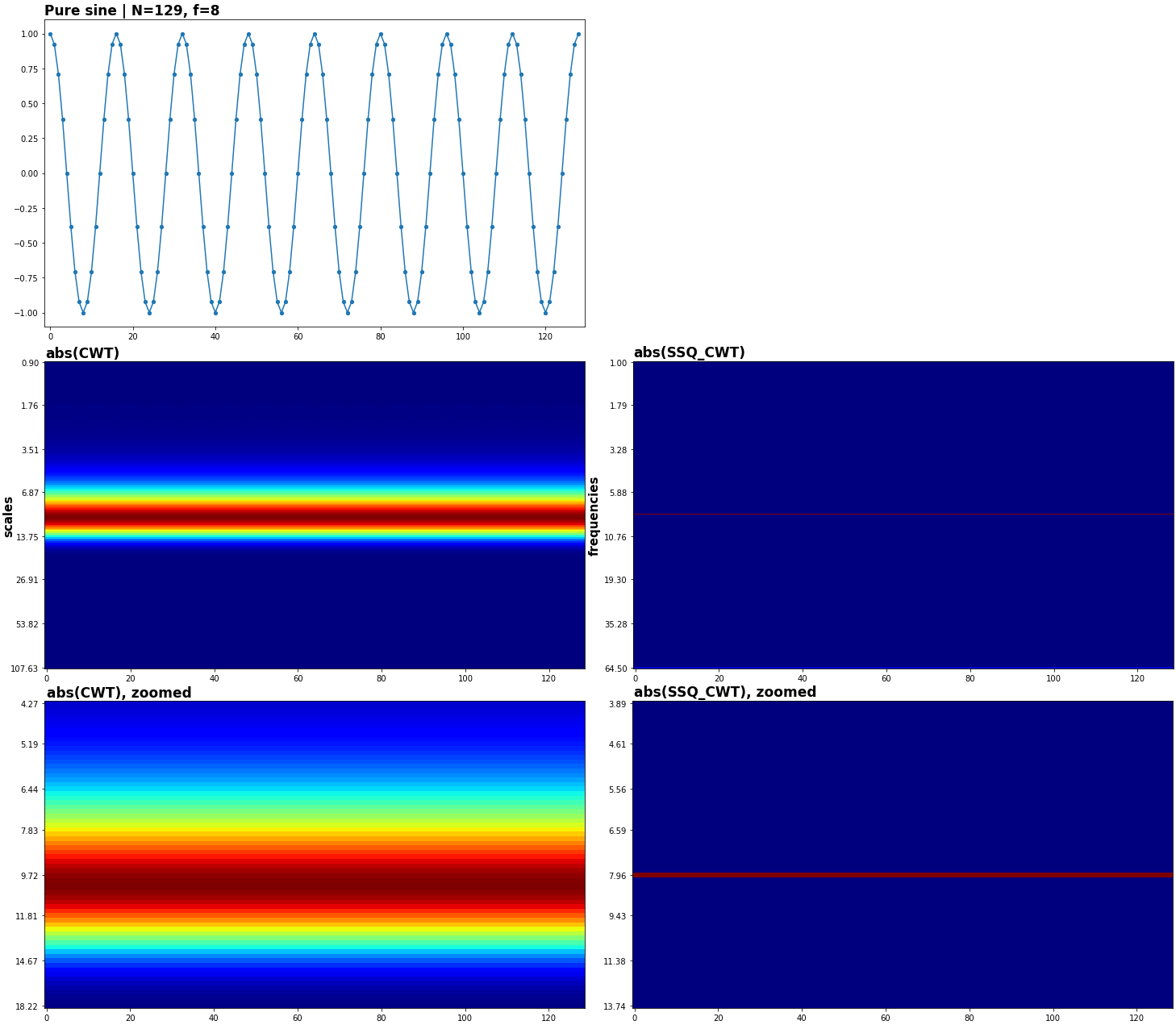 Band of lines concentrated about a maximum in CWT, and a perfect line in ssqueezed right about f=8. Next, the phase transform:

(See "Notes" on the 8.067.) A region of equal values spanning the same range of scales as the CWT, as expected (with 'small' values dropped as usual, see "Notes"). This is the core representation to synchrosqueezing: it says all CWT values in the band get remapped (summed) to the same frequency row.

k is thus the index-equivalent of w. I also has a smoothing effect, in that small perturbations in adjacent rows (scales) per discretization imperfections can get mapped to the same k, as if there were no perturbations ("Notes"). The heatmap of k will look identical to that of w in this case (except now (min, max) == (0, len(ssq_freqs) - 1)).

The synchrosqueezing step is now simply:

Note that we ssqueeze along rows (scales): k[i,] dictates which row k[i,] of Tx does the row i of Wx gets summed to, for every j.

First show k, with y-axis relabeled to use indices instead of scales (arbitrary, helps next step): 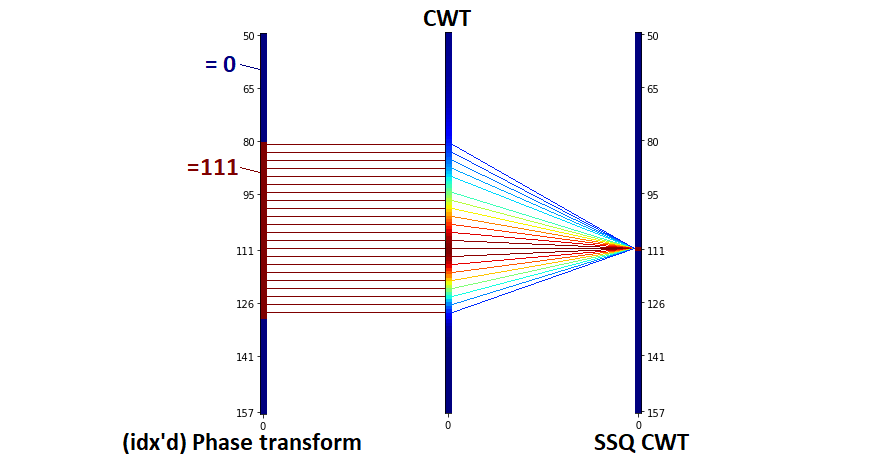 (For full accuracy, we should also be drawing a bunch of blue arrows (lines) from every other row of CWT to row 0 of SSQ CWT - and, be summing Wx (complex) rather than abs(Wx)). This is repeated for every other j, and thus completes the synchrosqueezing of the CWT.

Notice the wavy pattern across timesteps, and the small exponential variation across scales. Why wavy? - covered in complement. Again, this variation vanishes in k (in this case).

Not the answer you're looking for? Browse other questions tagged wavelet time-frequency cwt synchrosqueezing or ask your own question.

5
Estimation of Amplitude, Frequency and Phase of Linear Combination of Harmonic Signal Beyond the Leakage Resolution of DFT
3
Python audio analysis: which spectrogram should I use and why?
3
Continuous Wavelet Transform vs Discrete Wavelet Transform
5
How to Map CWT to Synchrosqueezed wavelet transform?
2
Wavelet Scattering explanation?
2
How does the scale of a wavelet relate to the Fourier frequency (or period) under CWT?
3
Wavelet Scattering properties & implementation?
3
How to decompose a signal into exponentally decaying sinusoids?
3
How to alleviate the edging effect of the Hilbert transform?
2
Computable Time-Frequency Distribution without Cross-Terms
See more linked questions