What mother wavelet should be chosen as an alternative to the STFT?

The Short Time Fourier Transform (STFT) is used to identify time localized frequency content of a signal. The STFT operates by chunking an input signal into blocks and performing FFT on the block, and then recording the frequency coefficients for that point in time. However, the STFT enforces fixed time and frequency resolution which is not always desired.

Let's say I want to use a wavelet transform as an alternative to the STFT. What specific wavelet should I use? Do some wavelets work better for encoding frequency content?

Just because the math is easier, I might recommend the Morlet or possibly the Chirplet as the mother wavelet.

As already answered by @robert bristow-johnson, the Morlet one is quite efficient for many purposes, and the Gabor wavelets are close cousins.

The question of the best continuous wavelet transform is a long standing debate. What is almost settled is that it is preferable to use a complex-valued wavelet, or at least append its dual-Hilbert pair to get complex scalograms.

I remember people promoting the use of wavelets with Poisson kernels, especially for signals modelsof a superposition of delayed dampled sinusoids (eg authors from Identification of sources of potential fields with the continuous wavelet transform: Basic theory).

Recently, J.-M. Lilly and Sofia Olhede described the two-parameter wavelet family of Generalized Morse wavelets. With the two parameters, you can emulate a quantity of known wavelets 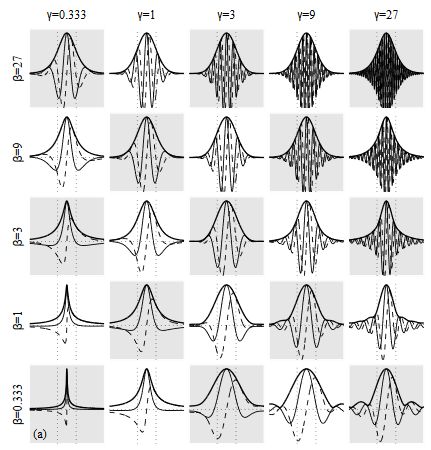 "subsuming eight apparently distinct types of analysis filters into a single common form" (L” for the lognormal wavelets, “C” for the Cauchy wavelets, “G” for the Derivative of Gaussian wavelets, “A” for the Airy wavelets, “e” for complex exponentials, “S” for the Shannon wavelet, “a” for the analytic filter, and “B” for the Bessel wavelet). Generalized Morse wavelets are implemented in Matlab, and I would probably go for them.

Not the answer you're looking for? Browse other questions tagged fft wavelet stft time-frequency or ask your own question.

3
Is "Windowed Fourier Transform" a synonym for "STFT"?

12
STFT and DWT (Wavelets)
2
Other time-frequency-plane tiling than STFT, DWT, ConstantQ-Transform: multiresolution STFT?
1
What's the maximum allowable amplitude modulation frequency for a given carrier frequency?
0
wavelet packet transform and lifting scheme?
1
Are Fast Wavelet Transform coefficients constant if the input signal frequency coefficients are constant?
2
What should the time-shift be when implementing a continuous wavelet transform on a computer?
1
STFT with varying window lengths (like the continuous wavelet transform)
1
How to understand the statistical noise level of wavelet bicoherence?
1
Should i use window with hop_size in Wavelet Transform or Discrete Wavelet Transform?