FFT of a AM modulated signal

I don't understand why the first signal doesn't have a $1 \ \rm kHz$ component on the FFT and why both signals do not have the same period.

Both $\sin(x)$ and $1-\sin(x)$ have the same period, and I can see that signal 1 has the amplitude sinus and the carrier sinus in phase, but I can't get my head around those plots and interprete them correctly. Thanks for all the information and explanation you can provide :) 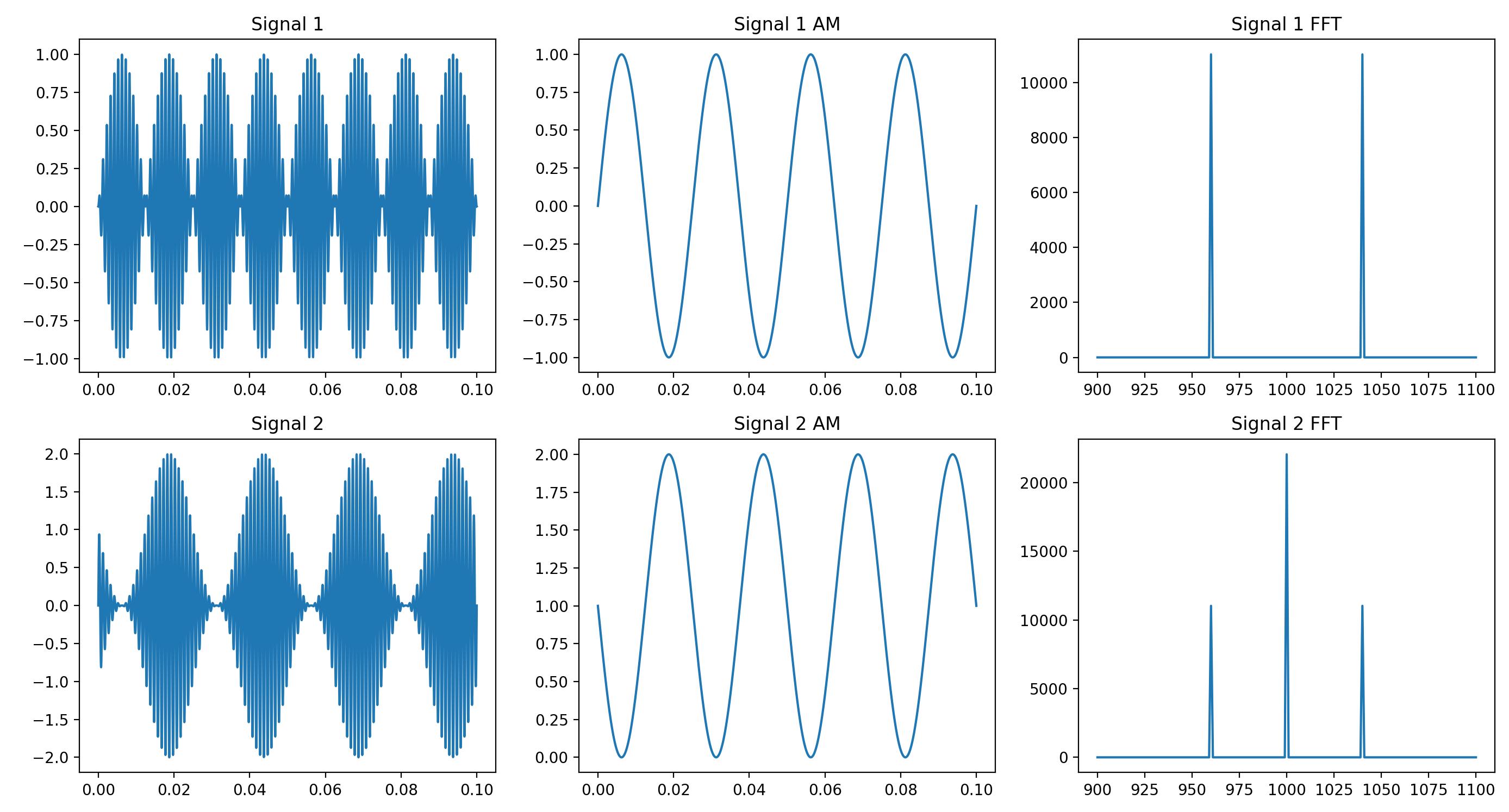 Code snippet to produce the 2 signals:

There two definitions for the AM modulated signals

and the second one is called as the DSB-SC (double side-band suppressed carrier) and is given by:

In your code, you use Eq.2 (DSB-SC) for the first example, and Eq.1 (classical AM) for the second example. Their difference is that the first one includes the carrier spectrum (the middle spike at $f_c$) at the output in addition to the modulating signal spectra (side-band spikes). The latter DSB-SC, however, only includes the modulating signal side-band spectra and not the carrier spectrum, hence the name suppressed carrier.

DSB-SC has the advantage that the tranmission energy is reduced as the permanently radiating carrier energy is saved yielding a more efficient transmission. Whereas the classical AM, which is less energy efficient to broadcast, has the advantage that its demodulation (by analog hardware) is extremely simple requiring what's known as the envelope detector (a diode, a capacitor and a resistance, in addition ot the antenna receiver and audio amplifier circuitry).

Time-domain multiplication of signals that are each a sum of only a few sinusoidal components is simple to understand as frequency-domain convolution:

and then your signal 2: 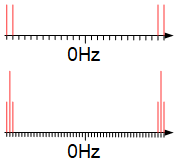 The tick mark patterns are different for the two signals, so the fundamental periods of your two signals differ.

However, the illustrations also show that both signals are periodic with a period that is the fundamental period of signal 2. The tick mark pattern of signal 2 captures also all frequencies present in signal 1.

They do have a 1Khz component, but not via a Fourier lens.

To see what's happening, let's superimpose the AM signals with pure carrier tones: 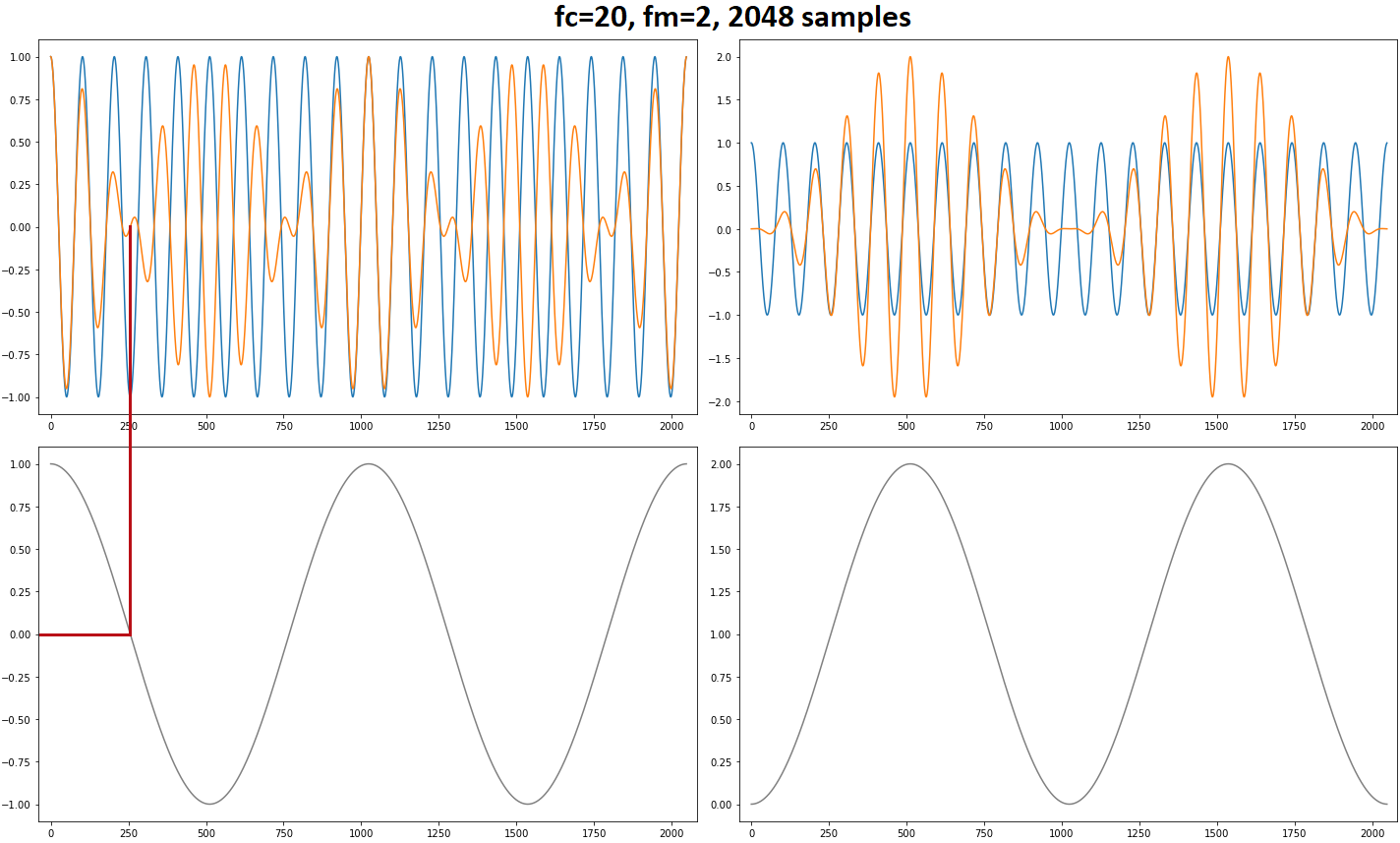 Left plot reveals the key difference between the two AM schemes: polarity. Right is positive-only, left is zero-centered and flips signs. The effect of this sign reversal is, the "wiggling" of the carrier prematurely flips polarity. The red line shows when AM changes (+) to (-); without this sign reversal, we have a would-be positive peak at sample 32 (just as with blue pure tone) - with it, it's now negative.

This "fools" the Fourier decomposition into thinking that it's "more cycles", as that's what it would take to negative-peak sooner under a fixed-amplitude construction. The physical processes are still very much $f=2, 20$.

So the spectra we see are the result of having to represent the signal as a sum of fixed-amplitude frequencies. This Fourier construction is neither always the most meaningful, nor the most useful; I provide more intuition in this answer, and more on why FFT can mislead here and here; ignore the downvotes.

Caveat: if you count the orange peaks you won't find 40 in either case; each bears its own explanation given the AM. It may not be meaningful in the physical sense to decouple AM from carrier globally - e.g. consider what happens at right plot toward edges or right at center, where the AM is zero; an oscillation "skips", changing the "mean frequency" over the fundamental period. The left case shows more peaks, again per polarity flip. You can find more details here.

Further, you'll find slightly more cycles for orange even in the "well-behaved" region (away from AM zeros); it then may vary by purpose, but in an amplitude-decoupled framework this reflects as slightly higher carrier frequency, again more sensible than Fourier's. Lastly, arguably neither handle the case $f_m \rightarrow f_c$ too well in discerning what counts as "carrier" vs "modulator".

On sound: for predicting how we'd hear an AM waveform, a Fourier decomposition is indeed appropriate, as auditory processing is accurately modeled by fixed-amplitude sinusoidal decomposition (though not always), and the amplitude-decoupled decomposition won't apply.

Re: period there may be differences in fundamental periods $T$, but the two will still share a non-fundamental period. Put differently, the expected periodicity doesn't necessarily disappear, rather a smaller period is introduced due to AM to one of the signals and not the other. This is understood again from AM polarities.

Note I said "may"; my dummy example shows how the two can share the fundamental period, but this doesn't happen in OP's example. If there we set $f_m=100$, this is confirmed. Olli's answer fairly demonstrates how exact periodicity can be predicted from FT.

Not the answer you're looking for? Browse other questions tagged fft sound amplitude-modulation or ask your own question.

0
Amplitude modulation vs sampling rate?
2
DFT coefficients meaning?
1
Does Zero Padding Distort the Spectrum of a Signal?
-2
What can be meant by "bandlimited"?