Measuring length of DNA fibers from an image of single molecules

I am a biologist with very little experience with image processing but have sufficient knowledge of MATLAB and have the image processing toolbox. Ideally I am looking for a MATLAB based solution, but an approach outlining how to go about it would also be helpful.

Update (28 Nov 2011) It appears that there are certain problems (such as overlaps in signal and definition of color) when using composite images (which is what I presented in the initial question). I am attaching separate images from the 2 channels: green 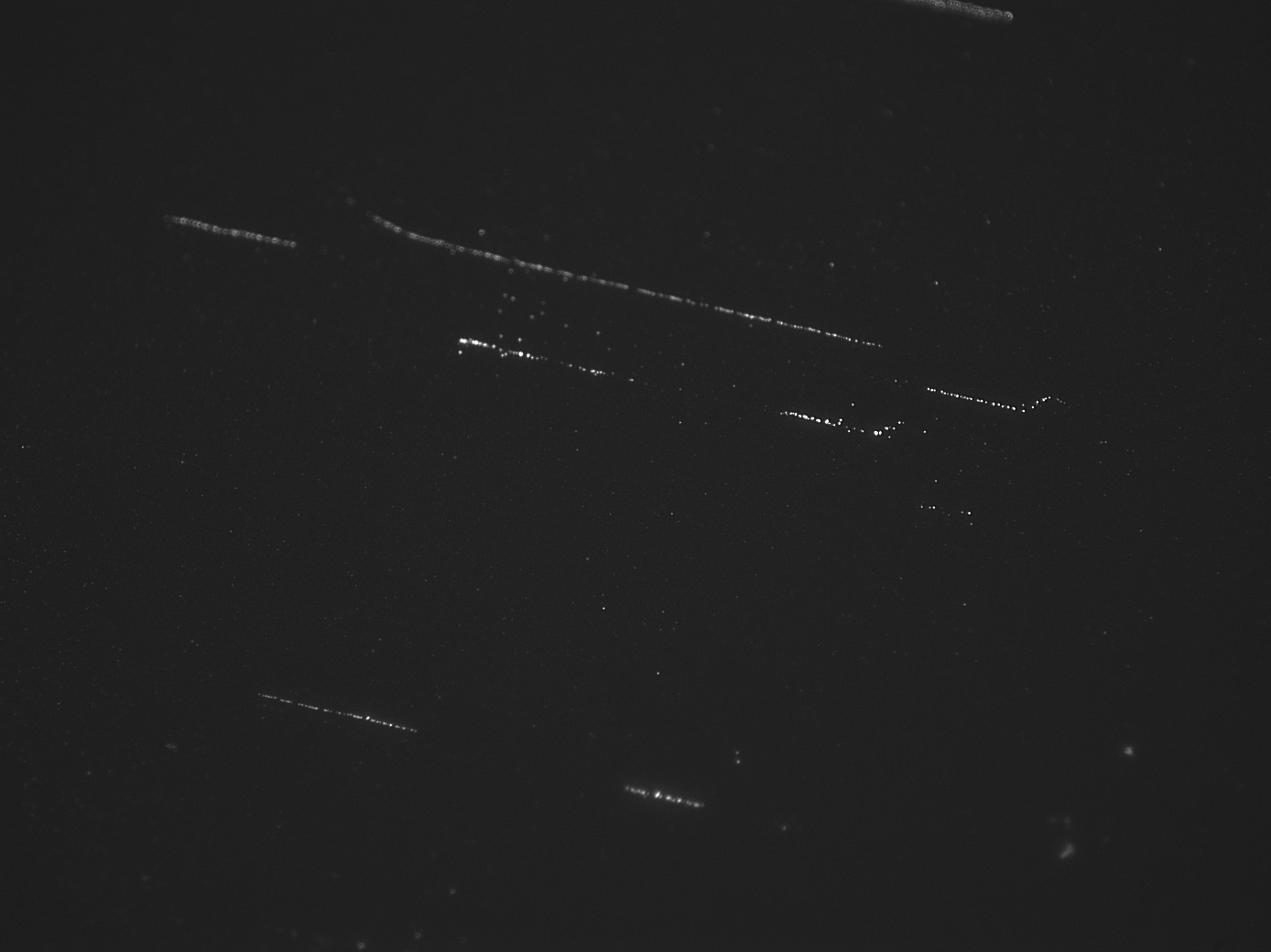 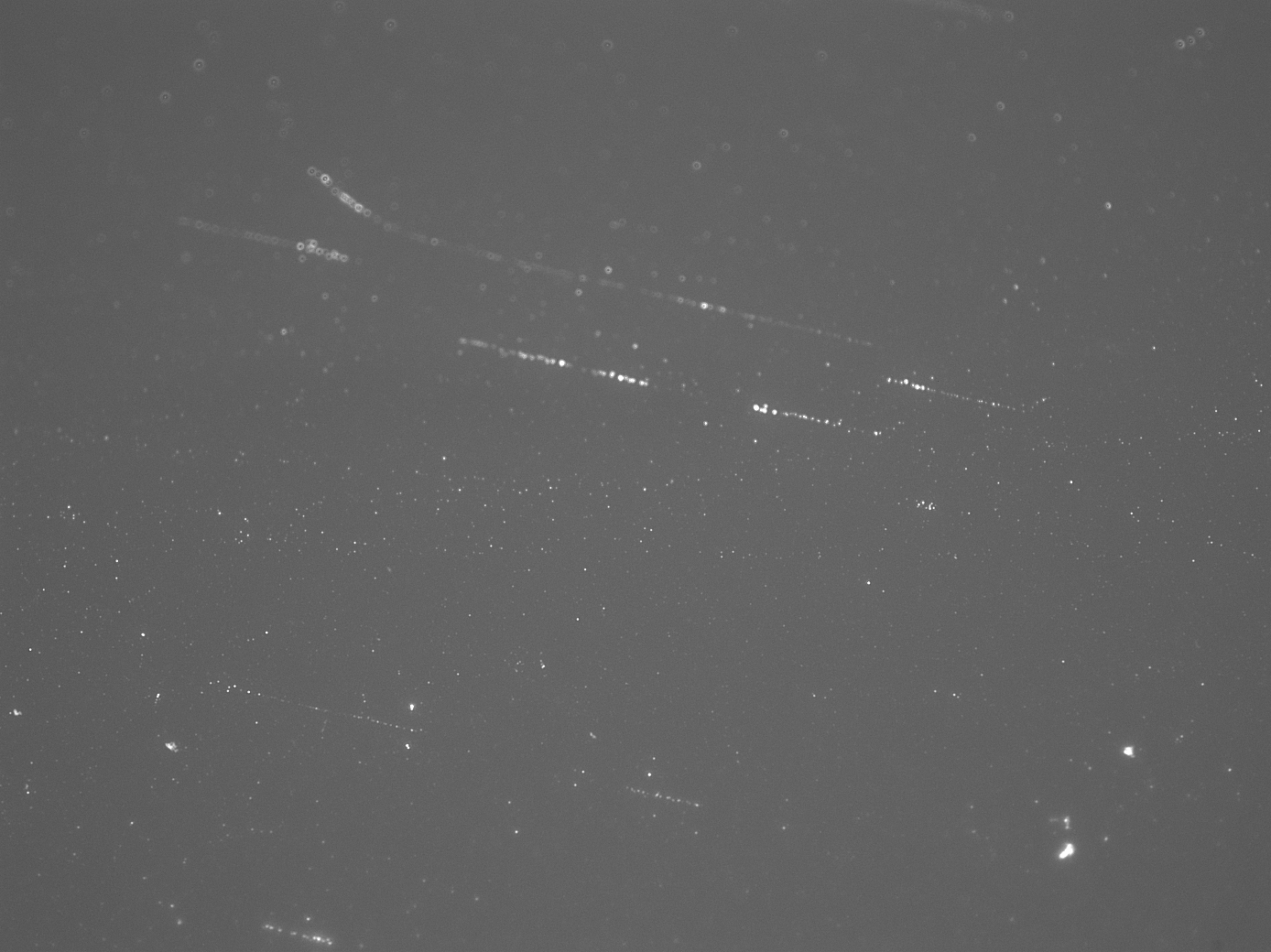 (the turquoise regions in the composite image can be ignored), and the coposite image 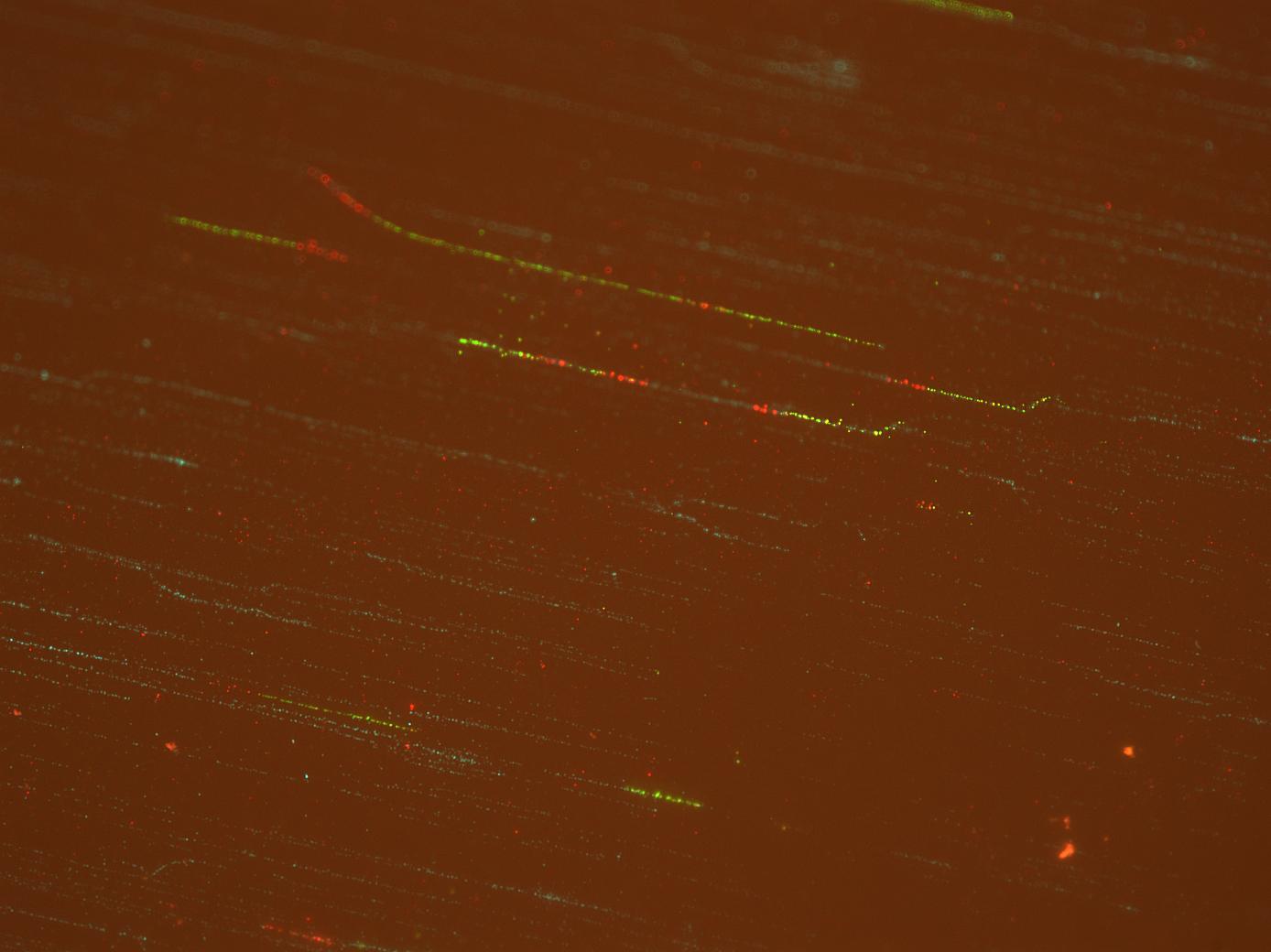 . The red channel is bad for 2 reasons: 1. It has poor contrast due to higher background, 2. Since Red seems to bleed into the green at the background level.

A feature is defined as a region on the composite image that has Green-Red-turquoise-Red-Green or equivalently the 2 adjacent linear segments on the green and the red that are colinear and contagious.

I am hoping that looking at the images from the two separate channels makes identification of the features easier.

I have the following suggestions for the algorithm:

My question relates to extracting feature from an image: 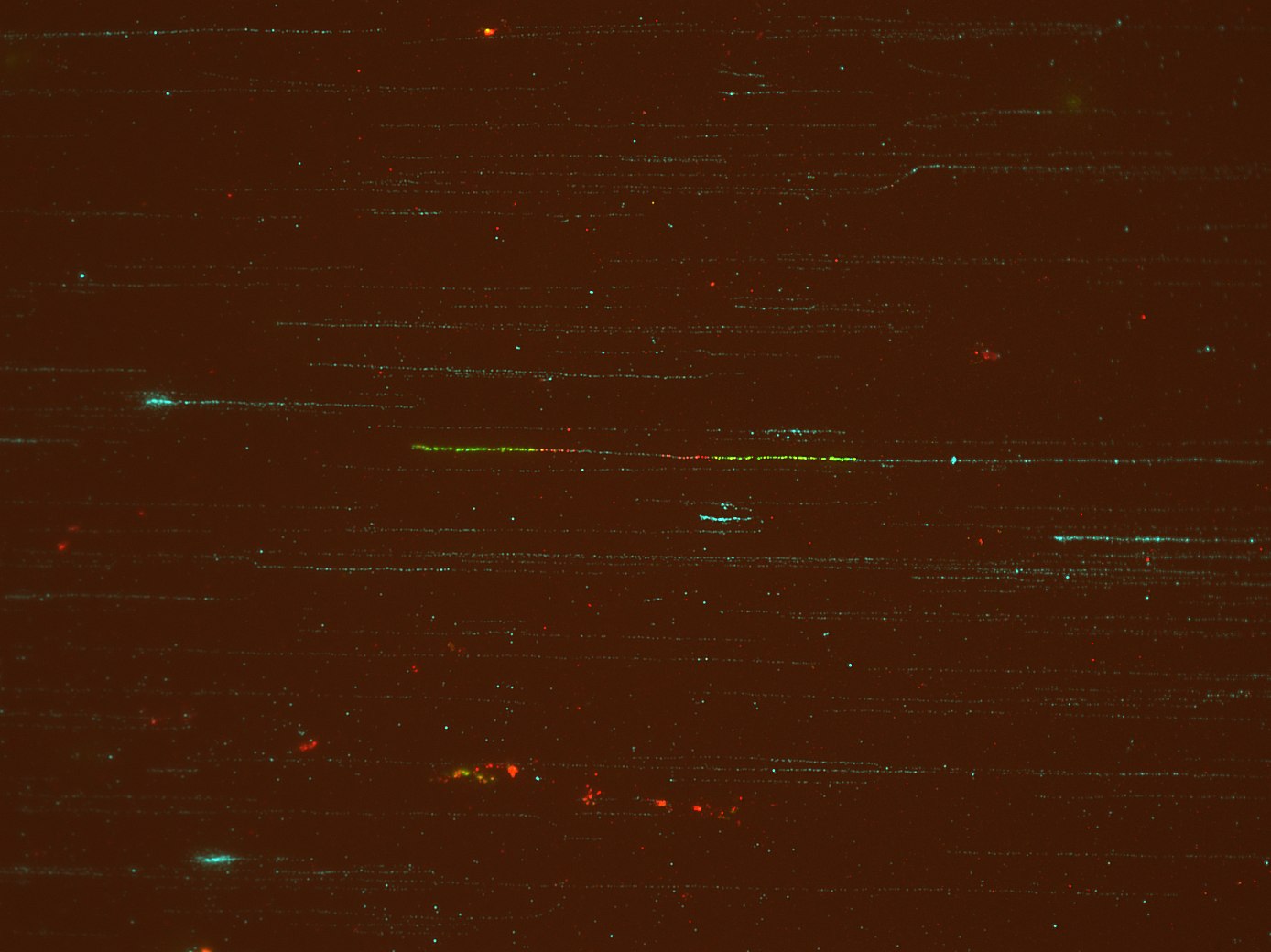 This image is a composite of 3 channels (in tif format): red, green and turquoise. The turquoise colored fibers simply marks all the DNA we have on the coverslip. The feature of interest is the Green-Red--turquoise--Red-Green feature on the single DNA strand that is the middle of the image.

Red is generally the noisiest. This example is good because the contrast is good. However, sometimes the images are not so nice and there is hue throughout the image, so hard-coding a specific RGB value for the green and red color might not work for all images. Also, note that the fibers are not necessarily horizontal, they might be rotated (but never vertical).

Please see this image for an example: 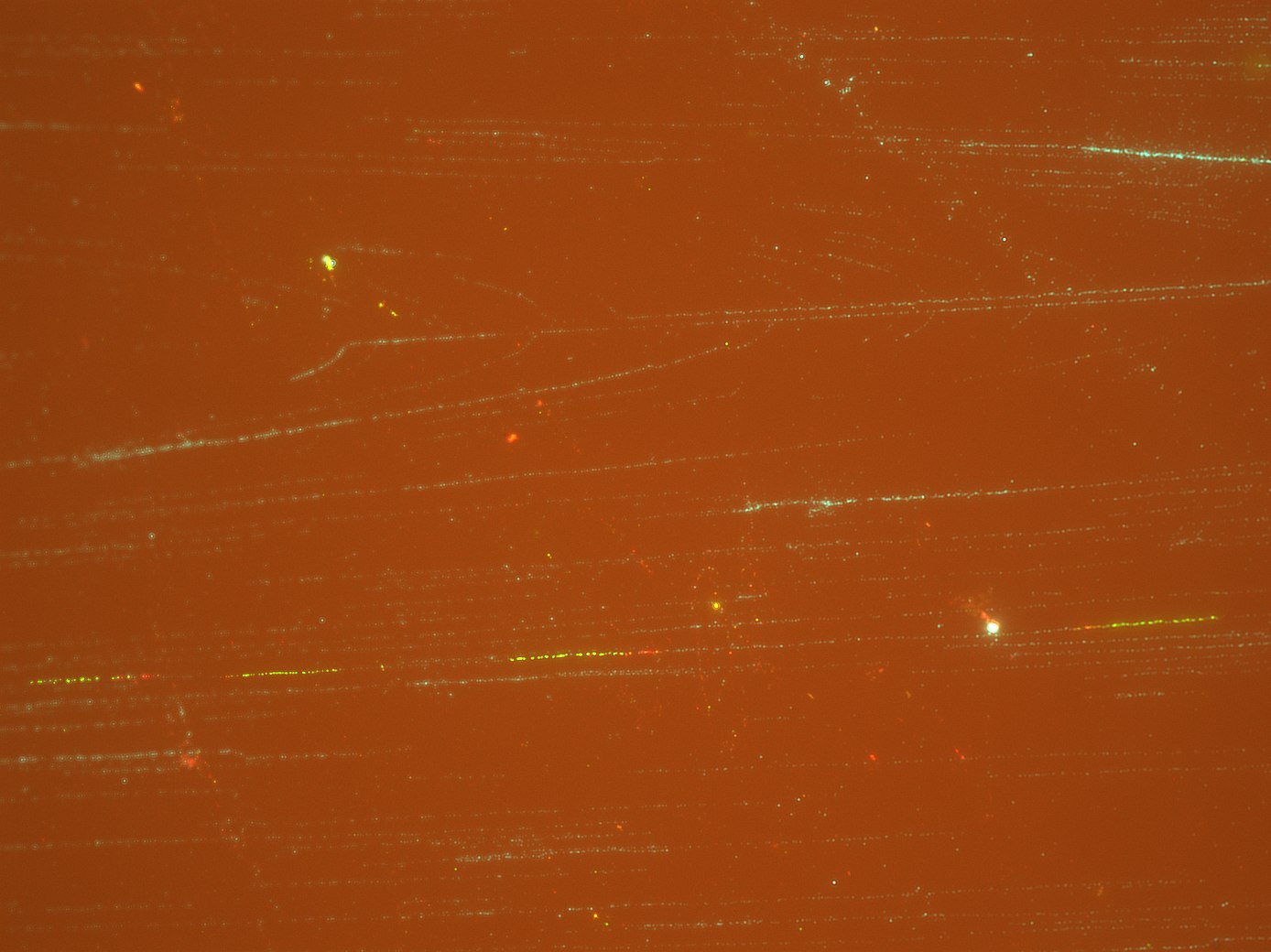 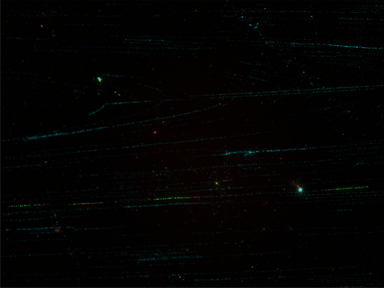 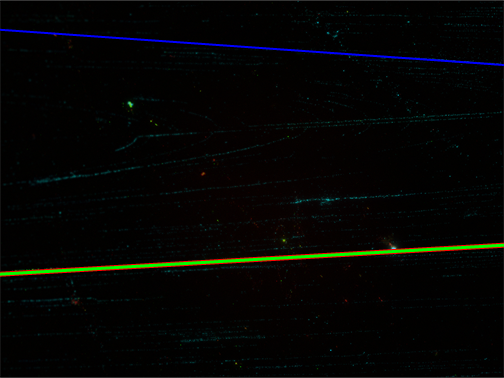 Here you may see the Red and Green clusters apart. As you can imagine, you have to decide when a portion is red!

0
What is the standard way to handle images of different sizes for classification?
7
Removing marker pen artifacts from scanned microscope slide images
3
Is there an OBJECT BASED Image Segmentation method, with pure non-segmented training images?
5
Opencv color segmentation of traffic signs: HSV ranges
0
python: how to compute the gray level histogram features as mentioned in the paper, and
1
How to partition collagen into separate fibers?
0
Transforming RGB images including NIR to LAB
0
Fixing edge/pixel defects in image