Is this an energy or power signal? 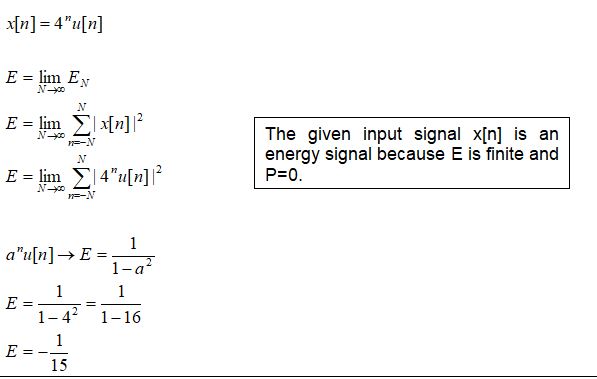 Is the given input signal x[n] an energy or power signal?

The image shows what I did so far. Is it correct?

I solved it again, please tell me if I did it correctly this time.

Since both P and E are infinite, then it is neither an energy or power signal.

As a complement to Matt's answer, on the intuition: $u[n]$ has value $1$ from $n=0$ on. So basically its energy will increase for ever, because it keeps adding ones for $n\ge0$. Then, you build another signal $x[n]$ that grows way faster because you multiply it with the exponential term $4^n$.

Therefore, only at the common sense level, one cannot expect it to be an energy signal. It is not feasible.

And then, goes the proof that the sum of the series actually diverges. I would suggest to use the simplest proofs, to avoid complexities, and formulae that are not valid (sum of geometric series for $a \ge1$).

Of course, as Matt said, if the exponential term becomes $4^{-n}$, this geometrical series then decreases fast to zero, and wins over the mere sum of ones in $u[n]$.

It's always good to do some plausibility checks on your results. The energy of $x[n]$ is computed by summing up the values $|x[n]|^2$. Each one of these values is non-negative, so if you end up with a negative value for the signal energy, you should ask yourself where you went wrong (unless your name is Ramanujan).

Check the conditions on the number $a$ for which your energy formula is valid. As a final note, if a signal is not an energy signal it is not necessarily a power signal.

Not the answer you're looking for? Browse other questions tagged discrete-signals homework signal-power signal-energy or ask your own question.

3
Why the power of periodic signal is square?
4
How to calculate the power of a discrete signal? / Clarification on PSD estimates
1
Steady state value of a complex convolution
11
Inconsistency between the units of power spectral density and the definition that people often give
1
Fourier Transforms, Convolution, Cross-correlation: what is their physical unit exactly?
3
Output of a stable LTI system
1
Different values when calculating signal's energy by hand vs MATLAB