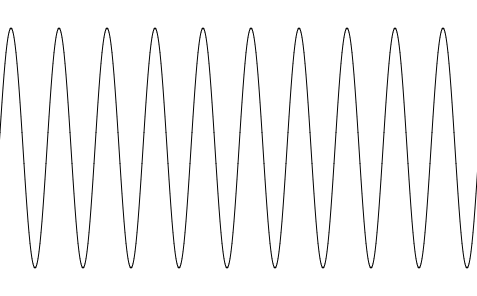 The problem is when I increase the freq (try to set var freq = 50 for example): 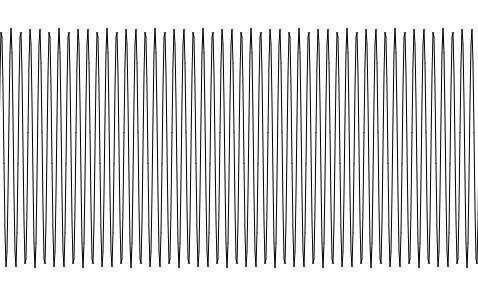 lots of ripples, it becomes distorted and not so good as plot. If I increment it more, even worse (var freq = 8030 for example is terrible). When I see those kind of graph on pro systems, they are displayed just fine.

How would you improve it? FFT, splines, whatever? Which is the right approch?

I don't really need accurancy (i.e. for waveform analysis or whatever), just plot it nicely (as in Desmos https://www.desmos.com/calculator/eodkjlywjh, for example).

For a given «visual accuracy», you need to sample the sine at a sufficient number of time-steps per period.

At some point the display pixel density will be to low to render a sine accurately.

For waveform editors (that usually have access to only a finite rate sampled waveform, not a continously defined trigonometric function), I assume that some practical approximation to the sinc(x) function is used to interpolate those samples to the desired density. There is still a question of what to do when the display is the limiting factor, rather than the input.

If you're really generating a pure sine, you know the amplitude and can force the peaks of a half-cycle to draw at the intended peak.

If the waveform is more complex, you can generate it at a sufficiently high sample rate. The issue with drawing is that you can't necessarily plot consecutive samples and still have enough of the waveform in view, horizontally, to see as much as you want. That's OK, you can consolidate multiple samples into a single pixel-wide space.

For instance, you can view 2000 samples in a 400-pixel-wide view by using five samples per point on the time axis. One way that works well in general is to scan five samples for min and max. You could then draw a vertical line at that time-axis point to represent the range of values. That way, the waveform would look more regular.

As the waveform sampling rate increases, the closer you are to getting all the points in the analog version of the waveform. The more horizontal resolution you have in you graphing view you have less you'll end up with longer vertical range lines—the most ideal being one for one, of course, in which case they are always points.

Not the answer you're looking for? Browse other questions tagged fft resampling or ask your own question.

3
Fourier transform 4 times = original function (2D and higher)
2
removal of blackman harris window results in signal higher than expected
0
What are the implications of resampling the derivative of a signal with a higher frequency than the original signal?
2
Higher-order Kronecker product
2
DC and Nyquist values are higher than all other bins
0
does ifft of higher order equal upsampling signal
0
Amplitude decrease in FFT at higher frequency for multisine
0
Why not use 'higher power of 2' radix FFT?