Is Bluetooth Low Energy jamming possible with an SDR like the HackRF on GNURadio?

It seems like BLE jamming is technically possible by just jamming the 3 advertising channels 37, 38 and 39 https://github.com/lws803/BLE-jammer and it has been proven to work on an STM32 + 3x NRF24l01 transceivers. Can the hackRF switch between these 3 frequencies fast enough to produce a consistent jamming effect?

Disclaimer: I understand that this is illegal and I would like to know about this for educational purposes only.

I am not revealing any big secrets here on jamming and anti-jamming techniques, nor would I condone creating any such interference. What I am about to say is quite simplistic and well known, but knowing more details in how jamming can take place and being more educated on it in general can help good actors in minimizing vulnerabilities in future designs.

Yes this is completely feasible but I would do this much more simply:

Create a single sinusoidal tone at 15 MHz and at 39 MHz.

Upconvert this tone using a carrier at 2441 MHz.

This will produce two symmetric sidebands with a tone at:

So there is one additional channel rather than just the targeted three channels in the hopping approach, but still significantly better and more effective over trying to jam the entire spectrum from 2402 to 2420 MHz, and conveniently the suppressed carrier that is at 2441 MHz is in between channels.

These tones themselves can be modulated if necessary to spread the energy over the channel bandwidth, since single tone jammers can be easily defeated with tone excision. By spreading the bandwidth, it becomes a simple SNR competition and it can't be defeated given sufficient energy, as the duration of the signal occupation will be continuous in time. 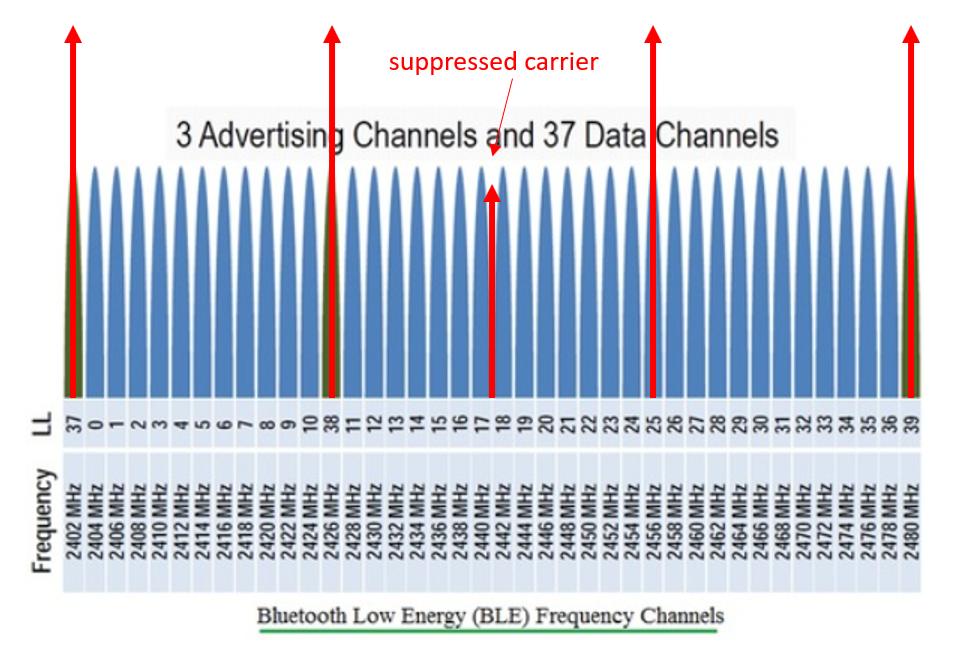 If no sources were readily available, below shows a feasible implementation for comparison to alternative approaches. A custom 2 layer circuit board layout would be sufficient and is \$65 from Express PCB , (the sensitive RF areas should be minimized in pcb track lengths, and for this application there would be no issue implementing this design on such a pcb with attention to proper RF layout techniques in those areas)- so a total cost of \$127 not including the low frequency noise source or DC supplies and DC control voltages. For single tones the low frequency noise source can be replaced with the same circuit as shown for the 51 MHz LO since the crystal oscillator (XO) can also be programmed for a 12 MHz output frequency. The noise source (modulated and filtered 12 MHz waveform) would be ideal for jamming purposes. The optional "carrier nulling" shown is a small DC offset (coupled in with a resistor) that can be adjusted to null any residual carrier feedthrough leakage at 2441 MHz if desired. Not shown in the spectrum above, but this would also result in suppressed carriers from the first upconverter stage in the output at 2413 MHz and 2467 MHz (also conveniently in between channels). The nulling control for this is in having a small DC offset control in the originating noise source. The nulling is feasible (and effective!) since the IF ports of both mixers have a response to DC. 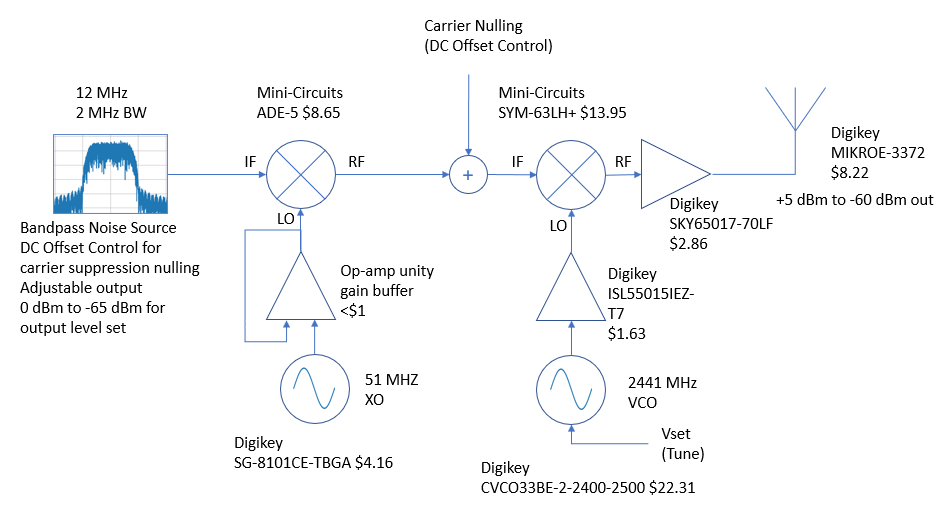