I am doing distance measurements by transmitting a 100 kHz tone and receiving it and measuring the phase difference.The distance is simulated by a delay simulator which is very precise (around 10 psec) The 100 kHz tone is PM(Phase not PSK) modulated with an index of 1.1 rad and upconverted to 70 MHz. Then it is received downconverted and demodulated. Everything seems fine except the phase difference varies within 0.15 degrees which is quite high as the tone has a high SNR >30 dB.

The steps leading to obtaining the phase difference are:

At this point I get variations in phase difference around 0.15 degrees while there is no change in the distance.

I suspect there is something wrong with the steps above. I don't want to use a PLL instead FFT.

The OP mentions "demodulating" but I don't actually see that in the process (meaning the phase modulation is not actually removed). Without demodulation the signal can possibly be spread across multiple DFT bins thus reducing the SNR in the bin that was used to measure the phase. If the signal bandwidth is less than one bin, and the noise is still white, then there would be further increase in SNR by the rate of $\sqrt{N}$ by increasing the number of samples by $N$.

And using the modulation index $\beta$ which is the peak phase angle (for sinusoidal PM) and related to $\Delta F$ and $F_m$ according to:

From \ref{1} and \ref{2} we can establish the occupied bandwidth from the modulation rate and modulation index directly as follows:

From this we can confirm if the occupied bandwidth exceeds the resolution bandwidth of the measurement, at which point the SNR from a single bin will be maximized as limited by the DFT noise floor. If the occupied bandwidth is less, and the DFT noise floor still white in close proximity to the signal (meaning the signal is sufficiently stationary over that duration of time), then there will be a further improvement simply by increasing the number of samples.

The resolution bandwidth for each bin in the DFT given in Hz is given by the following formula as the "Equivalent Noise BW":

Computing the ENBW of window functions is detailed here: Find the Equivalent Noise Bandwidth. The equivalent noise BW of the Blackman Harris window is approximately 1.7 bins, so the equivalent noise bandwidth in Hz with the 10 MHz sampling rate and 32768 bins would be:

So continuing the assumption of $F_m \le 123 \text{ Hz}$, with a phase variations of 0.15° and no motion (meaning this is phase noise); assuming the 0.15° was an rms measurement, that would be equivalent to an SNR as limited by noise due to phase of:

This is a 51.6 dB SNR in the resolution bandwidth of 518 Hz; if the signal for which the DFT was computed was real, then the SNR of the signal would be 3 dB higher given it would be at both bins 327 and 32441 and only one of those two bins was used for the measurement. The OP has not stated what bandwidth was used for the original 30 dB SNR metric of the signal, but this approach as outlined can be used to further quantify if the process is noisier than expected, or not. If the variation in phase was anything else such as peak to peak or peak measurements would translate to an even higher SNR, but that should be clarified as well for an accurate assessment. This should also help quantify the SNR requirements for a certain phase accuracy as needed for the final distance measurement.

When such phase noise is small, the small angle approximation $\sin(\theta) \approx \theta$ applies, thus the rms of any phase noise when normalized to the signal (typically given as "dBc") is the SNR when both units are squared to be power terms (hence $20Log_{10}(\theta_{rms}$)) 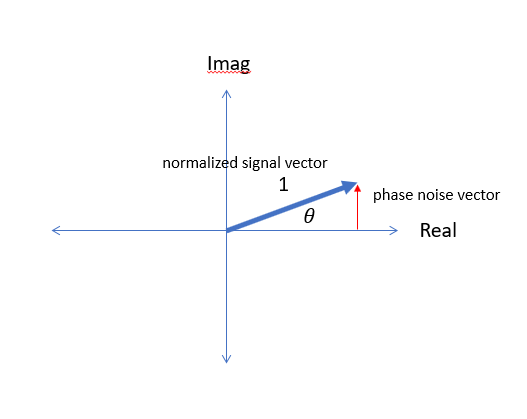 Not the answer you're looking for? Browse other questions tagged fft dft phase radar or ask your own question.

4
Phase measurement
3
Detection of low frequency signal
0
How to design a digital filter with a frequency dependent phase delay?
4
Evaluation of phase difference between two acquired signals (expected to be sine waves) with the same frequency
0
Phase difference measurement of a 100 kHz tone
3
Why is my resonance phase lag discontinous?
1
Adding phase noise to a signal results in amplitude variation on a constellation - whats the mistake? *plots inside*
1
Resolution of phase measurement using cross Correlation