What can be meant by "bandlimited"?

Is there a different way to define "bandlimited" other than via the frequency domain?

Post's structured addressing an originally different formulation of the question, "agree" and "disagree" responding to "can a bandlimited signal amplitude-alias?" - but still answers the current question.

If the actual, continuous/analog signal has no continuous Fourier transform frequency components above $f_s / 2$, then there can be no aliasing. This is explained in detail in Dan's answer.

Put differently, an $s(t)=A(t)\cos(\omega t)$ with amplitude $A(t)$ that samples to the observed waveform would necessarily have CFT components above $f_s/2$, whereas we assume there are none.

Because Fourier isn't alpha and omega. I said the signal is bandlimited, or having a finite range of frequencies; I never said these were Fourier frequencies.

Does this matter in practice?

Absolutely. Consider a damped swinging pendulum, whose measurements we have (assume without noise). Don't assume constant damping; just assume it never changes the cycle periods (left & right stop times). At what frequency is the pendulum swinging? Suppose it's actually 2 / sec, but we don't know that.

There's no way to spin the story or measure differently that wouldn't result in the Fourier interpretation telling us "it's 2 and-some!" And the "some" can be 4, 8, 40, or more - an entire nonzero distribution of these.

Does this make much sense? Do we get an accurate representation of the physical process? Absolutely not; there are no $f=8, 40$, and the other frequencies. These are what's demanded by Fourier bases assuming fixed amplitudes, and is precisely what this warmly-received answer further illustrates.

With an EMD lens, however, we get a much cleaner and sensible representation: $A(t) \cos (4\pi t)$, with the one frequency of the actual source process being clearly captured, and amplitude can now be analyzed independently for various factors.

Let me repeat: there are no higher (or lower) frequencies in the physical process, and $\mathcal{F}$ will strongly beg to differ.

My own application is what motivated the question to begin with.

The goal is to preprocess EEG data as a "feature extraction" step before feeding it to a neural network for seizure classification. As such, it's critical I meaningfully interpret the interactions of used transforms with data.

Below are two different Continuous Wavelet Transform implementations applied to the same signal: 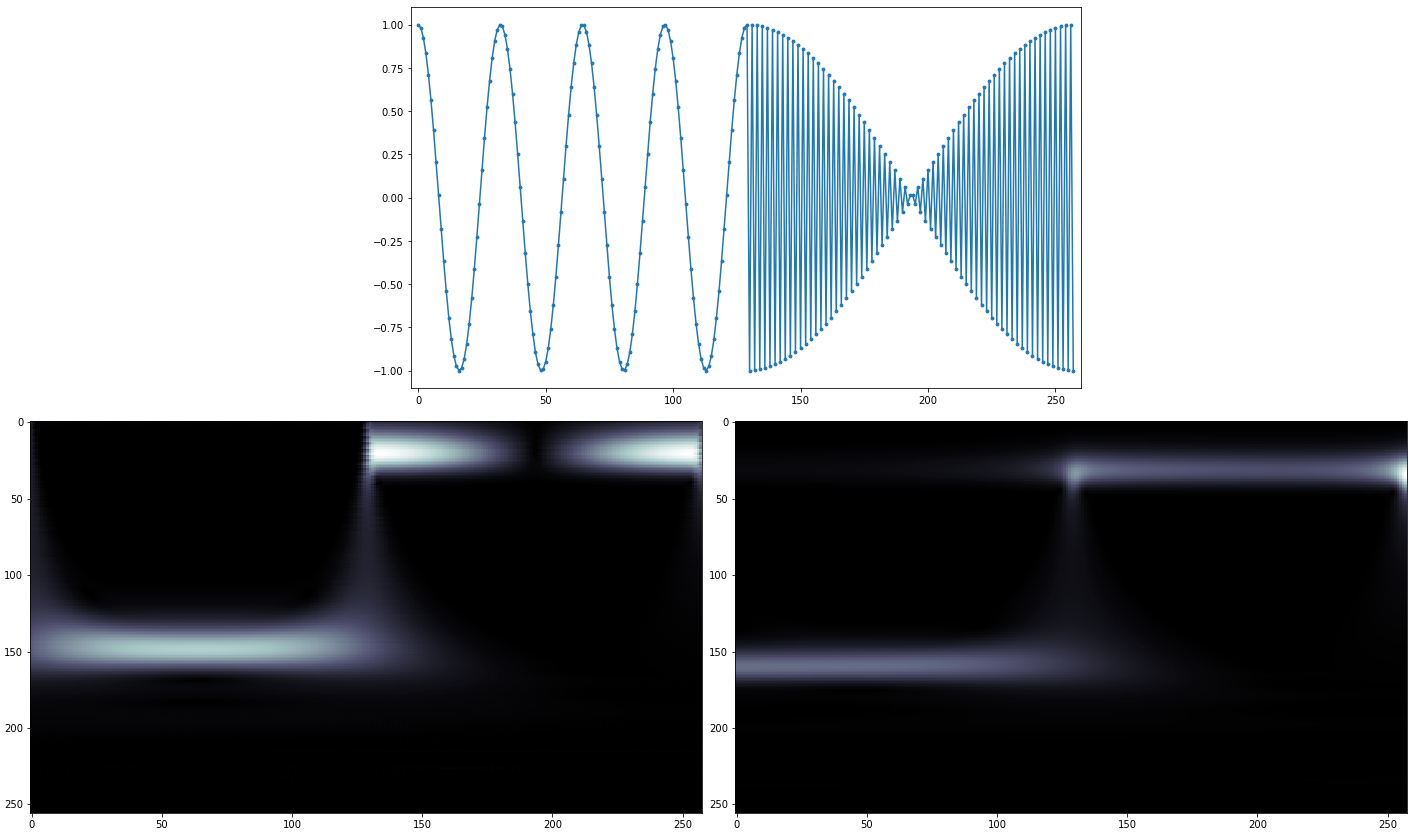 One clearly represents the right part's dip in amplitude, other doesn't. The waveform is two adjacent signals, $f=64, 1$, each with $N=129$ samples. So the actual, continuous / analog waveform is more accurately captured by one on the right. ... but how do I know this, in practice?

Of course if I know the data is Fourier-bandlimited, I can state with certainty that this is a 1Hz pure tone with an "imaging" effect, rather than an AM waveform. But I cannot possibly know that; Fourier frequencies aren't even 'actual' frequencies to begin with, as previously noted, so the only way to know if a signal is Fourier-bandlimited is to either have the source's mathematical function (good luck), or make a series of assumptions, apply filters, and be "sufficiently confident" the assumption holds.

What I can know is how bandlimited the physcal process is. For EEG, we're dealing with the brain, which we know to be capable of producing waves under a certain frequency (mostly <100Hz IIRC). If we strap on a device that samples at 10kHz, we'll undoubtedly get a DFT with nonzero normalized frequency components in thousands - which is absurd.

Thus we have a piece of information that's incompatible with a purely Fourier lens. If only we could avoid such 'artificial frequencies' by allowing amplitude to be represented independently... hello EMD.

Here's the truth: you either cannot tell me the physical process's, like one's this waveform may have emerged from, Fourier $f_\text{max}$, or it may cost you a lot to figure out. But you can tell me, from knowledge of the system, its physical, 'actual' $f_\text{max}$, which is precisely mathematically captured by decoupling frequency and amplitude representations as in EMD. If it's "EMD-bandlimited", it can very well be amplitude aliasing, and we can treat it accordingly.

What this means for responders & why it matters, in Meta.

Mathematical formulation of "bandlimited" wasn't the purpose of this question, but it's a valid inquiry of its own. Doubt I'll dedicate a Q&A to it so here briefly:

One must restrict what qualifies as "amplitude", $A(t)$, else it could be anything, including something that divides out whatever it modulates, making the definition useless. An intuitive restriction, aside continuity and differentiability, is $\mathcal{F}(A(t)) \ll \mathcal{F}e^{j\phi(t)}$ for

Then "bandlimited" would be defined over $\omega_k$:

Such construction is applied in Daubechies et al - page 538:

"Bandwidth" is defined over $\omega_k$ above - thus, so is bandlimited. A more rigorous formulation is given in this paper:

Further explorations and applications in Lilly & Olhede and much other literature.

Not the answer you're looking for? Browse other questions tagged sampling frequency aliasing or ask your own question.

0
Amplitude modulation vs sampling rate?
4
FFT of a AM modulated signal
2
Meaning of frequency and bandwidth of a signal, despite the fact that we do not know the signal
1
DFT coefficients meaning?
1
How does modulation frequency appear in the modulation spectra?

4
Does sampling in the frequency domain cause time-domain aliasing?
4
Determine maximum frequency of input signal to make system LTI
5
What's the impact of aliasing in the time domain?
8
Is sampling at double the desired reproduction frequency accurate?
0
Amplitude Response at greater than half the sampling frequency
0
does aliasing occur always if i sample a vibration in real world applications?
1
Frequency response and sampling theorem for triangular function
0
Amplitude modulation vs sampling rate?
0
GNURadio signal degradation *above* Nyquist rate