How is signal to noise ratio actually measured by receiver equipment?

This sounds like quite a basic question but it surprised me, how is SNR actually measured?

You have the incoming signal: 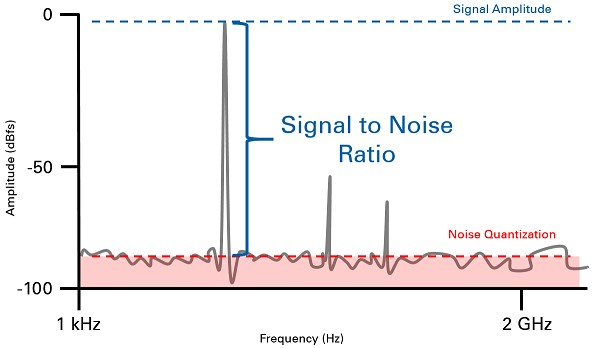 I'm assuming the received signal power would be calculated by squaring the $V_{RMS}$ of the samples taken and I assume noise is also sampled at a separate occasion to get the $N_{RMS}$ (or so called noise variance, but real noise doesn't have a 0 mean i.e. no 0 frequency component), or it uses a frequency spectrum analyser or something to get the voltseconds at unused frequencies and then integrate it with respect to frequency i.e. $s^{-1}$ to get the average voltage and then square it to get the average power, the problem with that being that you can't measure the noise on the frequencies that are used, so I would think that it is acquired separately, like in the wifi layer 1 preamble and training sequences.

The SNR is simply the mean-square of a demodulated symbol divided by the variance of the signal, or in dB:

A typical metric for this in receiver equipment is the Error Vector Magnitude (EVM) where an "error vector" is the Euclidean distance from the actual sample at the optimum timing location in each symbol to the actual symbol location in a reference waveform (as the distance to closest decision boundary, just prior to decision). EVM is the normalized rms of the error vectors over multiple samples, where the waveform and the decision boundaries are scaled to either the rms amplitude or a maximum amplitude in the constellation, depending on which standard is used. We can therefore use one sample for every symbol to compute a sufficient number of errors to derive a statistical quantity. 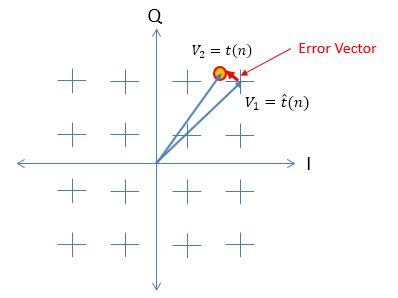 See this post for more details on computing EVM from which the above graphic was copied: How to calculate EVM in %age of an Equalized Constellation in 16QAM?, but to describe it simply we statistically estimate with enough samples the standard deviation of this normalized error. The EVM is the average of the noise magnitudes as a percentage of the normalized constellation which represents the signal. (The average of the magnitudes is not the same as the magnitude of the average ($\mu$) so an additional small adjustment factor for this is needed in translating EVM to SNR that depends on the signal constellation used and the normalization that was used for computing EVM).

The relationship between EVM and SNR is therefore:

This would be affected by the portion of the noise as in the OP's figure that is within the bandwidth of the receiver after demodulation just prior to symbol decision (which is the noise bandwidth we are concerned with: the waveform bandwidth).

Not the answer you're looking for? Browse other questions tagged fourier-transform digital-communications noise snr or ask your own question.

0
How to calculate EVM in %age of an Equalized Constellation in 16QAM?

9
How to estimate the signal-to-noise ratio of a waveform?
2
Signal-to-Noise Ratio (SNR) needed to discern two superimposed signals
0
Confusion about how to calculate signal to noise ratio(SNR)?
4
How to determine SNR from FFT of measured data?
2
MAD and RMS SNR relation
6
Sampling rate vs ADC noise tradeoff
3
Measuring microphone Signal to Noise ratio (SNR) with A-weighting
0
How to calculate SNR with sample noise and noisy signal only
2
Finding SNR for a portion complex signal