Low scales are arguably the most challenging to implement due to limitations in discretized representations. Detailed comparison here; the principal difference is in how the two handle wavelets at each scale:

(For pywt it's not exactly diff(int_psi), but key behavior is equivalent) Below plots compare real and complex morlet CWT's for a sharp transition signal; all coefficients were L1-normalized. 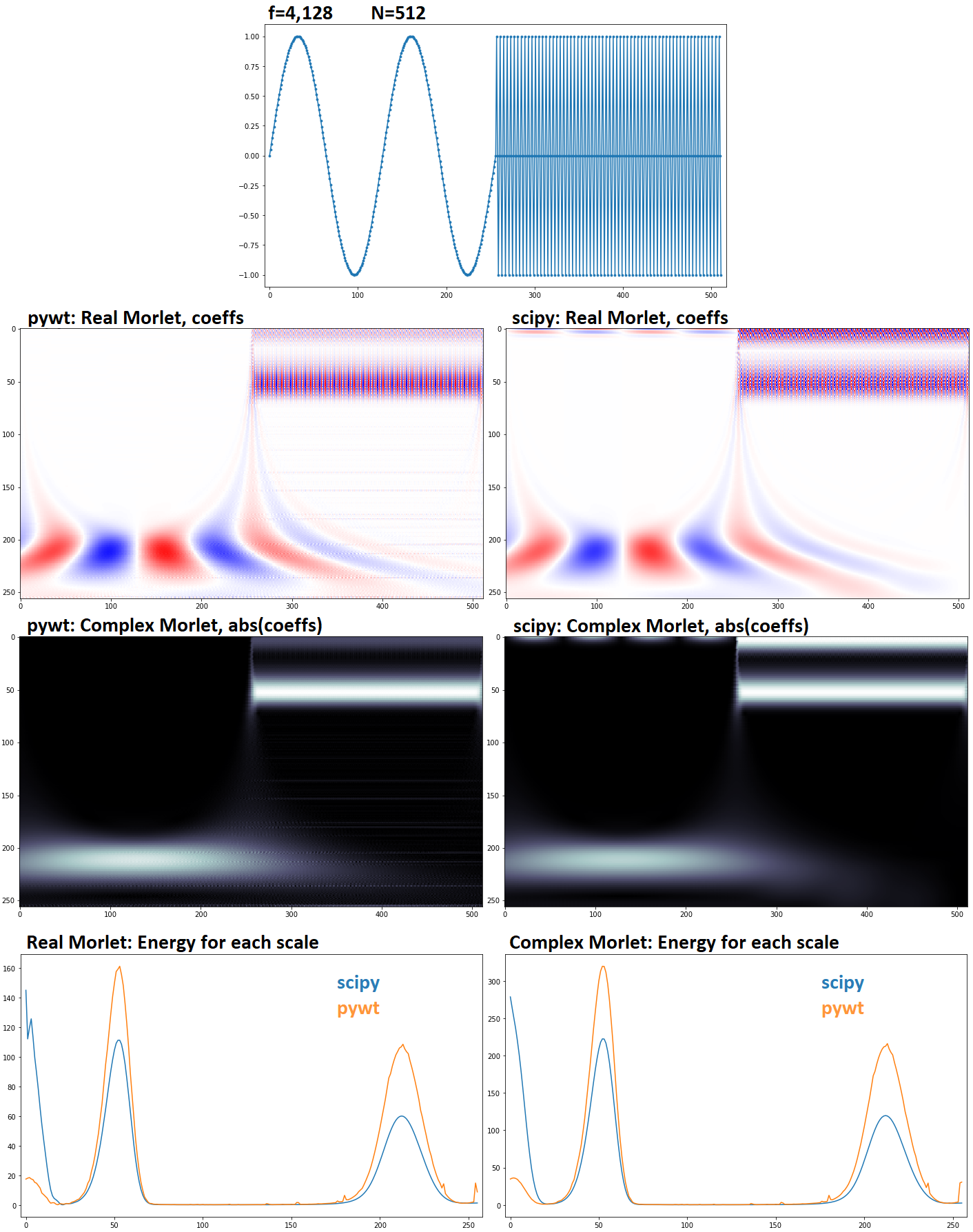 I didn't get much from inspecting shapes of respective wavelets (blue = recomputed, orange = resampled, both rescaled -1 to 1):

So what's the deal? Am I missing something in the discretization differences, or is pywt's integrated wavelet approach superior for lower scales (if so, why)?

I'm not exactly sure why scipy's direct recomputation is worse than pywt's resampling; I'd say resolution problem with very limited number of samples early on, and resampling integrated working out better (it's also slightly longer), but haven't investigated explicitly.

For additional assessment on low scales pywt vs scipy, see bottom section. The rest of the answer serves to justify the verdict, but doesn't add much further; the most informative is Fig. 2. Some code is provided, which can be reused to test other transforms.

A more naive kind of norm points to the answer; zero-mean + scale coeffs between $[-1,1]$ per scale: 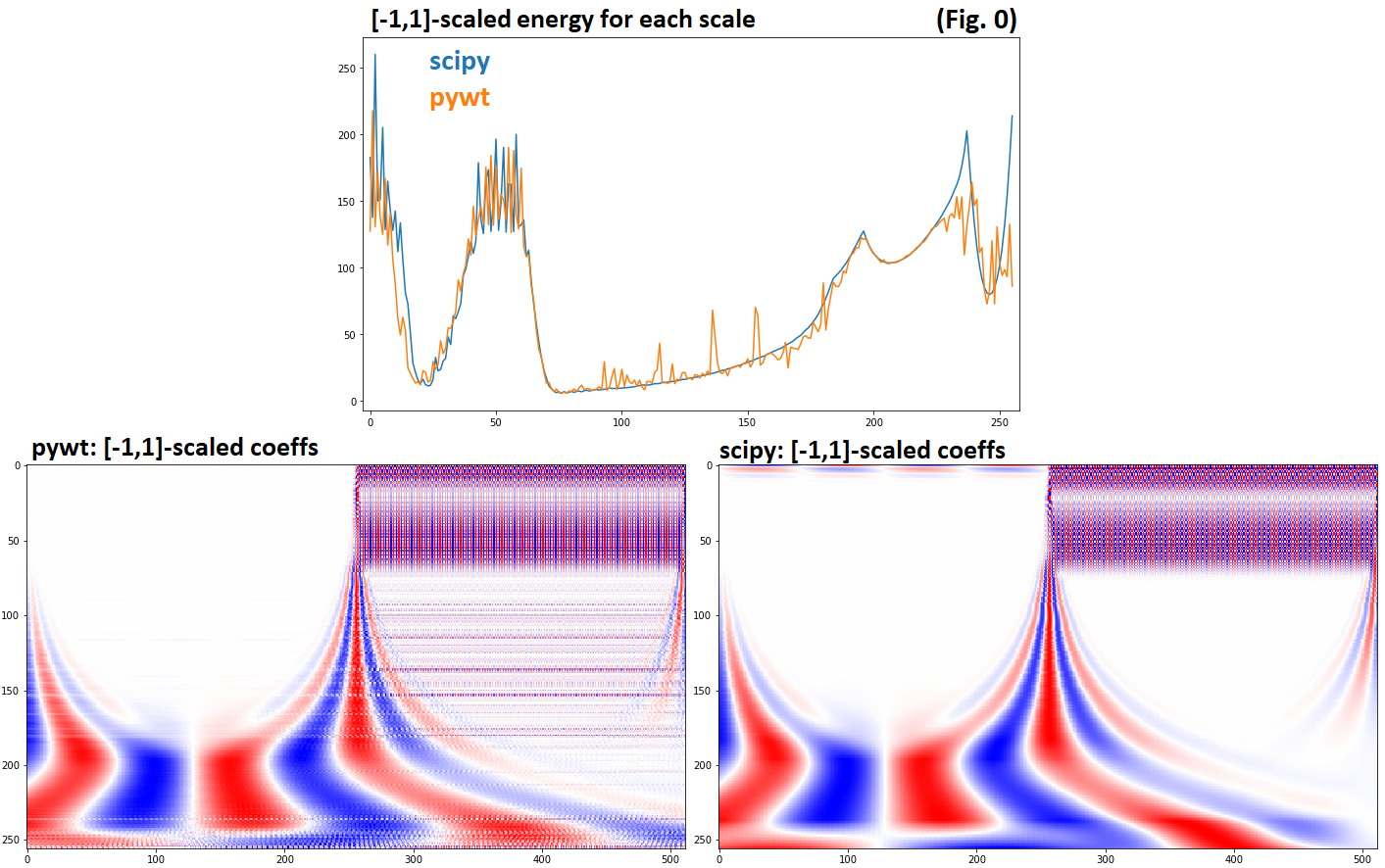 For the top plot, a $[0,1]$-rescale is equivalent, so it shows the normalized correlation strength with the wavelet irrespective of energy (actually not quite; caveat1). This suggests the difference to be rooted in wavelet amplitudes; let's compare. (-- coeffs code3)

Do they correlate differently? -- For all plots, blue = scipy, orange = pywt.

Timeshift-standardized: divide each timeshift vector by own maximum (highest absolute correlation among all scales). Plot absolute value of each scale vector, so timeshifts along horizontal. A greater value at a given timeshift indicates greater correlation of the plotted scale relative to all other scales at the timeshift.

Instead of looking at max amplitude, I define a measure of "mean amplitude": mean of absolute value of tail-trimmed wavelet, where "tail" = any absval 1e7 times less than peak amplitude (instead of strictly zero which is rarer). This is to unbias the mean for wavelets with long tails: (-- code2) 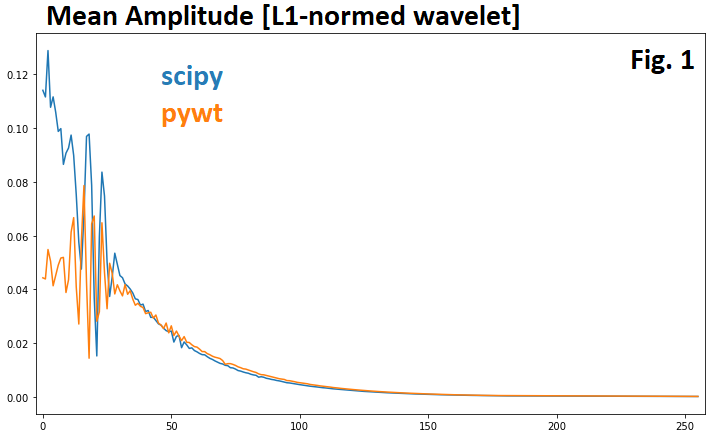 At scales[0], the ratio is 2.58 - when squaring for the energies, that's a x6.64 larger coefficient for scipy due to wavelet amplitudes difference alone. However, the ratio of coefficients' energies at that scale is 8.33, so there's another factor - and this factor is, surely, scipy's stronger correlation with low frequency part of the signal, as shown earlier.

To see how much exactly the amplitude accounts for, we can normalize by it; scale coefficients by ratio of (mean) amplitudes:

We see for most lower scales scipy's energies greater even with amplitude accounted for, leaving only correlation strength as the source of difference. Also interesting to see pywt correlate much more strongly at the first true mode (~scale 50).

Notice scipy jump above pywt at the right edge, yet, if we look at logscale mean amplitudes, pywt's is both greater, and correlates stronger as per the amplitude-normed plot. What's the deal? Recall how scale-standardized plot was defined; this is same, but now for coefficients - scale vectors are rescaled relative to themselves, rather than between pywt and scipy.

A greater value in Fig 0 results if most points aren't far below the maximum (as all points are divided by max) across timeshifts, or that the wavelet at the scale correlates more consistently for each timeshift. So it's more of a consistency measure; here's the last scale, shown for every timeshift: 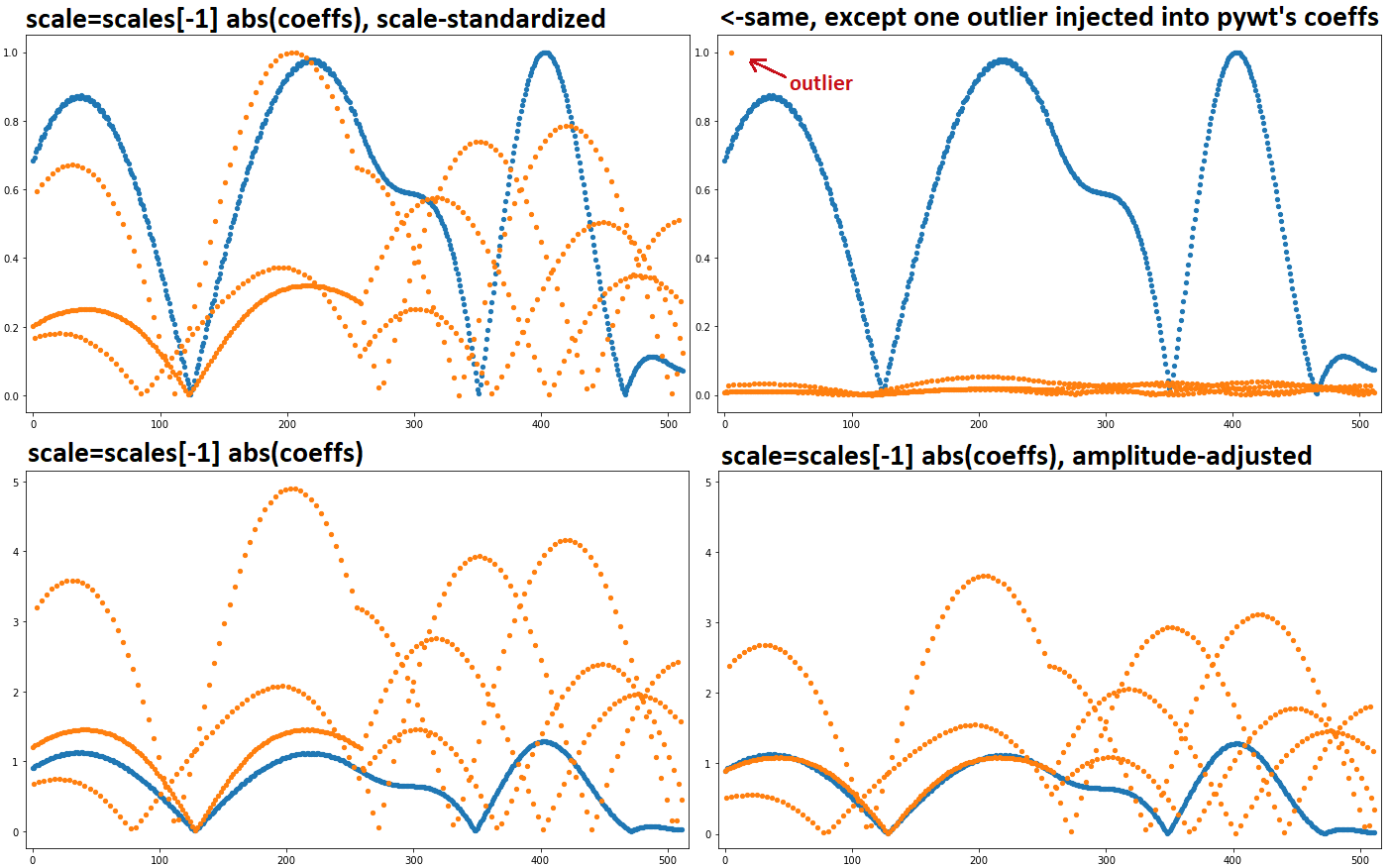 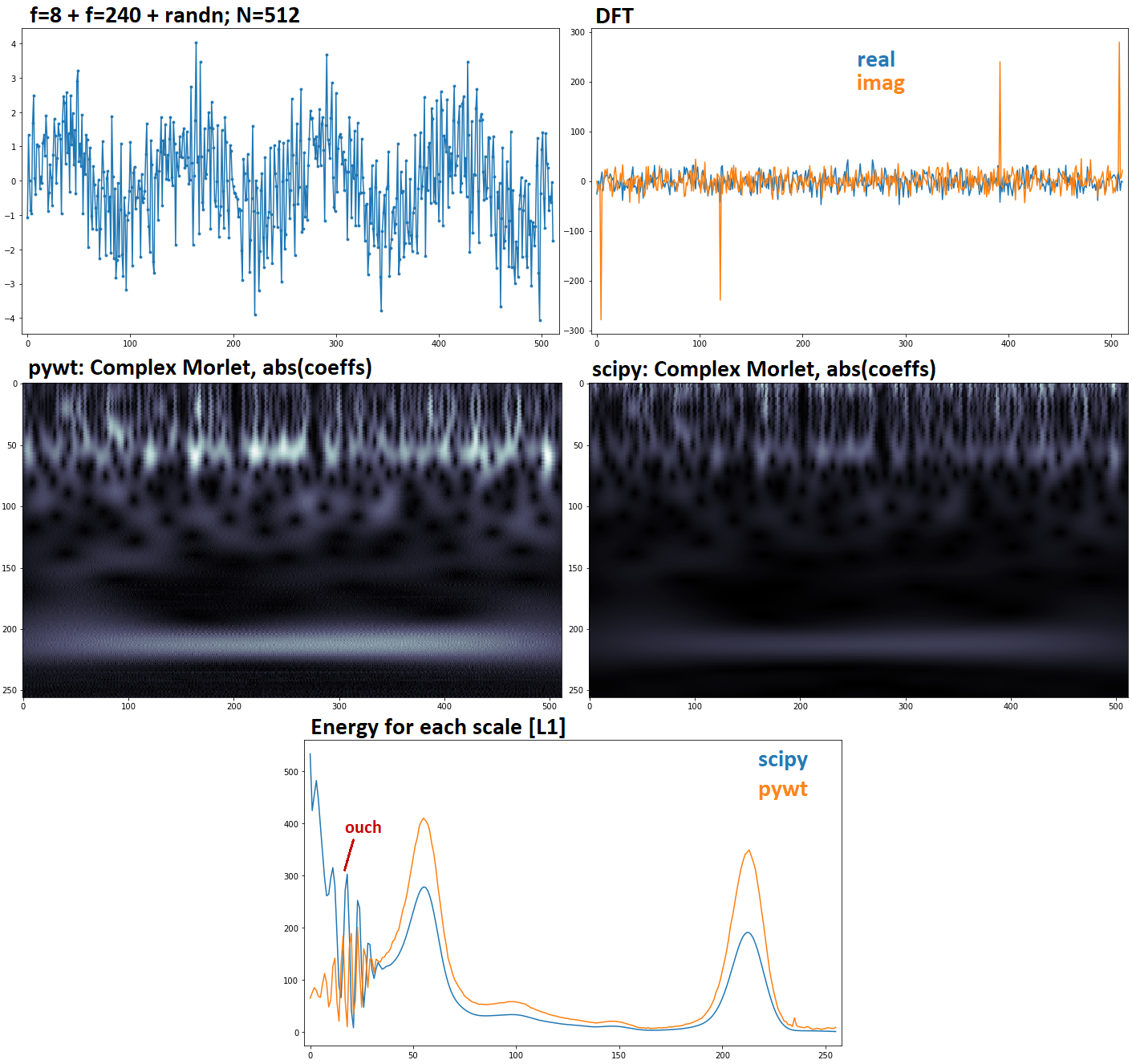 Not the answer you're looking for? Browse other questions tagged wavelet cross-correlation scipy cwt pywavelets or ask your own question.