I seek to understand PyWavelets' implementation of the Continuous Wavelet Transform, and how it compares to the more 'basic' version I've coded and provided here. In particular: 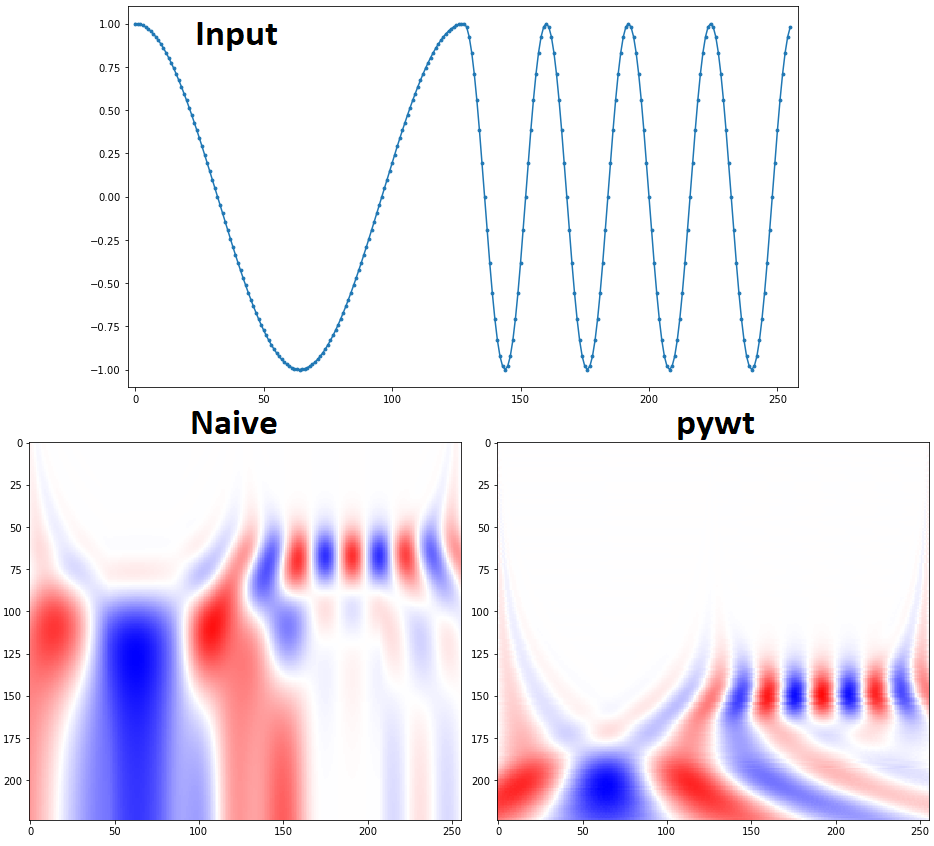 First see "Naive Breakdown" in a below section. Onto PyWavelets: the algorithm was found on Github to stem from an old MATLAB implementation, but it provides no details on coding the wavelet kernel. So I set on to explore; various visuals and code annotations here. Key findings follow. -- All code

See "PyWavelets Breakdown" below. It is implementing the following - namely Eq 4:

(1) How is integrated wavelet, then differenced post-convolving, equivalent to convolving without int+diff?

The formulation is in the right, deriving from the left, equations; Instead of continuously integrating over all $\mathcal{R}$, the integral is split into segments ssumming over $k$. The input is assumed constant over $[k, k+1]$ (though shouldn't it be $)$?), as it's discrete, whereas the wavelet is kept continuous. This enables to move the input outside the integral; visually:

So how do we code this? It's clear from Eq 4 that we need a diff somewhere. pywt does np.diff(conv), which is basically np.diff(coef); why does it seem to take difference of the would-be coefficient in Naive?

In Eq 4 we have the integrated wavelet up-to k + 1, minus up-to k, multiplied with the wavelet. This is equivalent to product with the wavelet at b - 1 and b, respectively (plug in t=k+1 and t=k, compare with plugging in b=b-1 and b=b instead`).

The answer's then in in conv; assume it was already trimmed so that it's only when the wavelet is at least halfway inside the signal. Then, every point in conv is the product of the wavelet with a portion of the input, at a different tau (or rather b). So two adjacent points in conv are products with wavelets at b and b + 1:

However, we seek minus between t=k+1 and t, or a greater t and lower t, which is the negative of above, thus explaining step 7 in PW Breakdown.

(2) How is resampling the integrated wavelet at increasing resolution equivalent to changing its scale?

See figure under (5) in PW Breakdown. pywt appears to "scale" via the number of samples that define the wavelet, rather than recomputing the wavelet with a dilated argument. ... though, visually, this resampling clearly does dilate the wavelet, stretching it relative to the input.

So it's indeed a form of scaling; but how does it compare to naive? Naive is recomputed more intuitively per equations, using fixed wavelet length, and passing a scaled argument. Then, which is better? The opposite question is clearer to answer; consider what happens at higher and lower scales:

The higher scale problems in both are solved by limiting the maximum scale; if both are in their completely safe zones, the Naive implementation seems preferable due to higher resolution. However, this "safe zone" for Naive is prohibitively small, if we are to consider "safe" as not jumping to zero at tails.

To contrary, pywt's problem is more easily solved by increasing maximum wavelet length, which was suggested to rid of the zipper-like artifacts (which can be seen in the question's plots). That'd, however, worsen higher-scale performance for short inputs - but in practice it's unlikely to be shorter than 1024. 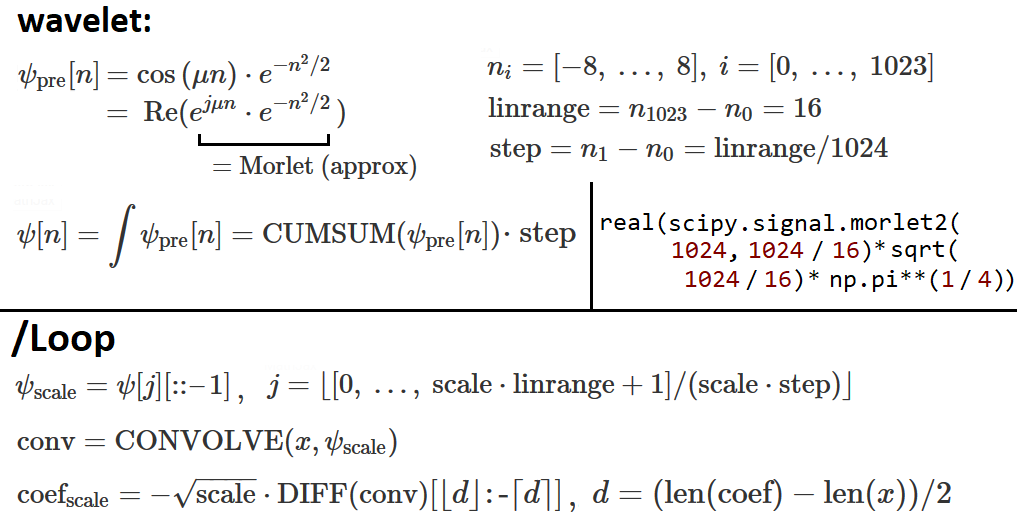 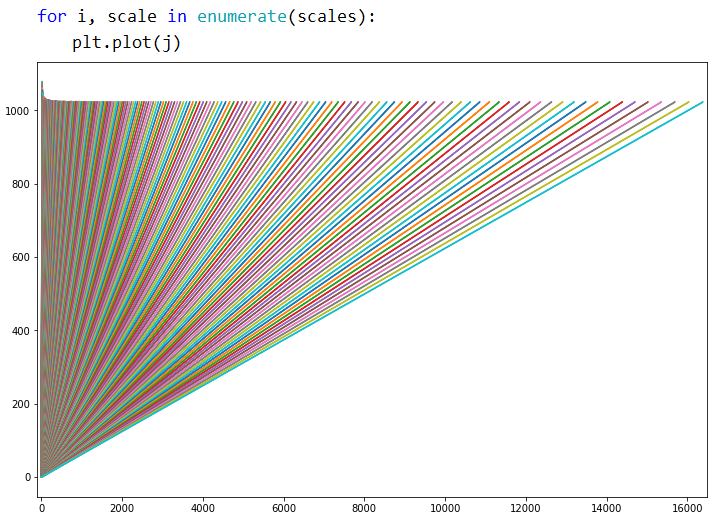 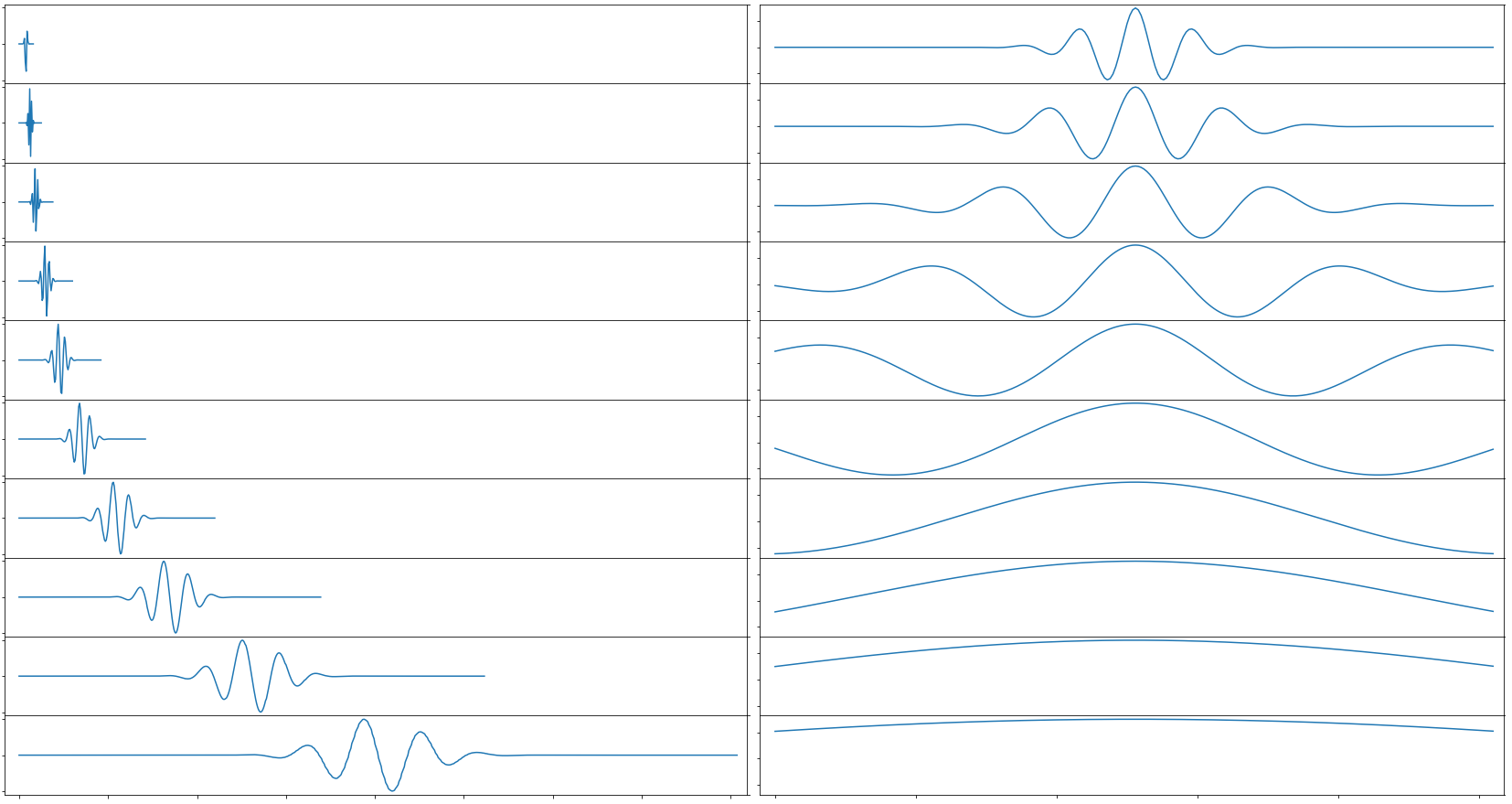 The difference between this and naive implementation in the question is, latter uses win_inc=1, equivalent to convolving with a flipped wavelet and trimming the result to only include parts where the wavelet was fully "inside the signal". Also, here we have tau ("increment") in the outer loop, there scale, but the two are equivalent.

Lastly, shapes along timeshift dim differ; question's implementation trims so that only parts of convolution where wavelet is at least halfway "inside the input" are included; this one trims further to where the full wavelet is included.

Not the answer you're looking for? Browse other questions tagged dft convolution wavelet cwt pywavelets or ask your own question.