Pre-Warping is not working on bilinear transform

New here and I just wanna ask the question of what happens when your pre warping doesnt work on your bilinear transform?

I am assuming my isnt working as part of my research I have read that the higher the frequency is the more non linear it becomes, so I am assuming that my frequency I chose just has to many non linearities that it wouldn't ever get re-aligned to the continuous function critical frequency. It tries but doesnt get there.

I noticed the closer you are critical frequency is to your Nyquist frequency when applying the bilinear transform it gets ugly. And it looks like the pre warping can only do so much.

The only way I see around this if I just changed my Sampling frequency to like 96kHz which would make my Nyquist frequency = 48kHz would be then the ratio = 42% this would ease the constraint of the non-linearities and have the pre warping affect work much better, but this raises the question is it possible to have a digital filter with a sampling frequency of 44.410kHz and a Fc = 20kHz? Because the way this is going I dont see it. 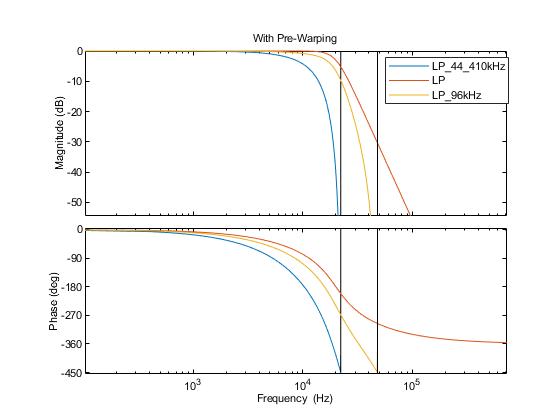 Regarding the prewarping, it gets significantly challenging to match the analog shape as we approach the Nyquist boundary since the bilinear transform warps infinity in s to z=-1 in z (Nyquist).

Prewarping implies the filter design is being mapped from s to z which wouldn't be my first choice for filter design unless I specifically needed to "copy the analog", which we should avoid given all the tools and capabilities today operating directly on the math of delay and multiplies rather than the limitation of analog components. The least squares algorithm is often my first go-to choice for standard FIR filter design with results as follows:

First the number of taps needed for an FIR solution is driven by the transition bandwidth (in contrast to the ratio of the cut-off relative to the sampling rate). So here for this application that ratio of concern would be $$\Delta f/(f_s) = f_\Delta = (22.205-20)/44.410 \approx 0.05$$ assuming our requirement is to achieve a rejection target by the Nyquist boundary. (Importantly, this is for the example of it specific to the OP's question but the bigger concern is the analog filter that would be required prior to the ADC-- the sampling ratio drives the requirements on that filter to reject aliasing that would not be resolvable digitally, so there may be motivation to increase the sampling rate to simplify that filter- more on this at the end).

Continuing... given this ratio we can use various "back of the napkin" estimators to determine the approximate number of taps neeeded to get 50 dB rejection (and importantly notice that it IS this ratio that drives that):

Let's see which is closer to meeting the mark using the least squares algorithm (firls in Octave/Matlab/Python scipy.signal): 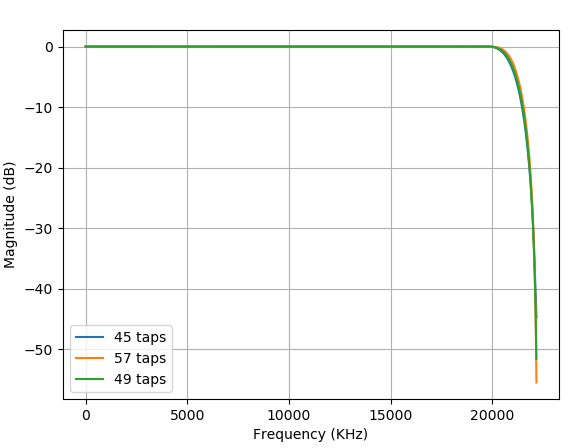 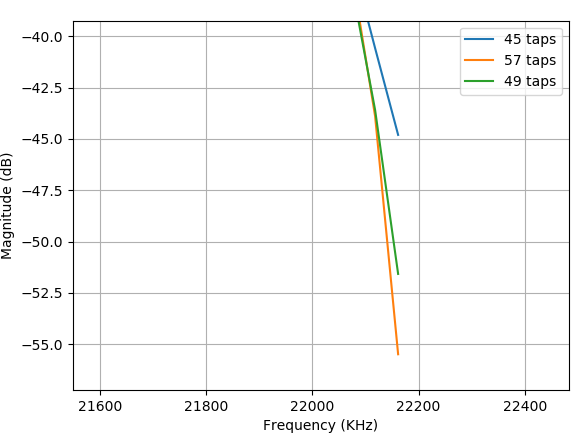 As the DSP variant Goldilocks and the three filters, in this case fred harris estimator is too little, Kaiser's is too much and as is typical these are estimators, starting points, from which we iterate to find the final solution which in this case was 49 taps (closest to fred). Note I used python scipy.signal.firls which requires the number of taps to be odd; which is why I implemented the Kaiser estimate with 57 taps instead of the estimated 58, and that 48 taps is likely the closest least squares solution given the targets provided. Also as we see by the estimators, doubling the sampling rate would have the advantage of cutting the number of filter coefficients required in half (or even much more depending on what the actual rejection needed) to achieve the same performance.

Finally again note since it is critical; such a sampling rate and desired passband implies (assuming this is the ADC sampling rate as well) an analog filter that would pass DC to 20 KHz with an anti-alias rejection requirement starting at $2 \times 22.205 - 20 = 24.41$ KHz. As for how this effects analog filter complexity and Q's required which ultimately limit this, this is a ratio of $4.41/22.205 \approx 0.2$ which is not overly challenging in the analog world but in simplest form may introduce group delay distortion that can be compensated for digitally. I am not really sure what the purpose of this filter is; if the analog filter is sufficient then this filter may actually not be doing anything. A typical approach is to relax the requirements on the analog filter to only reject the images and then do the detailed filtering digitally, which in this case would be achieved with a higher sampling rate.

is it possible to have a digital filter with a sampling frequency of 44.410kHz and a Fc = 20kHz? 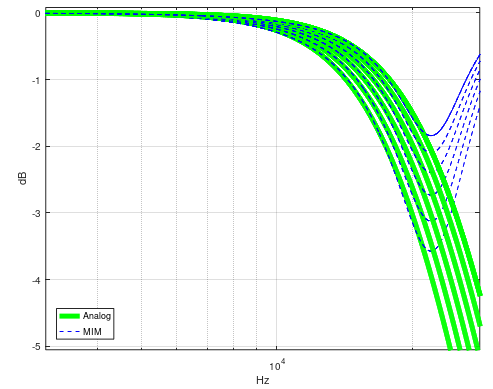 MIM method works well for even lower sample rate implementations but, there are also issues not sorted out yet.

Not the answer you're looking for? Browse other questions tagged filters filter-design lowpass-filter digital-filters butterworth or ask your own question.