Does Zero Padding Distort the Spectrum of a Signal?

It's said to "sample the DTFT", revealing what "DFT fails to see". And I fail to see how this sampling isn't distortion.

The "spectrum" aims to provide the sinusoidal frequencies comprising a signal. If we're getting a nonzero distribution from 1 to 63Hz for a pure 1Hz tone, that's by definition different.

Further, adding zeros changes the signal; who is to tell that these zeros didn't occur naturally as a part of it? If they did, the spectrum must look different - and it does. That it mathematically happens to be equivalent to sampling a related but different altogether transform is only a coincidence.

The problem appears rooted in viewing DFT as a 'special case' of the continuous Fourier Transform, and of its input as some signal with legitimate frequency contents. That's a fallacy.

The DFT is a standalone mathematical transformation which does not condition itself upon anything but the input being finitely long, and having finite values. It's an information encoding algorithm. It operates on any and all finite information - be it signals, Shakesperean sonnets, or a cup of water - as long as represented numerically.

DFT can be shown to be equivalent to solving $N$ simultaneous equations defining an $N$ long input; it's a complete, lossless transform.

What the spectrum "should be" is not what we get

See here. The input can be a pulse, or a single nonzero value and the rest zeros; there's nothing of periodic nature about either of these, nor do they need to stem from a physical source which is sinusoidal. The only truth is that the coefficients we find give us the sinusoids that sum to the input; with another transform, it can be triangle waves.

1: for a real-valued input. For complex, something similar may hold, but it's still a sum of bases (discussion here).

Both the forward and inverse transforms to acquire respective coefficients imply very different things for what the coefficients "mean". Under certain assumptions they can be treated equivalently, but not fundamentally.

This is clear from the inverse-transform perspective, or reconstruction; assume for now a rectangular-windowed DTFT:

Result? If you use one transform's coefficients in another transform, you get nonsense.

A generator is a complete descriptor - example: function, continuous. For describing a 1D signal, the signal is infinitely resolved; we can determine every possible intermediate value. From a generator we can get data, but not vice versa; even a truly continuous segment has infinite interpolations.

The DTFT (no windows) works with generators, not data. Its coefficients are described by a function (continuous), which are also determined by an operation between functions (one describing an infinitely long but discrete input, another the complex phasor at a continuous $\omega$).

The rectangular-windowed DTFT, on the other hand, works with both, but only "with permission" from generators - that is, the resulting spectrum happens to be the same whether we compute for $n=0$ to $N-1$ or $-\infty$ to $\infty$.

In contrast, the DFT works with data. No generators. But we can use generators if we wish - it's now the reverse case, generators "with permission" from data.

We can use this to interpret "treat DFT coeffs as DTFT coeffs". Suppose 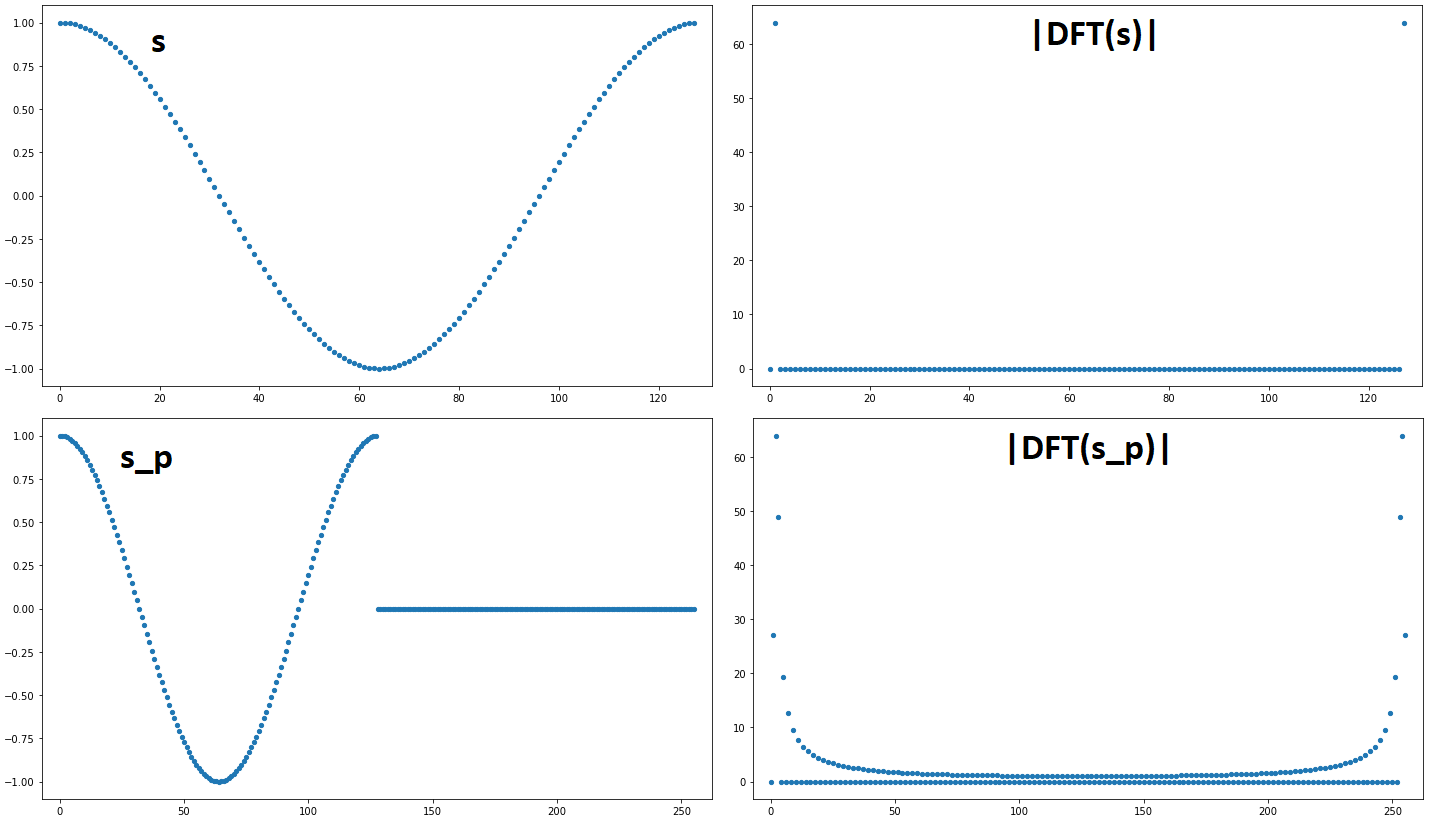 (Only real component of basis shown for clarity; can add the imaginary component for completeness)

Is there more evidence? Yes; first, see this. If above is true, then we can correlate the original signal with a $k=0.5$ basis directly, and yield the same coefficient as with $k_p=1$. And indeed:

Why one window for both padded and unpadded? ... because they look identical - check the code. Mean absolute difference: 6e-14 (within float).

In what sense do we "sample the DTFT"? What's the role of zero-padding?

Former should be clear now; the DTFT evaluates itself for every $\omega$. For any given $\omega$, this exactly the same as taking DFT with an equivalent $k$ basis. In other words, DTFT correlates with neighboring fractional frequencies, just like DFT correlates with integer frequencies. Simpler, "DTFT is DFT with $k$ spanning continuously" (but not quite; see caveats in above sections).

But why zero-padding? Why not one-padding, or pi-padding? Because it's the only way for an $M>N$-DFT with integer frequencies to be equivalent to an $M$-DFT with fractional frequencies$^1$. Refer to the blue/orange figure; note how the sum of products of the orange with the blue for $k_p=2$ is the same as for $k=1$ with the unpadded blue (not shown; just imagine). If the zeros were anything else, the values might have been proportional, or somehow similar, but not equal. In technical terms, zero is orthogonal to all basis functions over any interval.

Does zero-padding distort the spectrum?

The grand-prize. The answer to which is... yes and no:

So what's the deal? The deal is - DFT does NOT describe input's spectrum. This is the entire point of this answer, which was so warmly-received because of a technicality I was quick to retract with a NOTE: on top. Ignore the downvotes, they mean nothing without explanation.

Since it's not the spectrum we expect, it's meaningless to speak of a "distortion" as if it ever gave the actual spectrum. The input could be $f=1.1$, and then the unpadded DFT would be "distortion", and the only true spectrum would stem from incrementing the bases by $1.1$.

This also explains why we can't do much better than the DFT; we don't know what the "actual" frequency of a signal is without its generator (function). The DFT is simply our "best guess", one which must be interpreted carefully.

Possible to pad without distorting?

In other words, we can pad without losing the original spectrum.

Shorter version with more intuitive animation where original signal is fixed in frame, and alternate formulation: zero-padding extends the spectrum. 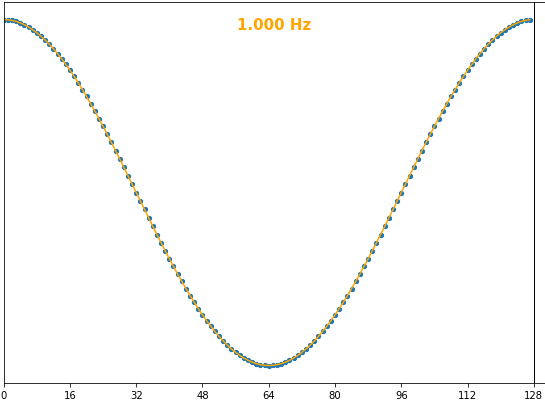 As we zero-pad the signal, this same k=1 basis now spans the total length of the padded signal, while adding values only from the unpadded signal, which is exactly the same as multiplying w/ a cosine of lower frequency in the original frame (details in my first answer).

Ignoring the padding part and thinking purely in terms of the modified cosine, this can be visualized as (try ignoring the right half entirely):

This is repeated with every other k, and we have more of k in total (as many as len(x) + pad_length). For example, if pad_length = len(x), then k=2 'becomes' 1Hz, and likewise any padding integer-multiple length of original signal will include the original spectrum entirely in the longer spectrum.

Thus, zero-padding can be interpreted as "extending" the spectrum, i.e. adding additional frequency correlates - atop original, or, if not integer-mult padded, shifting bins to fractions of unpadded (e.g. len(x)=128, pad_length=64, now k=2 in padded frame is k=2/1.5=1.33 in unpadded frame).

All windows distort spectrum, whether they be due to the inherent length of the DFT, or a zero-padding rectangle. That's because nothing of finite length (e.g. of finite support) consists of a single frequency in the frequency domain (or is even bounded in bandwidth). So you choose your preferred distortion (or window artifact).

One often preferred distortion is using a DFT length that is an exact integer multiple of one constituent sinusoid, which has the strange windowing artifact of being zero for all but one matrix transform basis vector. Or some linear combination of exact integer periodic sinusoids thereof.

Not the answer you're looking for? Browse other questions tagged fourier-transform frequency-spectrum dft dtft zero-padding or ask your own question.

12
A DFT “periodic inputs” question
4
How Do I Measure the Time Duration of a Finite Length Discrete Sequence?
2
Sequence expansion by zeros and interpolation - does it insert additional frequencies?
4
Why DFT is used for approximating CTFT when you can approximate CTFT-integral itself?
2
DFT coefficients meaning?
4
FFT of a AM modulated signal
3
FFT for long waveform
2
DFT of pure sinusoidal wave
3
PyWavelets CWT: normalization? Vs Scipy?
-4
Can digital filters actually separate signals?
See more linked questions