Why does DFT have only $N$ components?

This is by definition, as for example the DTFT is continuous in frequency given by

The reason for $N$ samples is also quite intuitive since as the OP saw the transform mathematically behaves the same way as if the time domain waveform was periodic: This is similar to the Fourier Series Expansion (FSE) which decomposes any single valued analytic function into an infinite series of discrete frequencies, with each frequency an integer multiple of the fundamental, with the fundamental given by $f=1/T$ Hz where $T$ is the duration in seconds of the time domain signal: That makes sense as the FSE also behaves as if that time domain waveform continued to infinity as a periodic waveform; if we repeat an arbitrary waveform over $T$ seconds, it will have a fundamental frequency at $1/T$ Hz. It also must be discrete, since each of the individual components given by the higher harmonics will also repeat only over duration $T$, and we recreate the waveform by summing each of these component (so any component that didn't repeat over $T$ would violate our ability to do that). 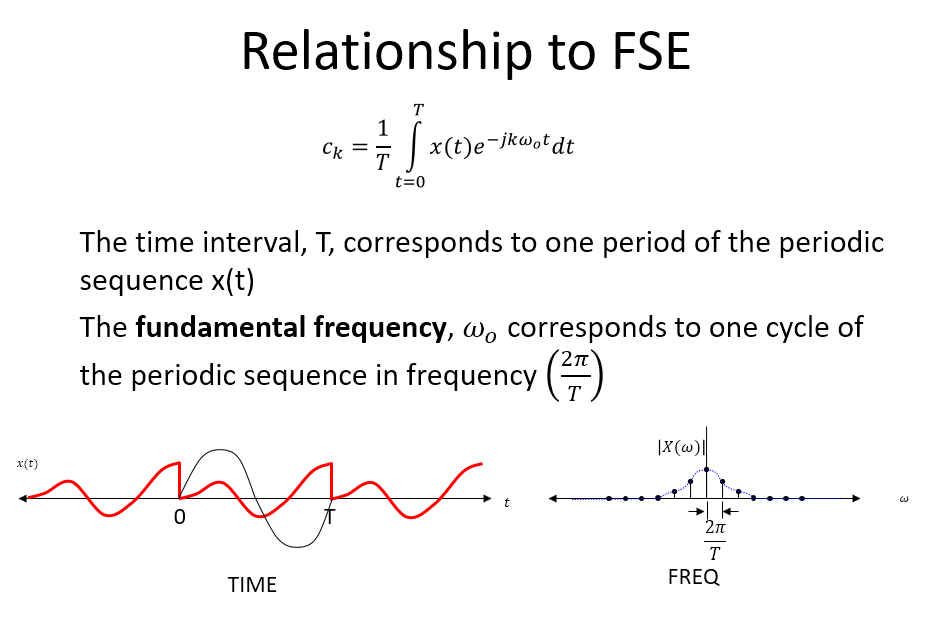 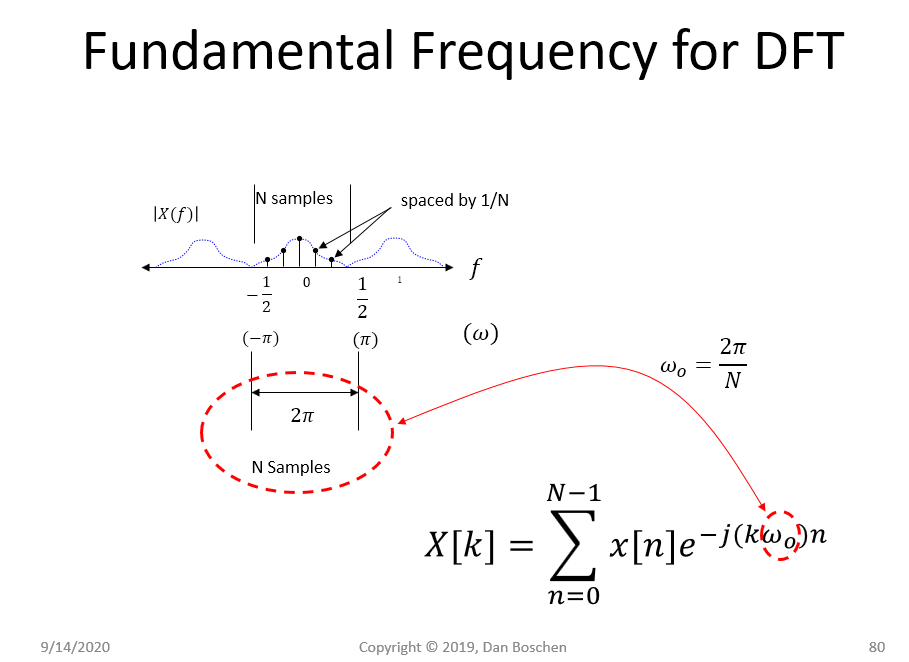 Why does the DFT have only N components in it ?

As you pointed out, the DFT could have an infinity of components in it, that repeat every N entries. To some extent, this is what aliasing is all about -- you're putting those "missing" bits back in.

There's two reasons (or perhaps one and a half) to limit the DFT to N components, though: One is economy -- you don't need more than N components. The other is completeness -- if you want to have a transform with an inverse, then having extra points in the forward direction makes for an indeterminate transformation in the reverse direction.

(Work this out for yourself -- first, because it's profound, and second, because I probably made some stupid typo in there somewhere).

It turns out that $\mathbf{A}_{DFT}$ is a square Hermitian orthoganal matrix, and just a scaling factor away from being orthonormal.

And that is why we stop at N points in our DFT: because each of the N points in the 'output' of a DFT is uniquely defined, and that N-point DFT carries all the information in the original vector $x$, without duplication. That, in turn, means that there's an inverse transformation -- that we can even find using linear algebra, if we're in a mood.

The definition establishes the calculation a single bin value from a range of sample values called a frame:

The DFT definition makes no assumptions about the values of the signal outside the frame.

$\quad n$ is the signal index

$\quad ?$ is the normalization factor (usually not shown, no conventional symbol)

The definition of the DFT can have variations based on the conventions used. The first is the normalization factor. The three predominant ones are:

$\quad ? = 1 $ This is the most conventional, and what you will find with most code libraries.

$\quad ? = 1/\sqrt{N} $ This is the Linear Algebra preferred one, as it makes the Matrix representation (TimWescott's answer) unitary.

Because of the nature of the exponential expression in the defintion, $X[k]$ will be $N$ periodic. Therefore a spectrum of N bins will contain all the obtainable information and extra calculations are redundant. (The answer being sought, I presume).

The value of $k$ represents the frequency of the corresponding basis vector in the signal space in units of cycles per frame. Because of the discrete nature of the signal, and how the underlying trigonometric functions work, values of $k$ larger than $N/2$, or smaller than $-N/2$ (known as the Nyquist bin for even $N$ values) are indistinguishable from values within this range and are known as alias frequencies.

It is common to evaluate the DFT for bins 0 through $N-1$, usually done when the input range is also 0 through $N-1$. The second most common, is to evaluate the range from $-M$ to $M$ in the case of the corresponding input range. There is nothing that says you have to compute any or all the bins. The periodicity makes conversion between different choices easy without requiring recalculation.

The inverse DFT is mathematically equivalent to the forward one without the negative sign in the exponent. The normalization factor should be chosen so that the product of the two normalization factors is $1/N$. This is not a requirement and many code libraries will provide an unnormalized IDFT.

Whether the negative sign is in the forward transform or the inverse is relevant for complex tones, as it is desired the a signal which is a pure complex tone of frequency $k$ cycles per frame should be represented by bin $k$ in the spectrum. Since a real pure tone is an average of two complex pure tones with equal magnitude, but opposite sign, frequencies, it will be represented in bin $k$ and bin $-k=N-k$ regardless of the sign.

Like the forward DFT, the inverse DFT is periodic in its output. Thus, if you take the inverse of the spectrum of a signal, the signal you generate is a new signal which matches the original signal exactly in the frame and is N periodic outside of it.

The "ideal use" of a DFT is to frame a periodic signal on a whole number of cycles. In this case, the inverse of the spectrum and the signal match inside and outside the frame. Since a periodic signal can always be represented as the weighted sum of a set of harmonic tones, and harmonic tones have frequencies that are whole integer multiples of the fundamental, the values of the weights can be determined directly from bin values.

The N periodicity of the output is trivial to prove straight from the definition:

This can be shown directly from Euler's formula:

Note, this answer does not have any dependency to the corresponding continuous case, or even presumes its existence.

The animated gif is even cooler, but way too large to post.

Not the answer you're looking for? Browse other questions tagged dft fourier or ask your own question.

4
Why do we have to rearrange a vector and shift the zero point to the first index, in preparation for an FFT?
0
What is the point of smoothing an FFT or spectral density plot, and how does that affect the noise floor?

2
Calculate harmonics using DFT from real points
14
Why Does the DFT Assume the Transformed Signal Is Periodic?
3
DFT vs FFT: does odd number works for DFT only?
1
DFT have independent variable in between 0 to $\frac{1}{2}$ no of samples
0
Maths behind why removing values from DFT is not a brick wall filter
1
Does the DFT calculate spectral components up to half the sampling frequency, $f_s/2$?
1
Why can we have non-integer frequency bins in FFT?