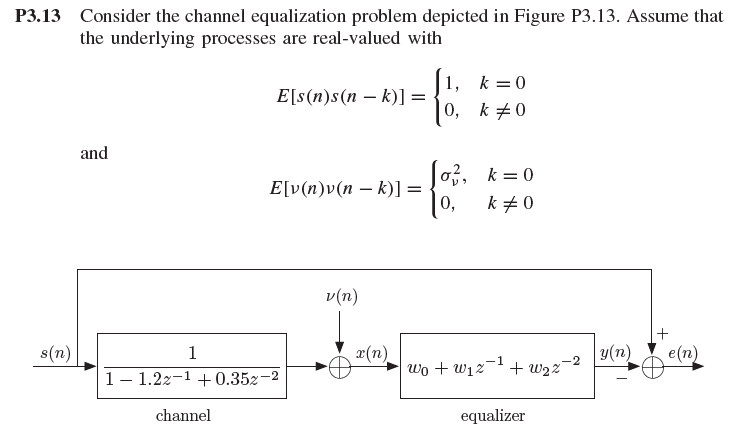 My process to solving this problem was first by decomposing the channel block using partial fractions. As in the following:

This appears to be a homework problem so I will avoid providing the complete solution here, but the following should suggest a path toward a solution:

Typically this problem is done when the channel is NOT known and results in a least squared approach given the effects of the added noise $v(n)$. Solving for the equalizer coefficients when the channel is a known quantity results in a similar process to solving for inverse convolution using a matrix equation approach as is linked here: Compensating Loudspeaker frequency response in an audio signal with a convolution equation of the form:

Where $h[n]$ represents the non-causal channel response and $w[n]$ represents the non-causal equalizer coefficients. I use "non-causal" to mean each is centered about $n=0$ which simplifies the equation to remove any delay in the result, as in $\delta[0]$ vs $\delta[n-m]$. The result in turn for the causal solution simply changes the indexing back such that the first sample starts at $n=0$ rather than the middle sample.

This would result in $y[n] = s[n]$ when the noise is not added, and since the noise is white, this would also be the solution that any least squares approach using actual signals $s[n]$ and $x[n]$ would converge to. As constructed I do not see this as a least squares problem but simply an inverse convolution problem. This is similar to the use of least-squares versus zero-forcing equalizers and has similar construction: the least-squares solution converges to the zero-forcing solution as SNR increases.

In this case we solve for $w[n]$ using inverse convolution.

Not the answer you're looking for? Browse other questions tagged convolution adaptive-filters equalization wiener-filter or ask your own question.

3
Interpreting FFT Coefficients from System Matrix That Is Originally Toeplitz (Not Circulant)
6
Deconvolution (Linear Convolution) with an Under Determined System of Equations?
4
Adaptive equalizer for IIR channel?
1
Why Is the Result of the Convolution of a Row and a Column a Two Dimensional Matrix?
1
Matched filter - do I need to know the signal I am trying to find?
1
Finding the Correlation Matrix of Wiener Filter using MATLAB