I have already asked (in another thread) how to quantify (specify) the window function I have created. One figure I need it seems is the Equivalent Noise Bandwidth (ENBW) Or Noise Equivalent Bandwidth. I now need some practical help. How would I go about determining the ENBW of my window function? I guess I am asking, what signal I should apply and what should I measure to generate some numbers from which I can then calculate the ENBW? Having read around the subject, I have not found a very straightforward explanation of what to do. Apologies for being really dense, mathematics is tough for me because of my form of dyslexia. Thanks.

This first image shows my window (black trace) for which I would like to calculate the ENBW. This is shown versus Blackman Harris (green trace) window for reference. This test emulates a perfect (synthesised) 1kHz sine wave sampled at 48kHz with 32-bit precision and 1Hz bin-width. 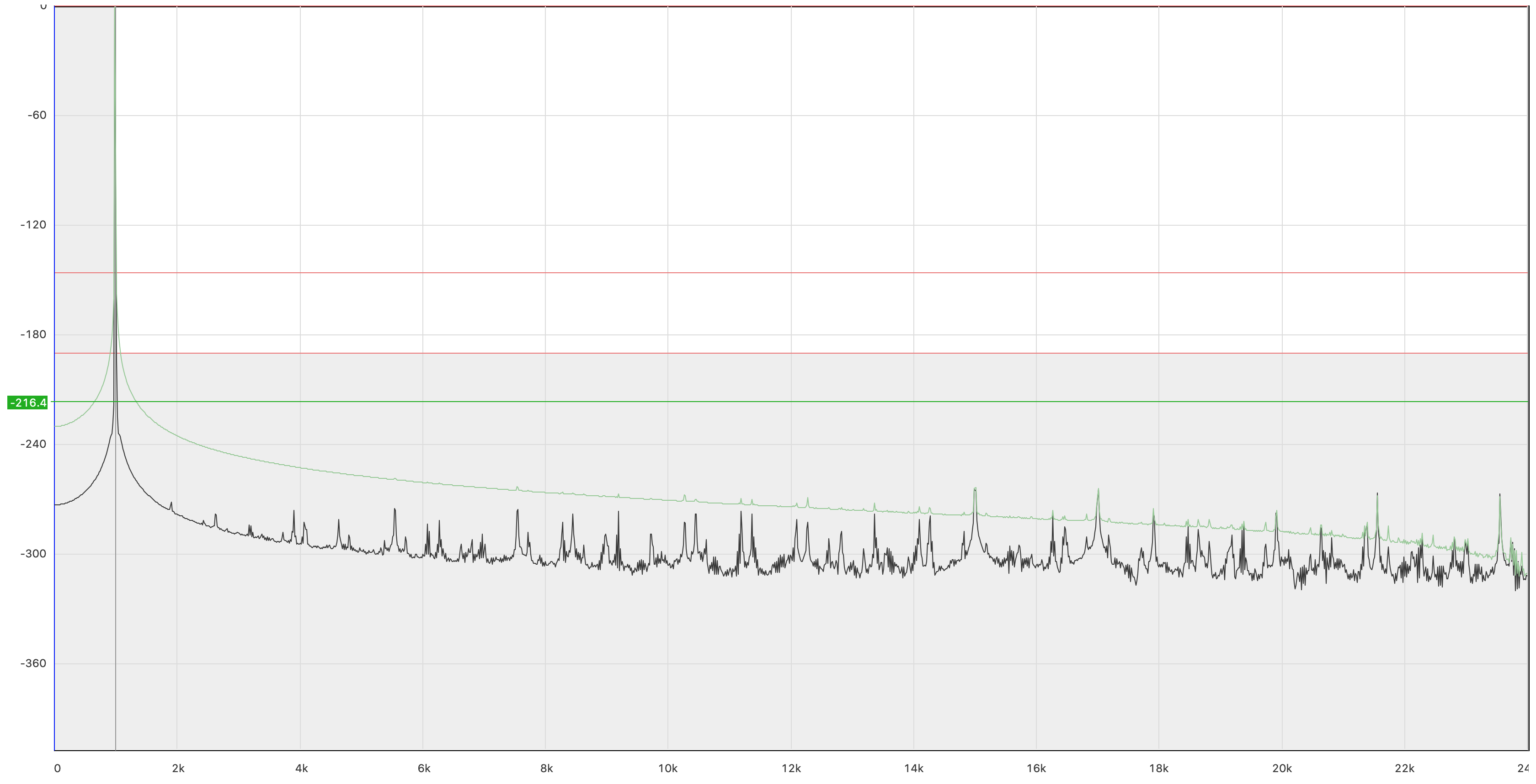 This second image shows my window again (black trace) versus a Blackman Harris again (green trace) only with an attempt to emulate a realistic situation. The synthetic sine wave is now 1000.5Hz (so 47.976 wavelengths fit in one sampled block) and a noise floor has been added. This shows how my window allows the noise floor (and second tone - see below) to be viewed in detail while it is obscured by the Blackman Harris window. Also, a second sine wave of 1050.5Hz and -160dB has been added to demonstrate the point of the improved window - to better separate components that are close in frequency. Please note that levels are all over the place because of a lack of calibration rather than level errors in the window itself. 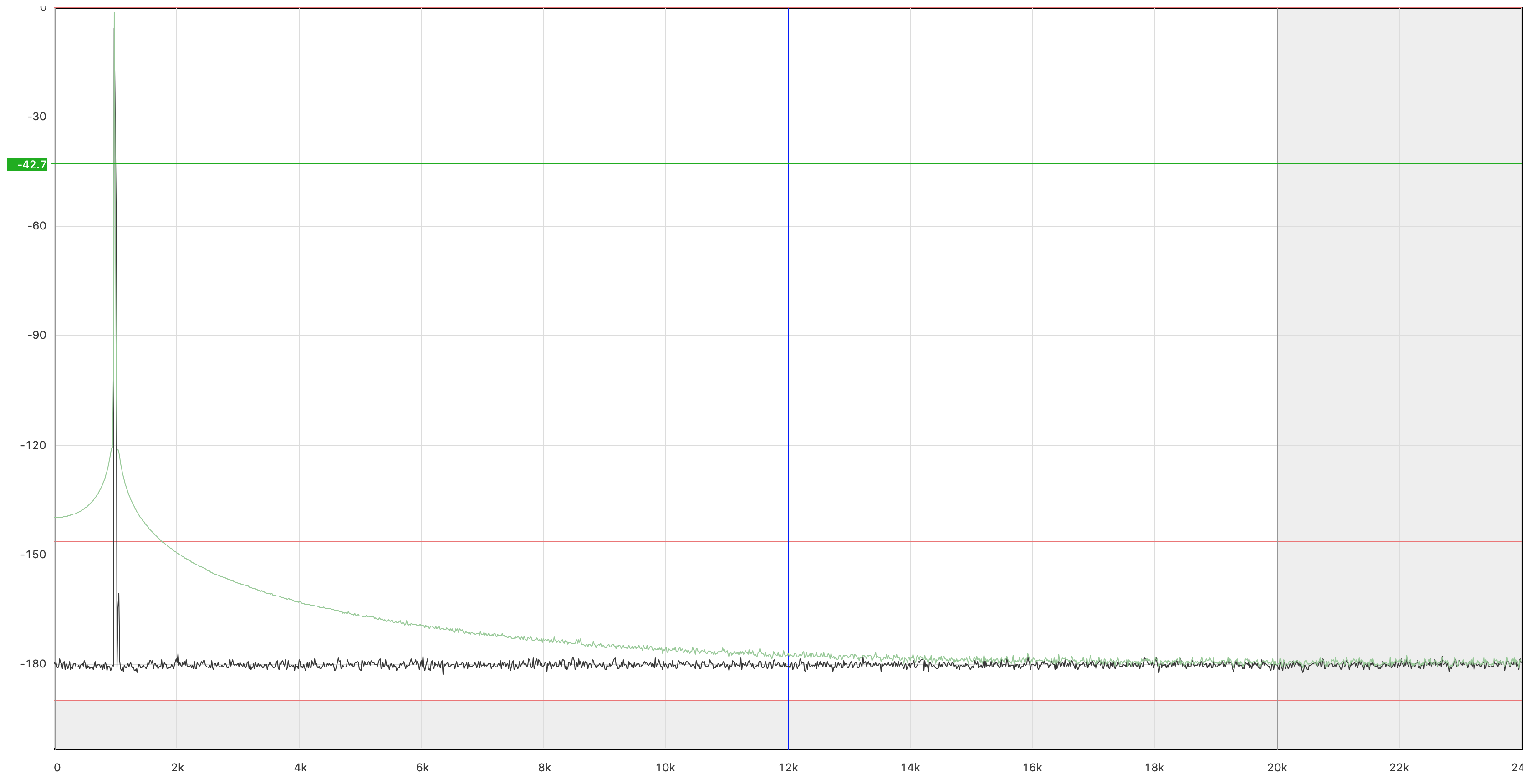 The equivalent noise bandwidth (ENBW) for a window function is the bandwidth in bins of a brickwall filter that would result in the same noise power from a white noise source as the DFT "filter" (when viewing, appropriately, each bin of the DFT as a bandpass filter). The ENBW for the rectangular window (no further windowing) is 1 bin as demonstrated in the first plot below. The ENBW for any window can be determined from the following equation:

Where ENBW is Equivalent Noise Bandwidth (in bins), and $w[n]$ is the window samples. 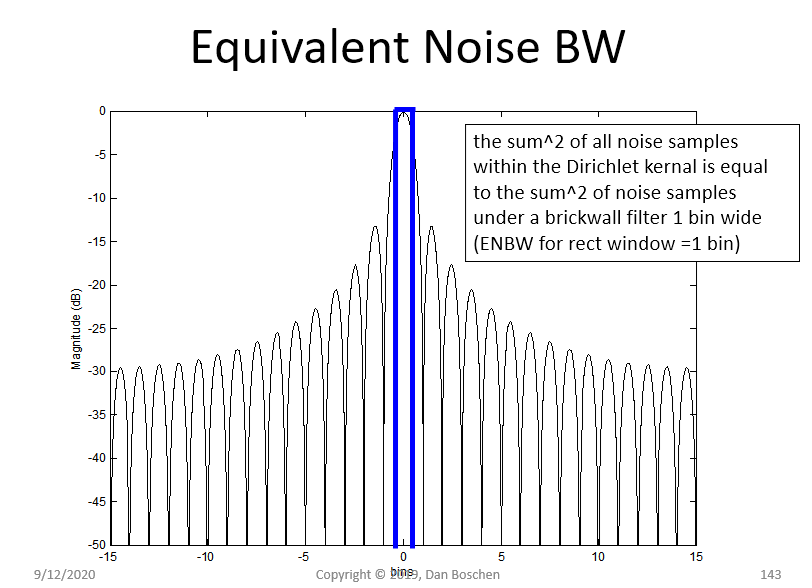 The ENBW is a useful metric for window comparison and an indication of the resolution bandwidth of the window.

The ENBW is derived from the processing gain (also called windowing loss) which is the change in signal-to-noise ratio (SNR) due to the effects of windowing (always negative compared to the rectangular window which has no loss).

The processing gain of the window is related to the ENBW as follows:

This makes perfect sense intuitively: if the ENBW was 2 bins, then we would overestimate the total noise power by a factor of 2 (+3 dB more noise) when we sum the noise power in each bin, while the “signal” power if it only occupied one bin would not be modified relative to the noise thus resulting in a 3 dB degradation in SNR. This is detailed further below.

The processing gain is specifically due to the difference between the coherent gain that applies to the signal (when it occupies only one bin) to the non-coherent gain for the noise, from which we can derive the formula for ENBW as follows:

The coherent gain of the window, meaning the gain that would occur if all the samples of the windowed signal were in phase, would simply be the direct summation of the window, normalized by the number of samples, as follows:

The result of this, which provides further intuition on "coherent gain" is given in the plot below. 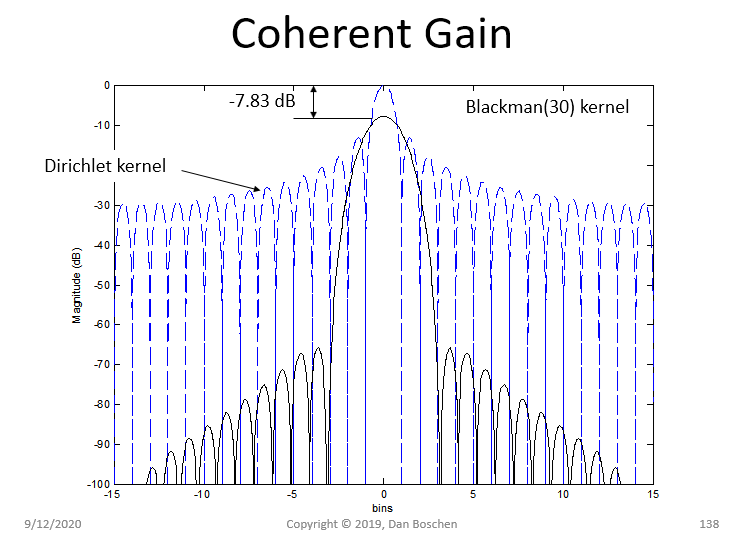 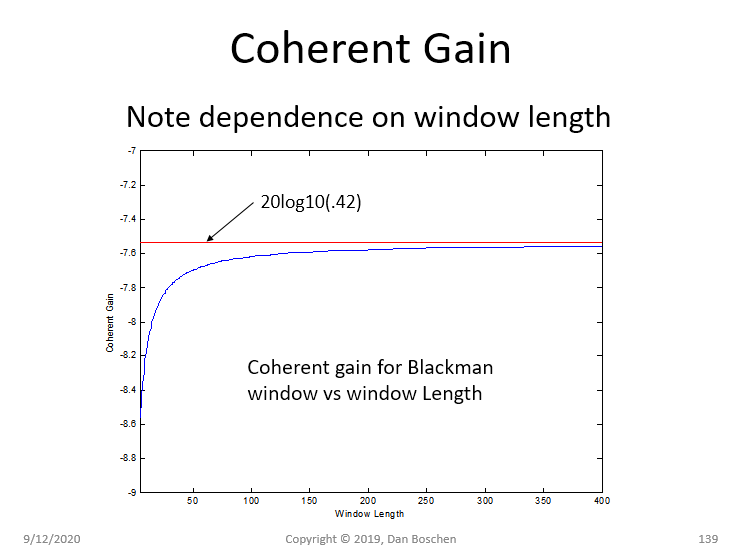 So we see that noise and signal components will change differently due to windowing and the ratio of this difference is the Windowing Loss, also called the "Processing Gain" as defined earlier and here given as:

What may be confusing at first is how bins related to correlated signals can have a different power result than bins related to noise components after windowing, resulting in the change in SNR. This is explained intuitively by the ENBW: Each bin is reporting the power in its own bin plus some or all of the adjacent bins due to the spectral widening from the window. Thus in the case of white noise where all the bins are at or close to the same power level, when you sum all the bins you will over-report that actual power since power in adjacent bins is getting double-counted. In the case of a single tone (with no other tones present), it's power occupies one bin so can't get double counted (but would of course effect multiple tones due to the spectral leakage). Without windowing (meaning using a rectangular window), the ENBW is 1 bin, so for noise the power sum of all the bins would be equal to the total power which is consistent with Parseval's theorem. This is NOT the case after windowing as explained above. We also see from this that the SNR for a waveform that itself occupies several DFT bins would also be affected differently as the waveform would thereby approach the result we get with noise, meaning reduced windowing loss since the signal and the noise would approach being affected equally.

ENBW and PG are useful metrics when comparing window functions.

Update: I just saw this related article posted on Linked-In, I only read it over quickly but appears to be much more detailed and relevant to this post so will link here: https://www.gaussianwaves.com/2020/09/equivalent-noise-bandwidth-enbw-of-window-functions/

So to calculate the ENBW, you integrate the filter's amplitude response squared, from frequency = zero to infinity.

I'm not sure what the best accepted method would be do to this physically, but I suspect that if you apply white noise of known spectral density to the input and then measure the average output power, you can easily calculate the ENBW as noise power divided by spectral density.

8
Intuition for sidelobes in FFT
7
Proof that the rectangular window has the best resolution
4
Is spectral density sometimes normalized by sampling rate rather than bin size?
0
about PSD scailing factor
0
Distortion in phase difference measurement using FFT
1
how to improve the noise estimation in PSD for non-coherent sampled data?
1
Calculate power of sinusoids with FFT
0
How to reprocess SDR data to be equal to that captured with a higher RBW
1
Does the duration of a signal affect its frequency component's amplitude? Also, does the sampling frequency affect the power of a signal?
0
problem with FFT in PYTHON
See more linked questions