I am trying to figure out how to consider digital-to-analog conversion and how to consider oversampling based on a course I am taking online and figuring out the logic behind this. Unfortunately there is very little on this topic in the textbook, and I am not sure where to start.

Consider a D/A converter for audio signals consisting of a zero-order-hold interpolator followed by a continuous-time lowpass filter with positive passband between $0$ and $20 KHz$ and stopband starting at $f_a=40 KHz $.

Assume we want to convert a digital signal originally sampled at $16 KHz$. What is the minimum oversampling factor that we need to use?

I am somewhat stuck on how the passband frequencies as well as the digital sampling frequency is affected when going D/A vs. A/D. What would be the approach to think about this? I am aware of Nyquist frequency, but since the direction of digital-to-analog is not completely analogous (excuse the pun) to the analog-to-digital when thinking about oversampling, I am not sure what to do here.

The short answer is for any digital signal the frequency spectrum is periodic, repeating at multiples of the sampling rate. The D/A output is the periodic spectrum shaped by a Sinc response due to the staircase (zero-order hold) reconstruction, with the first null of the Sinc at the sampling rate. The intention of the continuous-time lowpass filter is to remove these copies of the spectrum that would otherwise be a source of distortion. If the signal was originally sampled at 16 KHz, then there will be copies of the audio spectrum at every 16 KHz. If the DAC output has a filter that extends to 20 KHz, and starts to reject at 40 KHz, we can assume the analog spectrum is less than 8 KHz at baseband (due to the 16 KHz sampling rate), and from that after reading the details below it should be clear as to what the minimum sampling rate needs to be to ensure all higher frequency replications of the spectrum are greater than the 40 KHz cutoff of the low pass filter. This implies a digital resampling to a higher rate (with its own filtering of those same images) would be required prior the DAC is required.

The OP's understanding of the A/D process would apply here, with the additional effect of the zero-order hold. Let me explain each in turn, starting with the Analog to Digital (A/D) and then going from Digital to Analog (D/A).

The digital spectrum is periodic in frequency. Whatever is in the first Nyquist zone that extends from $-f_s/2$ to $+f_s/2$ (with $f_s$ being the sampling rate) would replicate in every other Nyquist zone, as detailed in the diagrams below showing the sampling spectrums going from analog to digital for both real and complex signals. The periodicity can be explained as follows: The sampling process is the product of an impulse stream in time with an analog time domain signal. The Fourier Transform of a stream of impulses in time (repeated impulses at the sampling period) is a stream of impulses in frequency as given by the middle "Sampling Process" spectrums in the plots below, with an impulse appearing at multiplies of the sampling rate. Multiplication in time is convolution in frequency, so the Sampling Process Spectrum convolves with the analog Input Spectrum and thereby replicating it at every multiple of the sampling rate. 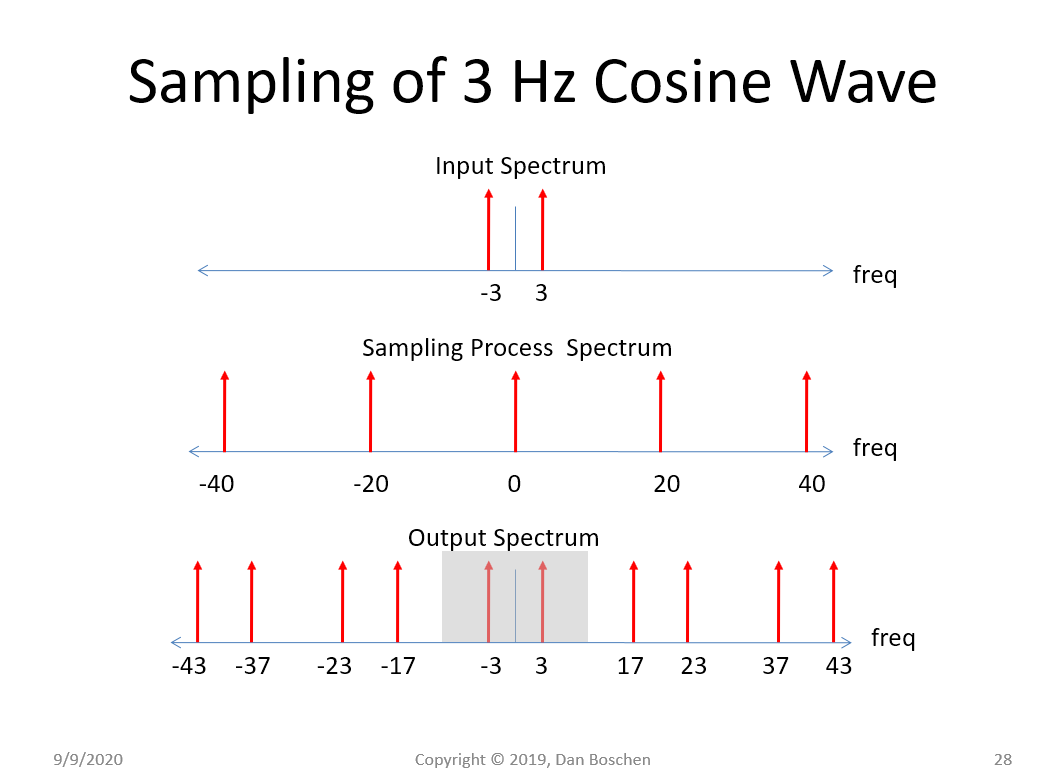 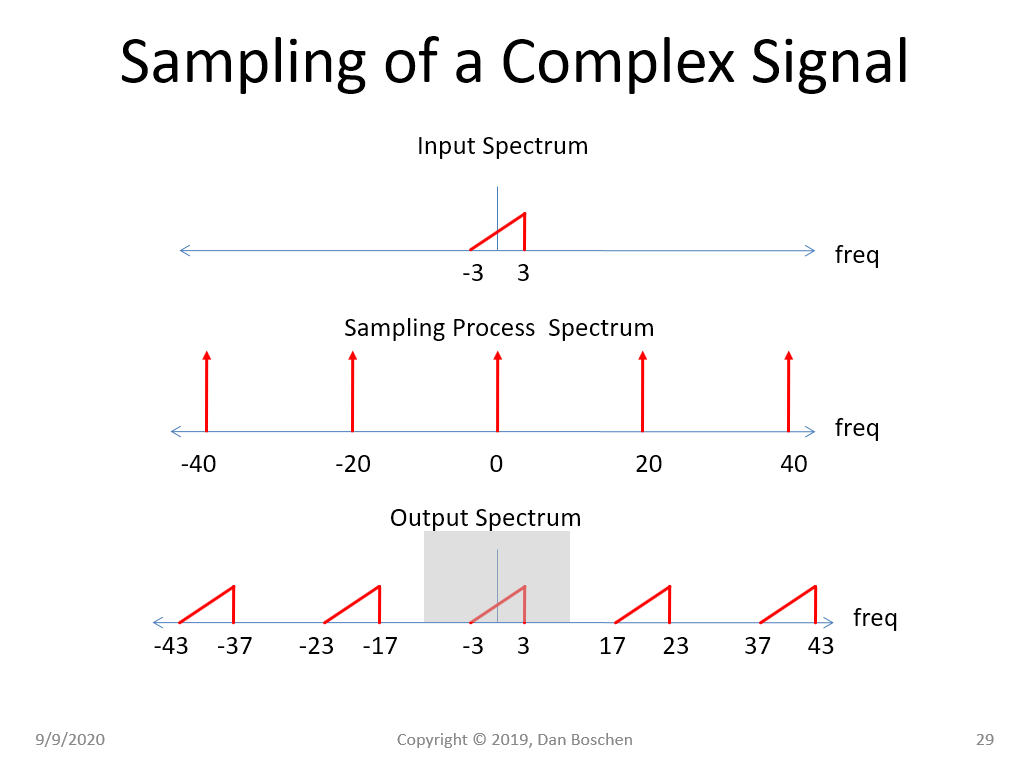 The final Output Spectrum is unique only in the range of $-f_s/2$ to $+f_s/2$, so we often only show that since it also represents already what is in the spectrum if we extended it from $-\infty$ to $+\infty$. However, when dealing with the A/D boundary, as well as when working with multi-rate signal processing, I find it helps intuitively to keep the mental model of the digital frequency axis extending with periodicity to $\pm \infty$.

When we go from Digital to Analog with D/A Conversion, that extended periodic spectrum is maintained. It represents even in the analog what the spectrum would look like if we could maintain the representation of the signal with periodic impulses: Meaning if the D/A output were only weighted impulses in time, and zero in between, as an analog signal, we would have still in the analog world the same periodic Output Spectrum. The problem with this approach is the limited output power and therefore output SNR (Signal to Noise Ratio) we can get by trying to approximate an impulse in time, compared to SNR that can achieved with the zero-order hold approach.

Zero-order hold is the classical D/A Converter topology- we hold each output sample recreating a stair-case representation of our original waveform, and then low pass filter to complete the estimation of the interpolated continuous time waveform. The draw-back with this approach is the Sin(x)/x (Sinc) droop that occurs: A zero-order hold is the same as convolving in time the desired output impulses with a rectangular pulse the width of the sampling period. Convolution in time is multiplication in frequency, and the Fourier Transform of the rectangular pulse that is $T$ wide is a Sinc function with the first null at $1/T$ which is the sampling rate. Thus the spectrum at the output of the DAC will be the product of the periodic digital spectrum with this Sinc, as represented in the lower spectrum below. 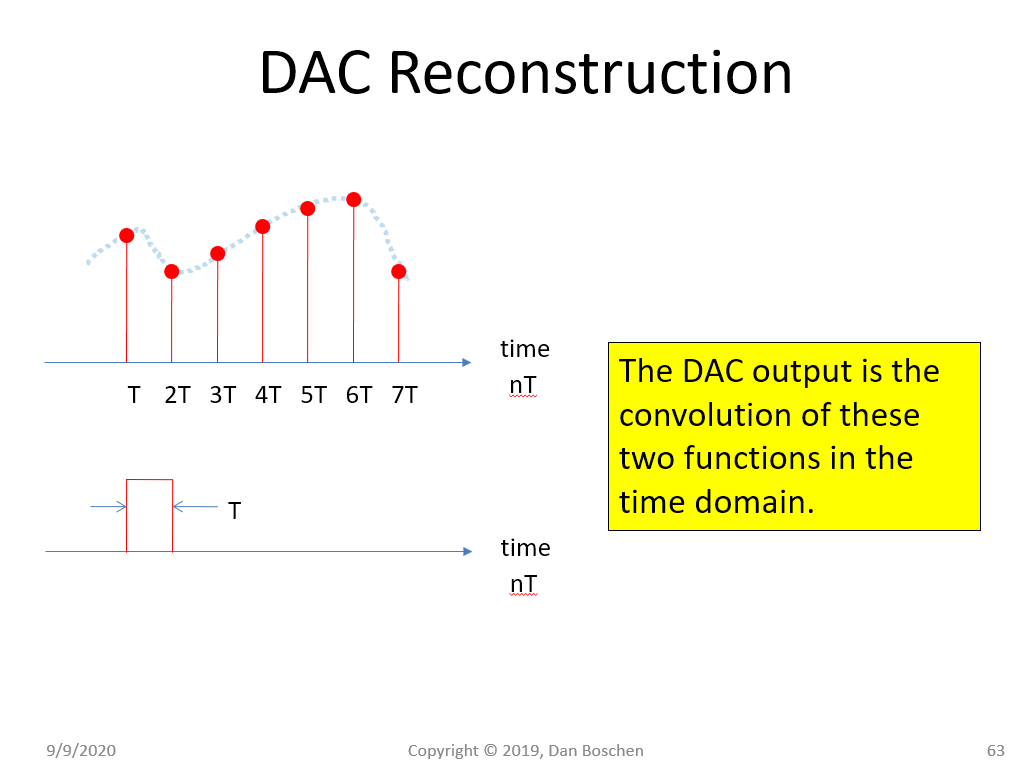 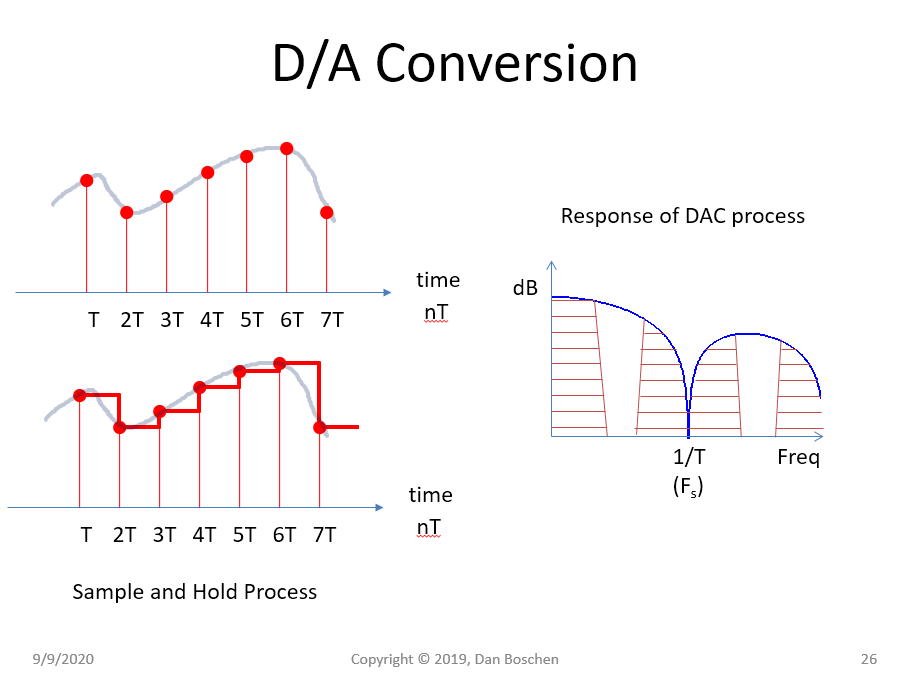 There are D/A architectures that do provide a closer approximation to an impulse output, for example the Return to Zero (RZ) D/A Converter. With this approach the output returns to zero after half of the sampling period, and thus is the result of the convolution of a rectangular pulse half as wide, and with that pushing out the first null to not occur until $2f_s$, reducing the passband droop accordingly at the expense of signal power.

Not the answer you're looking for? Browse other questions tagged sampling analog-to-digital digital-to-analog or ask your own question.

3
Question about decimation/downsampling
0
Output a sine wave from samples-limits?
0
What is Audio codec in simplified term?
5
How Does the RMS of White Noise Change with Sampling Frequency?
3
How to undo dynamic Doppler effect by software?
0
Should we use a digital low pass or high pass filter to remove sensor bias?