Ask Question
Asked 5 months ago
Active 5 days ago
Viewed 54 times
1
$\begingroup$
Closed. This question is off-topic. It is not currently accepting answers.

Want to improve this question? Update the question so it's on-topic for Signal Processing Stack Exchange.

I'm trying to do the following:

What I have done? Where am I? Firstly, I have dived into the math that stands behind the fft and signal processing (basics). I want to do it programatically so I decided to use python.

I performed the fft on the entire "Hey?" voice sample and got data in frequency domain (please don't mind y-axis units, I haven't normalized them) 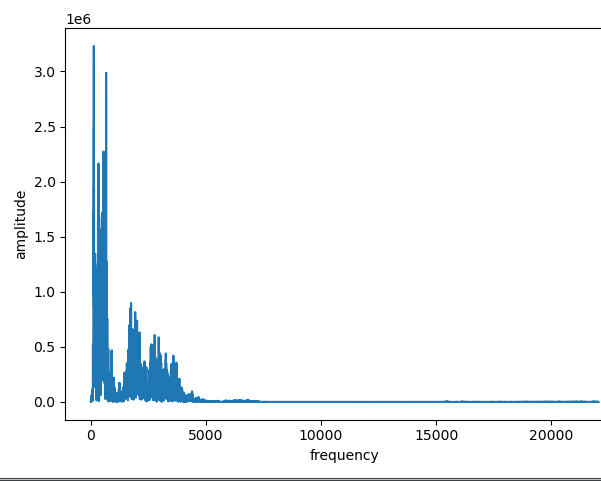 So far so good. Then I decided to divide my signal into chunks so I get more clear frequency information - peaks and so on - this is a blind shot, me trying to grasp the idea of manipulating the frequency and analyzing the audio data. It gets me nowhere however, not in a direction I want, at least. 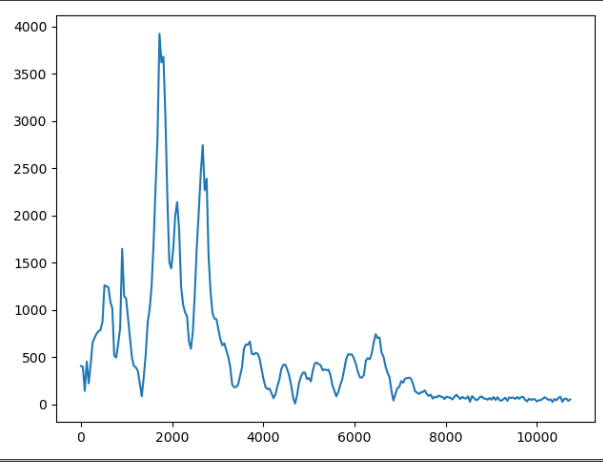 Now, if I took those peaks, got an interpolated function from them, and applied the function on another voice sample (a part of a voice sample, that is also ffted of course) and performed inversed fft I wouldn't get what I wanted, right? I would only change the magnitude so it wouldn't affect the melody itself (I think so).

Then I used spec and pyin methods from librosa to extract the real F0-in-time - the melody of asking question "Hey?". And as we would expect, we can clearly see an increase in frequency value: 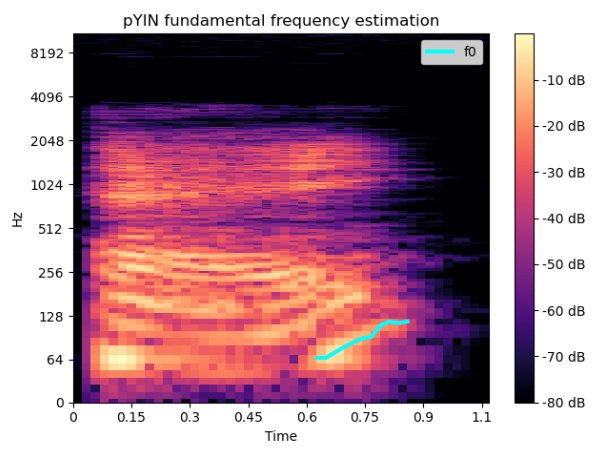 And a non-question statement looks like this - let's say it's moreless constant. 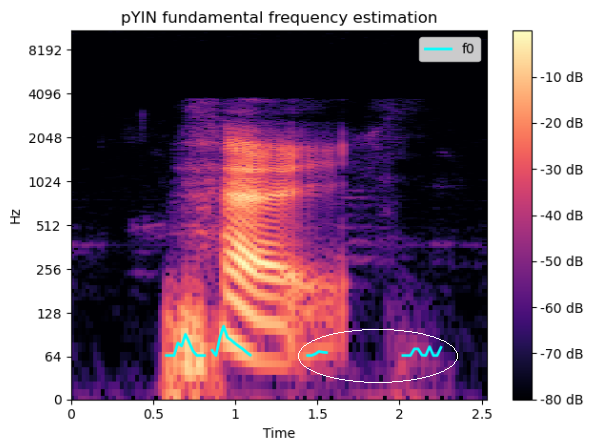 The same applies to a longer speech sample: 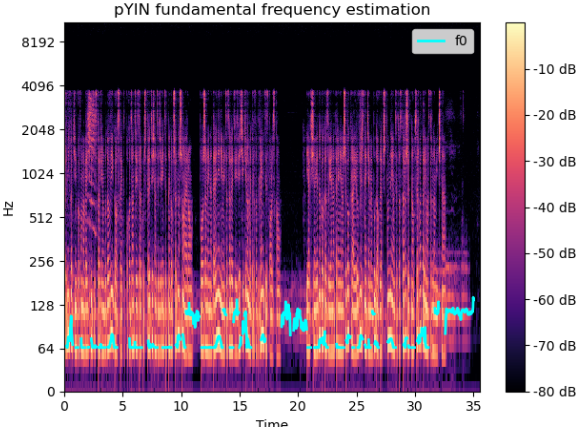 Now, I assume that I have blocks to build my algorithm/process but I still don't know how to assemble them beacause there are some blanks in my understanding of what's going on under the hood.

I consider that I need to find a way to map the F0-in-time curve from the spectrogram to the "pure" FFT data, get an interpolated function from it and then apply the function on another voice sample (I mean curve fitting)

**Is there any elegant (inelegant would be ok too) way to do this? I need to be pointed in a right direction because I can feel I'm close but I'm basically stuck. I need to increase/manipulate frequencies at certain point in time, I know it does mean to move data from one bin to another but I need to know how to work with the STFT data.

The code that works behind the above charts is taken just from the librosa docs and other stackoverflow questions, it's just a draft/POC so please don't comment on style, if you could :)

Hints, questions and comments much appreciated.

The low quefrency MFCC coefficients might be a place to start.

I read a few articles by Stylianou from a few years back where he did funky stuff to peoples voice (gender and age modification).

I've answered the same question on stackoverflow. I've managed to modify F0 by modyfying stft output and the compute it back to amplitudes.

Answer is here, I won't be duplicating the same text here on DSP. https://stackoverflow.com/questions/63339608/change-the-melody-of-human-speech-using-fft-and-polynomial-interpolation

Not the answer you're looking for? Browse other questions tagged python short-time-ft or ask your own question.

1
How do I find the power of a specific frequency at a specific sample of a discrete time varying signal?
3
How can an FFT plot not be symmetrical?
0
Apply FIR filters to Extract Stego from WAV data
4
Why is my DFT/FFT always 90° out of phase?
0
FFT: do I need to include gaps in data in my FFT domain?
0
STFT Spectrum Analyzer: power drops over 15 kHz with songs, not with pure signals
3
What Are The Semantics Of Wav-File Sample Values?
1
Disagreement between Analytic Convolution and FFT Convolution
0
What's wrong with my STFT implementation?