Object identification based on both shape and intensity -- i.e., identify the stars and their diffraction spikes at the pixel level

Here's an example image to make the problem very clear: 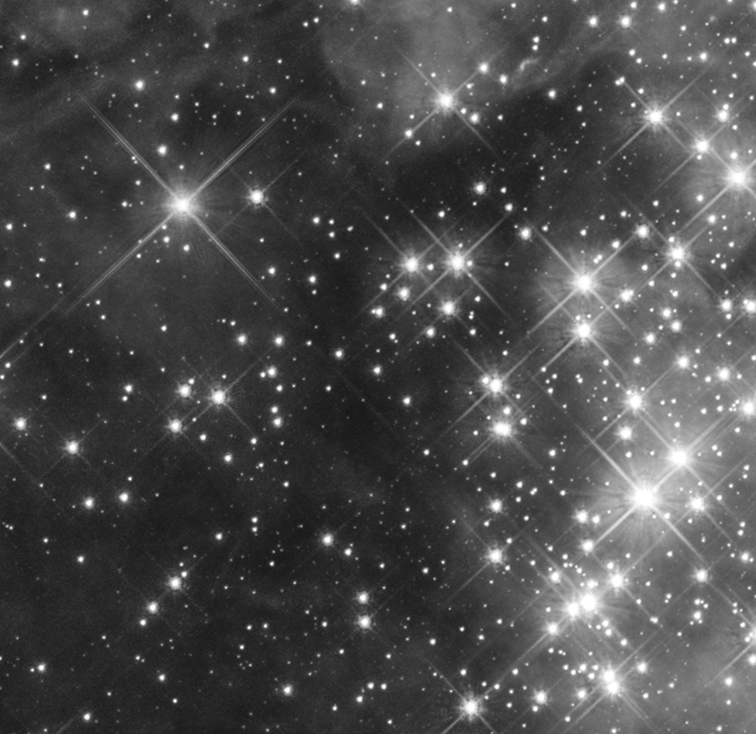 I've used OpenCV's blob_log() as well as the rank.otsu threshold approaches. The problem with the blob detection is that the blob radii are quantized, e.g., 3, 7, 11, etc. The otsu local adaptive threshold works fairly well but needs severe hyperparameter tuning -- in other words, it works in some locations but not others.

I don't know how I can ask the following question: "find all circular blobs in the image. If the blob is large (meaning it is overexposed), expand the search to include diffraction spikes (at known fixed angles) plus the Airy disk."

My goal is to remove the stars and their optical effects from the image, then use an inpainting algorithm to fill in the missing pixels. I have several inpainting candidates to try.

There is noise in the image, and I'm fine with missing any stars that are indistinguishable from noise.

This is one channel -- the other image channels do add additional information, and the actual removal of stars/effects will be based on the logical or of all three analyzed channels.

I am aware that there are other methods for star removal that pop up in google search. The best automatic one I've used is starnet, e.g. in https://github.com/nekitmm/starnet . The issue I have with it is it doesn't separate out the star mask but goes ahead and does the inpainting -- unfortunately, very poorly in large regions. And it doesn't handle spikes well, per the author's commentary and my observations.

I wanted to avoid a machine learning approach. Instead, I wanted to solve the problem directly from first principles. It seems feasible to build a structural model of the star/spike/airy disk with some effort(e.g., as central disk at max intensity becomes larger, spikes grow larger and so does Airy disk.) But how do I match this model to the objects in the image?

The desired output is a 1 bit mask image. Bit set to 1 if this is a star pixel, 0 otherwise. I don't have a problem converting a list of (y,x,r) values to a bit mask, and already have code to do that.

The blob detectors I have used (a) don't compute accurate blob sizes (b) generate blobs for some of the noisy areas.

Regarding finding the isolated blobs being a snap, give me an idea of what you consider is a "snap." My very first attempt looked for local maxima and attempted to grow a circular region. It was very slow and had problems with noise.

The region-growing approaches all failed miserably. A different 2d filtering approach turned out to be more promising. The basic idea is to:

That gives the following result: 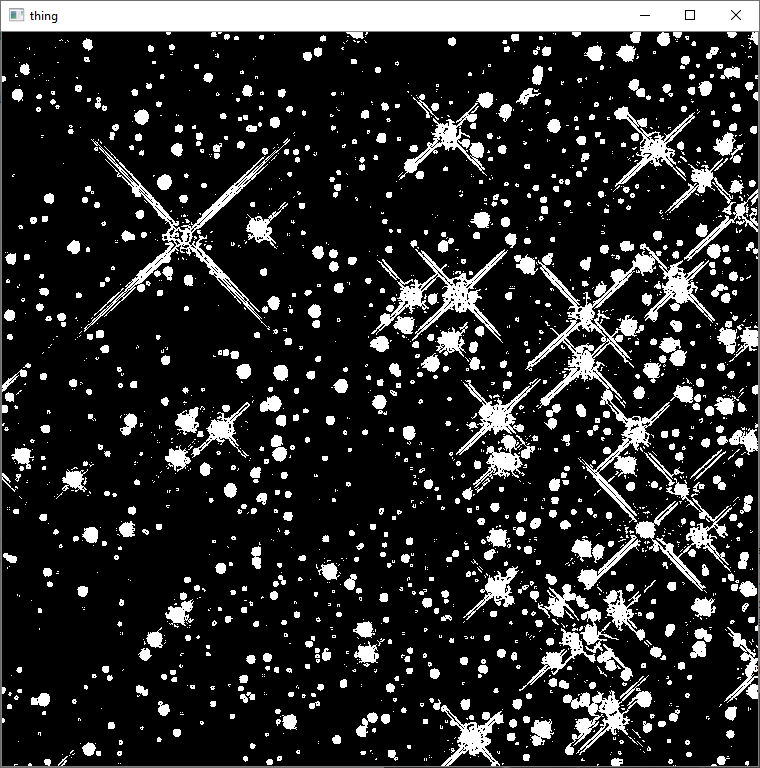 That approach has two magic numbers, yes. But it works fairly well for such a simple algorithm.

I'm aware the blobs are a bit too big in places. Also, the blue and red channels of the original image don't work quite as well due to more noise in them. Time to experiment further.

Here is a first stab. It is essentially a doubly smoothed contour map. 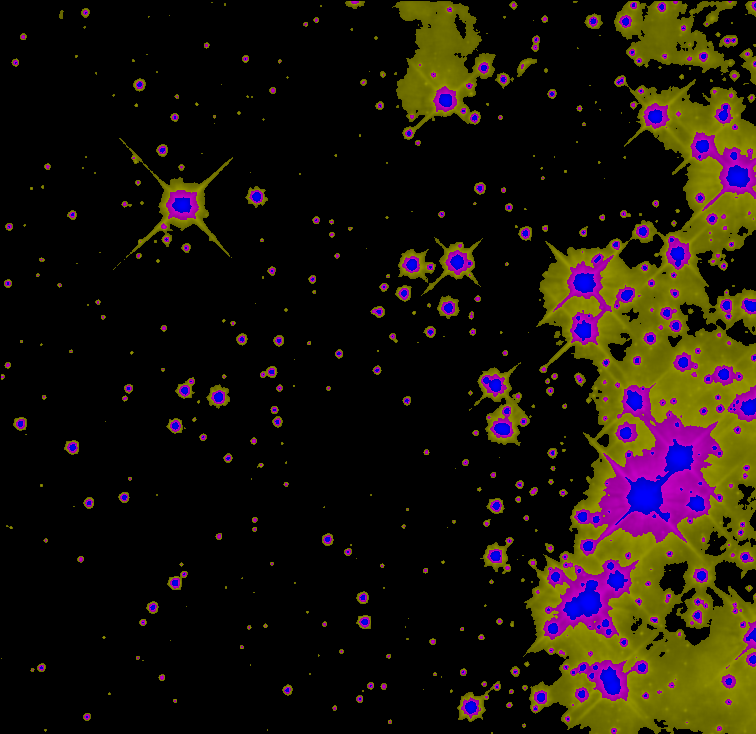 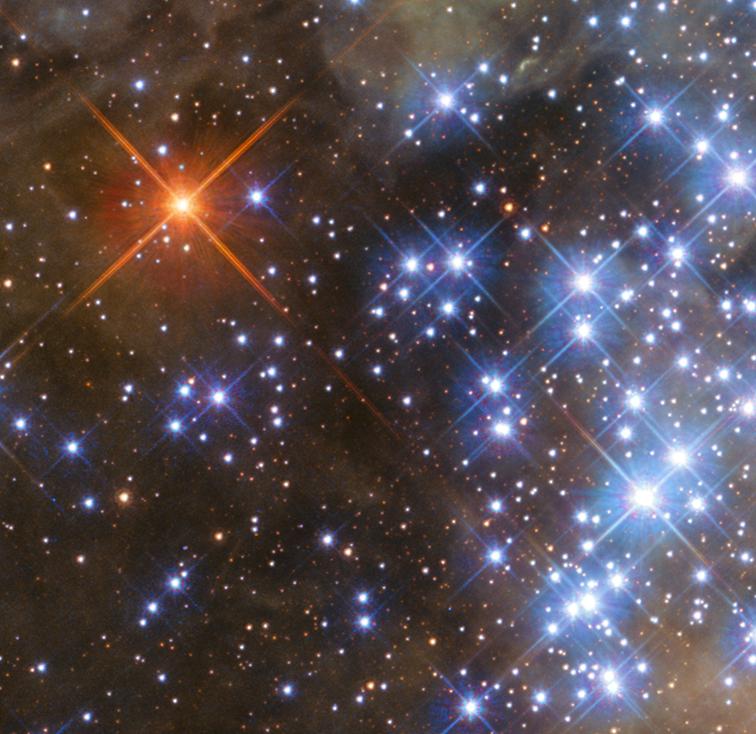 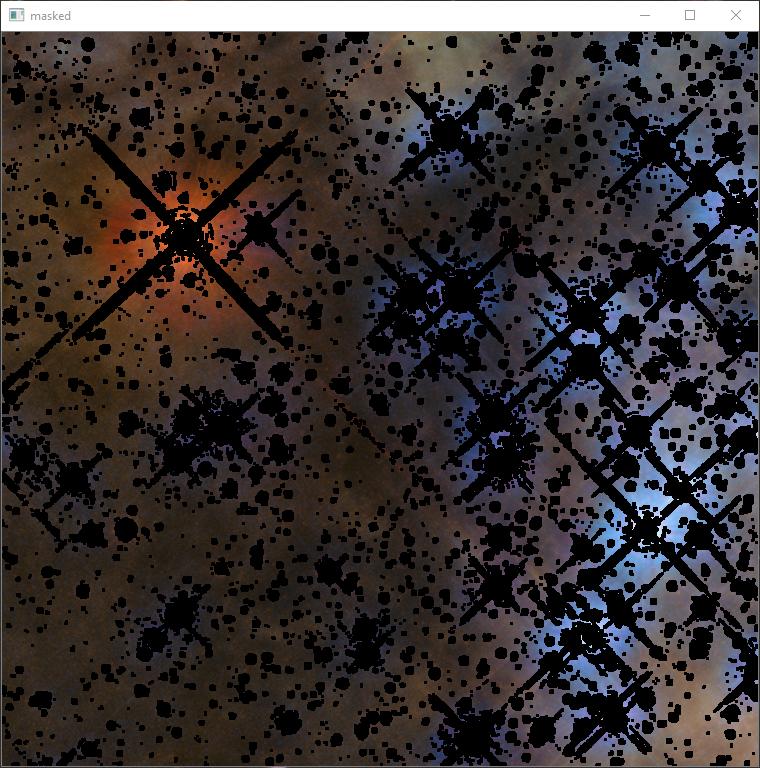 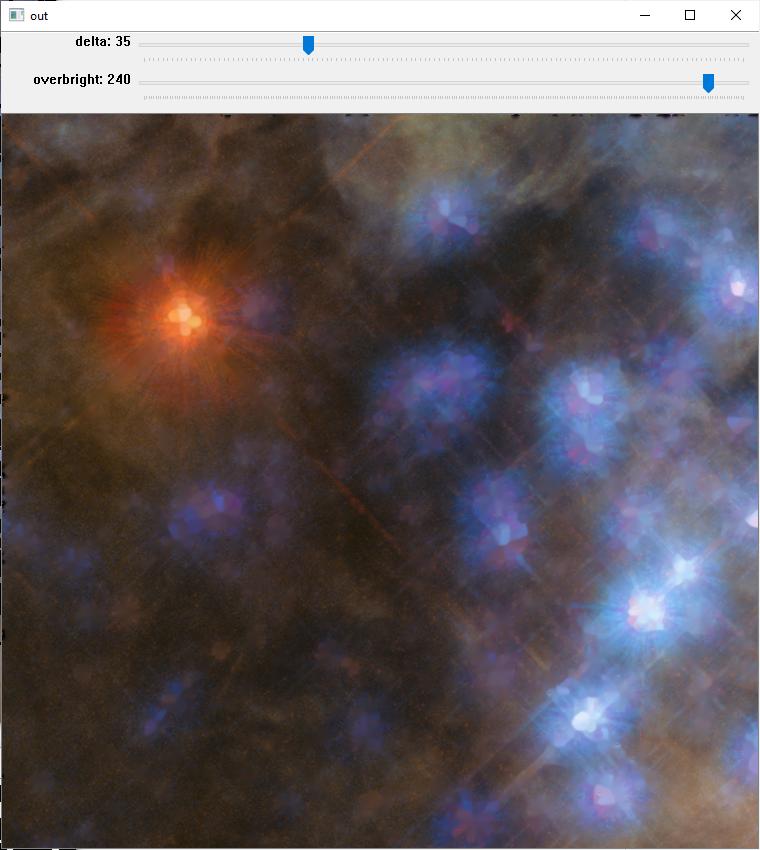 The result is somewhat acceptable, but removing the halo around the brightest stars is going to require a very different approach and a rethinking of what it is exactly I want to accomplish here.

0
Scaling down the modal value when thresholding
7
What Is the Cause for Poor Results with Adaptive Thresholding?
6
Is it possible to do single vehicle tracking using Fourier transform?
3
How does image masking work?
3
Easy way to get rid of noise in a hand drawing
4
Improving Canny Edge Detection and Contours Image Segmentation
1
Transforming Non-Uniformly Sampled Image onto Rectangular Grid
1
Producing masks from mostly-static-background subtraction when given the background
0
Detect lines transitioning to blobs in images