All window functions, which go from zero amplitude, up, then back to zero amplitude, are all base-band signals. Why is this? Are all functions that have this behavior always band-band aka low-pass?

which is clearly greater than zero because $w(t)\ge 0$. For all other frequencies we obtain the following bound:

From the seminal paper on the subject by harris: 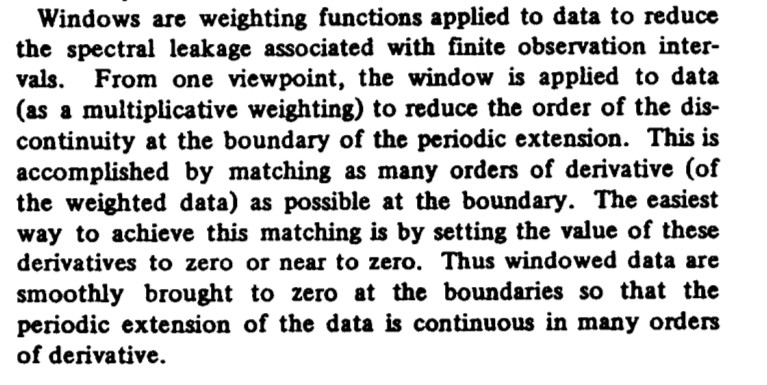 "On the Use of Windows for Harmonic Analysis with the Discrete Fourier Transform. FREDRIC J. HARRIS"

I've recently discovered a new family of windows. They are very special.

You can think of them as the discrete version of the Raised Sine Windows (Equation (25b) in harris' paper).

These windows literally zero out the sample values to achieve this effect.

Not the answer you're looking for? Browse other questions tagged frequency-spectrum frequency window-functions window baseband or ask your own question.

11
Is the discrete Gaussian kernel an eigenfunction of the DFT?

16
Why do we use window in time domain rather than do FFT modify the spectrum and than inverse FFT
1
STFT - Window Functions
5
Why should one use windowing functions for FFT?
0
Modified Tukey window applied in frequency domain
11
Why would one use a Hann or Bartlett window?
1
how could window function really suppress those frequencies that we don't want?
0
Half Window Functions and Formulas
1
Cosine window function & signal with nonzero mean