What is the functional difference between DSB and 2SB mixers, and why exactly would 2SB be better for radio astronomy?

The Astronomy SE question 2SB mixer in radio astronomy? asked in 2014 in its entirety:

In literature about the instrumentation of radio astronomy, I frequently come across a type of mixer described as "2SB". I'm familiar with single-sideband (SSB) and double-sideband (DSB) mixers, but I have never studied a 2SB mixer.

What is a 2SB mixer and how does it compare to a DSB mixer? Ideally, I would also like to know of formal references that directly address the topic for further reading.

is interesting, but its lone 2014 link-only answer in its entirety:

2SB is Dual Sideband, as opposed to DSB - Double Sideband. Here are a couple of papers you might find relevant and interesting:

a 2SB upgrade replacing a DSB1

a paper that mentions the advantages of 2SB over DSB2

leaves me still not really understanding the difference between 2SB and DSB mixers nor exactly when one would choose one over the other.

My impression is that DSB mixers suppress the carrier while allowing both sidebands to pass through a single output, while 2SB mixers further separate each sideband to a separate output.

Is the separation of the two SBs to two outputs the functional difference between 2SB and DSB? If not, what would it be?

Almost certainly yes, although it seems that the only hits that "2SB mixer" gets is for astronomy sites. See the figure, from the first paper you cite. It clearly shows two sidebands being received independently.

Basically, you're getting two SSB channels out of this, which, presumably, can be selected downstream. 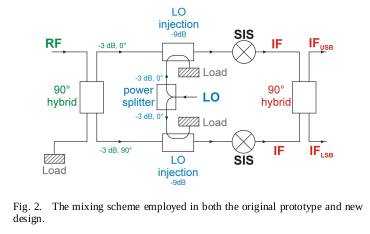 The abstract of the second linked paper says that 2SB mixers' "main advantages being to avoid spectral confusion and to diminish effective system temperature by a factor two with respect to double sideband (DSB) receivers." Is it possible explain in fairly simple terms what that is so?

Noise temperature: Noise temperature is a function of the ratio of noise power to desired signal power. Because the DSB mixer output power is the sum of the LSB and USB power, it's output has the noise contribution from both of these sidebands. Because (based on the context of the article) the desired signal is in only one sideband, you're getting the noise power from two sidebands, and signal from one.

Not the answer you're looking for? Browse other questions tagged demodulation radio or ask your own question.

1
Why is a precoder necessary for DQPSK and what does it accomplish?
9
What is the connection between analog signal to noise ratio and signal to noise ratio in the IQ plane in a quadrature demodulation system?
1
What are the fundamental reasons that suggest us to minimise transmission power for energy-efficient radio link design?
1
What is the relation between the carrier frequency and the attenuation of electromagnetic waves?