where my $A$ is unknown. I have samples of the sine wave at discrete points within an interval that's shorter than $\lambda/2$ represented by the red line in the plot. 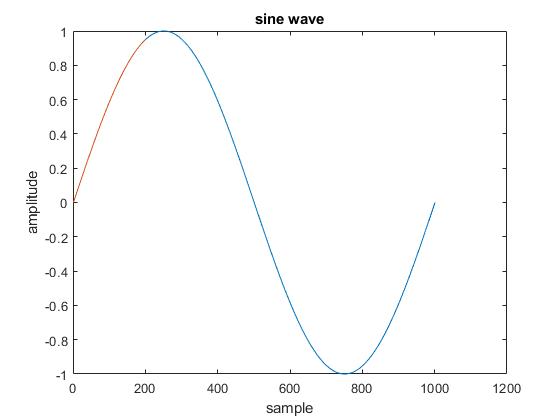 It must be possible to somehow determine $A=1$ through reconstruction or so from my samples given by the red line. How can i do that?

If your signal is really as simple as

with known $\omega_0$, and you have observations $y(t_i)$, which are noisy samples of $x(t)$ at known time instances $t_i$, then a simple solution would be the least squares estimate

Of course, this simple solution won't work if your signal actually has the form

with unknown phase $\phi$ and DC-offset $c$. However, you can compute optimum least squares estimates for that problem too. This is discussed in Cedron's answer.

Build a basis set with your frequency and match your signal. It is straightforward linear algebra:

$C$ is portion of cosine

$S$ is portion of the sine

[Overengineered solution to account for any vertical or horizontal shifts, use Matt's if you know it is a simple multiple.]

If samples are results of precise measurements, the amplitude is any of ratios $sample_i/sin(ω·t_i)$.

If the noise is present, some kind of averaging is needed. Because a single parameter is calculated, and no information is given on noise distribution, a simple weighted average is the only available option: $A_{avg} = {Σ(sample_i·sin(ωt_i))\over{Σsin^2(ωt_i)}}$. A weighted sample variance is $(σ_w)^2 = {Σ\{sin(ωt_i)·(sample_i-A_{avg}·sin(ωt_i))^2\}\over{Σsin(ωt_i)}}$

Not the answer you're looking for? Browse other questions tagged discrete-signals reconstruction wave or ask your own question.

-3
Can digital filters actually separate signals?
1
How to determine the sine Fourier coefficients of discrete data?

7
Why does a wave continuously decreasing in frequency start increasing its frequency past the half of its length?
6
Determining the mean of of a sampled signal (improvements to time averaging method)
9
Signal values we will 'miss' between sampling instances during sampling of band limited signals
4
How to include phase in a sinusoidal Kalman Filter
1
Reconstructing Signal From Its Cyclic Autocorrelation
3
Measure Sine Wave Amplitude from ADC Signal
4
Reconstructing/interpolating small regions of a bandlimited signal by taking the fewest possible samples
0
Discrete time sine wave generation near nyquist