." Most general-purpose microprocessors can also execute digital signal processing algorithms successfully, but may not be able to keep up with such processing continuously in real-time"

Please elaborate with example/application? What is meant by real-time here in context of dsp? 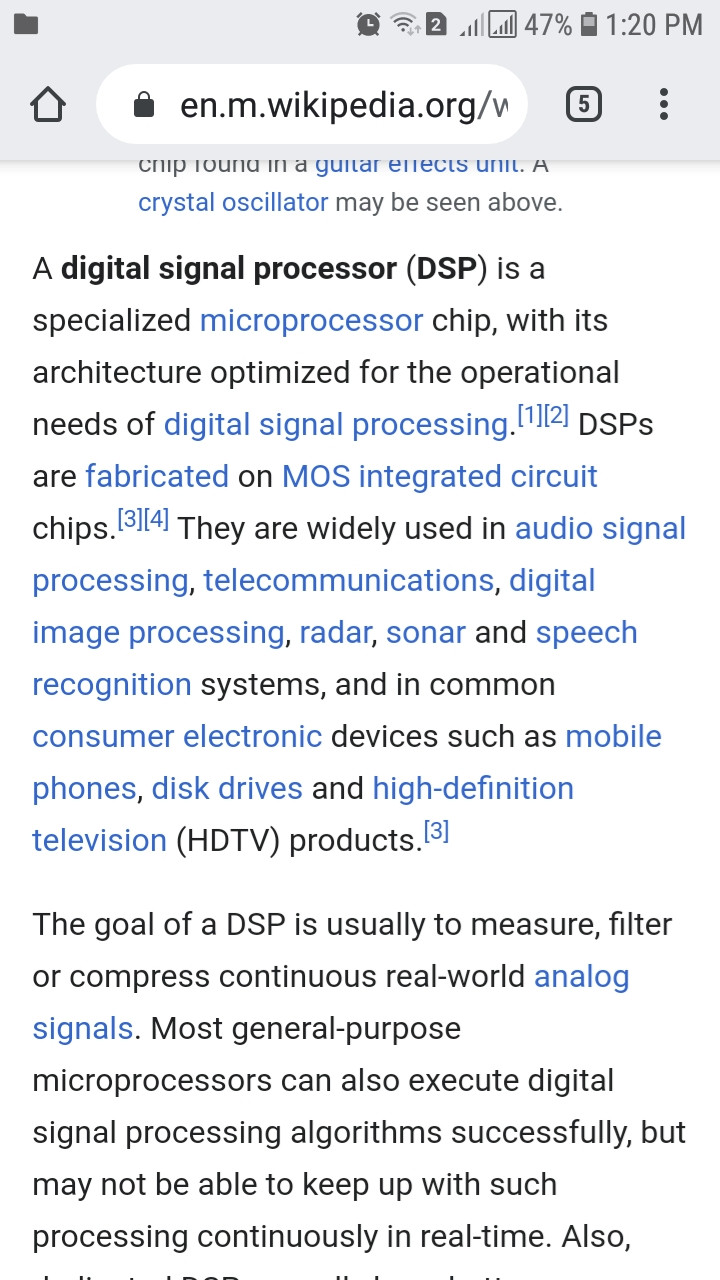 The staple processor instruction of specialized DSP processors is a multiply-accumulate instruction. The vector multiplication and summation are performed in a single command fetch, it's a sort of SIMD (but not exactly). Only advanced MCU's have this instruction in their command set. Hence the advantage of DSP processors over general-purpose MCU's w.r.t. ALU performance on typical signal-processing operations, even when comparable technological process are used in their manufacturing. The same for FPGA devices with internal DSP blocks. In short, less command fetch cycles, higher performance.

Real Time means having time-limit or time-constraint to complete assigned processing. For example : If you are using a DSP processor in the receive chain of a Communication system with certain Symbol Rate, then the processor must be able to process a symbol worth of data within a limited time-constraint in order to keep up with the received signal. If it cannot complete processing of a symbol within that certain time-limit then the received signal samples will start to pile up pending for processing, and eventually the processor will run out of the limited Memory that it is having.

And the reason why general purpose Microprocessors cannot keep up with the real-time requirement is because they lack specialized processing units which can perform vectored MAC(Multiply-Accumulate) operations. They lack SIMD(Single Instruction Multiple Data) architecture, which enables the processing of multiple data with a single instruction in a single fetch cycle.

Thus, compared to general purpose microprocessors, DSP processors can perform the MAC operations on large number of data in smaller number of instructions.

DSP algorithm implementations (software coding) are easiest when your microprocessor has an FPU hardware, but it's also possible with integer (fixed-point) ALUs too.

This means that your microprocessor should either have a dedicated FPU, or it can use a (very inefficient) software emulation for FPU operations. Alternatively one can try a more difficult to program, but more efficient to run, fixed-point approach with integer based arithmetic as well.

Nowadays most (but not all) CPUs come with some 32-bit (or even 64-bit) FPU hardware built-in. But that's not enough.

DSP algorithms require not only an capable arithmetic unit, but also high data throughputs depending on the application. A speech coder can very well be impemented in real-time with a mediocre CPU, while a video encoder in real-time may be hard to achieve.

Real-time means that your processor should be capable of finishing its chunk of job, while live data (opposed to offline data) is fed into it, without overflowing internal storage buffers. This happens, for example, when you play an electronic keyboard; as you press the keys, their sound should be immediately (less than detectable delay threshold) processed and output, before the next keys were pressed (or they will overwrite and skip previously pressed key notes). Or, you want to record input audio as an mp3 file. The input data stream through microphone should be encoded into MP3 audio format before the next buffer filled in so that previous data buffer won't be overwritten.

For high data-rate real-time applications, general purpose CPU may be inefficient or insufficient due to its architecture; so the architecture of CPU is modified. SIMD based FPUs, more cores for parallel processing, optimized caches, and special RISC instruction set (as opposed to CISC) should be employed.

And that's what is referred to as a special purpose DSP processor.

Not the answer you're looking for? Browse other questions tagged dsp-core real-time terminology embedded-systems or ask your own question.