How to create a single variable describing these peaks?

First, I would like to point out that I am a complete outsider to the field of signal processing, so please bear with me and go easy on the jargon :) I nevertheless decided to post here, because I believe your field has developed the best methods for the kind of problem I have.

I want to do a statistical analysis on a dataset. I have a list of subjects, and a measurement was taken for each subject multiple times over a time period. To do my analysis, I want to first transform my data from longitudinal, time-series data to one single number per subject that somehow describes the "peak" in the data, if there was such a peak. I would like your advice on algorithms that can be used to calculate such a number. 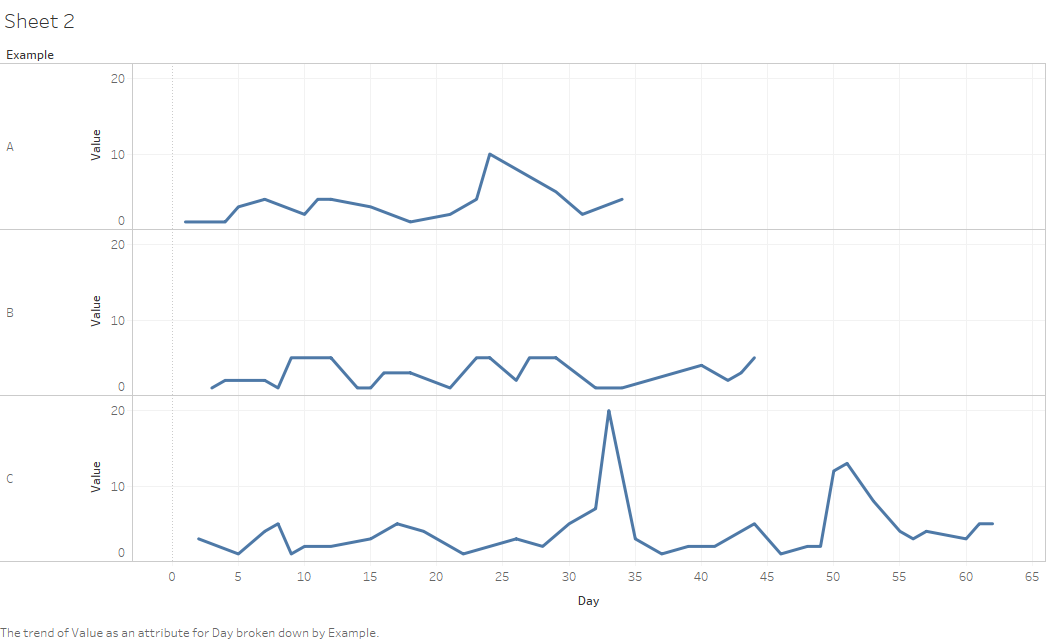 I am including some example data in a picture. In my layperson terminology, I would say that:

I would like the algorithm to be able to produce a number that maps the "largeness" of the peak to a rational number and goes towards 0 when there is not really a peak. I don't have a perfect definition of my "largeness" measurement, but it should combine

I suppose these four criteria won't be doable in a single calculation - that's OK, I can imagine taking a weighted sum of them and being able to play with adjusting my own weights. But if you know of a better way, I am open to it.

To make the task a bit harder (well, it's real-world data), the measurements are not taken at regular intervals, the intervals vary even within a single subject, and the duration of measurement varies considerably between subjects. Also, I expect that there are no underlying patterns in the noise, cyclic or otherwise. On the bright side, I am not doing any real-time calculations and I expect no more than 500 subjects, so I can afford computationally intensive algorithms.

I don't expect a full mathematical explanation of the workings of the algorithm(s) here within an answer. But as I don't have an overview over the field, I would be very grateful for sketching the kind of approach I can take, with names of algorithms and ideally pointers to books or publications that describe these algorithms. Also, if there are other important factors which determine something interesting about a peak, I am interested to hear about them.

Browse other questions tagged shape-analysis or ask your own question.

2
Processing and feature extraction from very short signals
1
How to find position, scale and rotation of a known shape/contour in an image?
1
Need a similarity metric that describes these two curve as highly similar