Will the phase of the reconstructed data using a single MRI k-space point show any curvature? 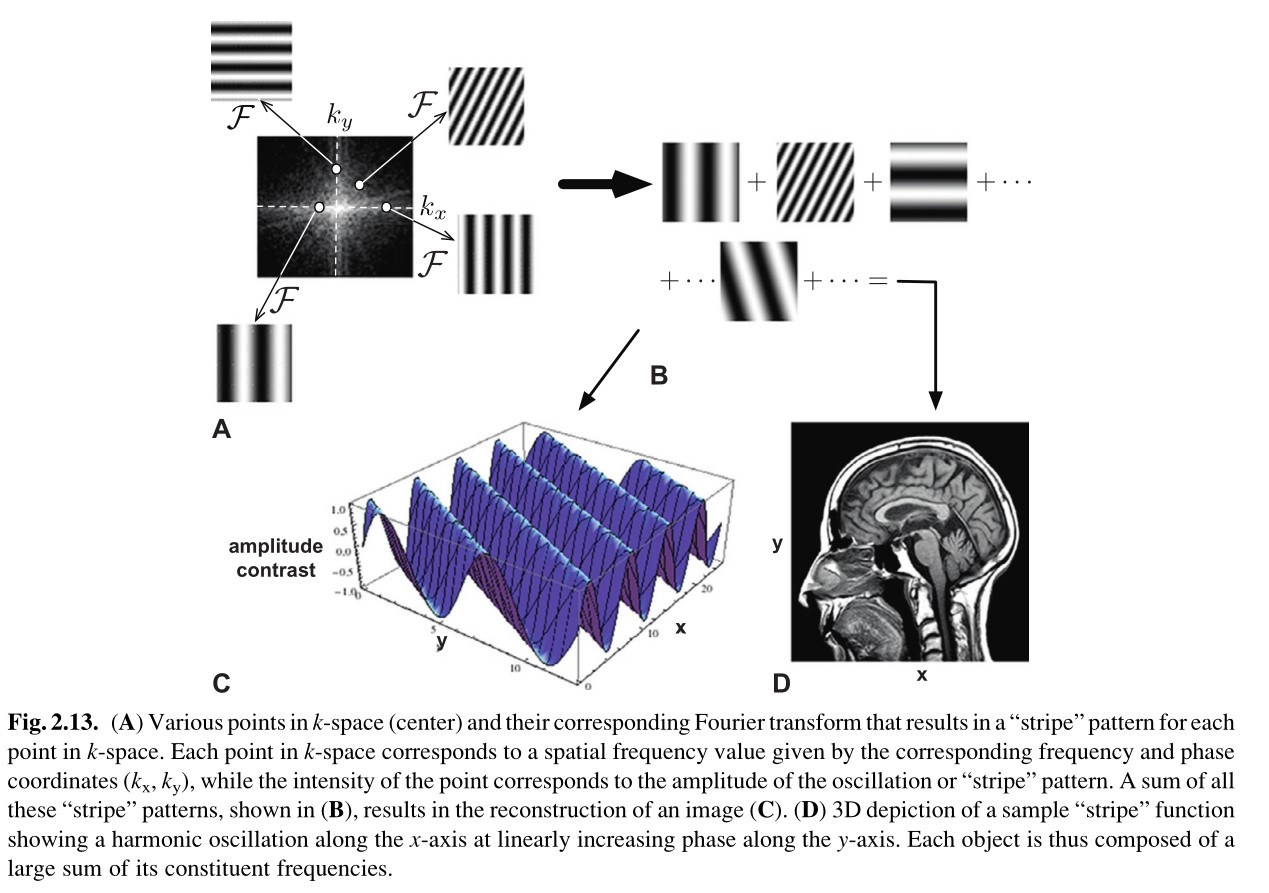 Consequently, if I reconstructed the image using only a single point in k-space data, the phase of the constructed image will change periodically(Exactly speaking, it changes linearly. The periodicity comes from phase wrapping). This means there will be only straight lines in phase map.

Here is a simple MATLAB code snippet for demonstration:

But some other courses say: the phase map will show curvature if the encoding gradient has a poor linearity. For example, the content of stanford RAD229 https://www.youtube.com/watch?v=uO--lYGjvFM begin from 14:40.

The k-space data itself won't know whether the gradient is good or not, but the meaning of each point wouldn't change. If each point of k-space only represents a certain stripe pattern. The phase of the reconstructed "image" using a single ksp point will change periodically (which means no curvature in phase map) even if the gradient has a poor linearity.

Conflict: Which one is right? Is there any way to generate the phase map showed in RAD 229?

Update: Here is a small demo in 1D case：

My question is about the variable phase in this code. If the video is right, the plotted phase should be curved. But the result shows that the phase is still a straight line( after phase unwrapping). 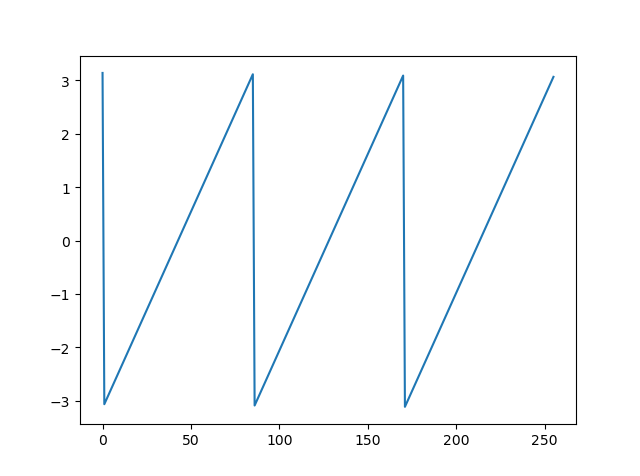 I've acquired some images using a poor gradient unit. The images are distorted obviously but I cannot find any curvature when analyzing these data using the above mentioned matlab code.

It does. A simpler way to think about what sort of "stripe pattern" would be generated by a point $(m,n)$ in k-space is to imagine a wave that propagates along the direction of $(0,0) (m,n)$. That wave has a frequency that is proportional to the distance of $(m,n)$ from the centre $(0,0)$. Also, you might find this and this useful too.

Consequently, if I reconstructed the image using only a single point in k-space data, the phase of the constructed image will change periodically. This means there will be only straight lines in phase map.

This is not strictly accurate, or maybe it is described in a vague way here. The "phase of the constructed image will" not "change periodically". It will vary linearly.

If the phase varied periodically, the reconstructed image would look like frequency modulation.

Phase is the first derivative of frequency.

Here is an illustrative example in Python (but easily generalisable in other platforms):

Here, p is our phase vector. As you can see, it is just a line that increases at a specific rate. If you feed this phase to a sinusoid, you get a specific frequency. If you want to generate a higher frequency you make the slope that the phase varies steeper. For example y = numpy.sin(10*p). This will give you a 10 Hz sinusoid running for 1 second at a sampling frequency of 100Hz.

By saying that "...the phase [...] will change periodically..." what you imply is that p somehow oscillates. But what will happen if we get an oscillating p? (Frequency Modulation).

Here is a very simple example (it comes as a continuation of the above one): 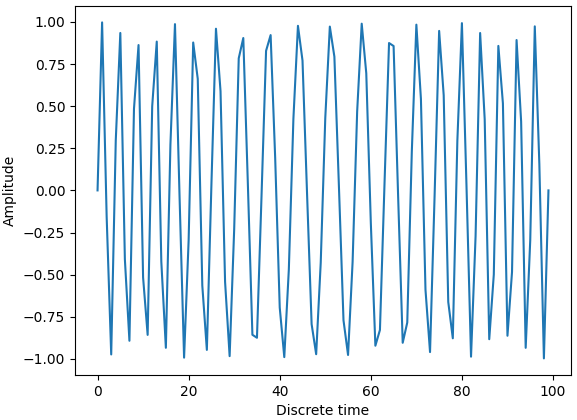 You can see here that we start at a high frequency, we go to a lower frequency and then back up again to a high frequency. The phase here still "evolves" at a linear rate but on that ramp, we have superimposed a sinusoid to show what happens when "...phase change[s] [...] periodically...".

What you are asking, is actually answered in the Stanford video you cite within the first 5-10 minutes.

To understand the sort of distortion that the gradient brings to the image, you have to understand how does frequency map to space in the MRI.

If the magnetic field varies non-linearly (first 5-8 minutes of the Stanford video), then where you excite (or receive from) is not where you think it is.

This is what distorts the image.

An extreme example in 1 dimension is (again, as a continuation of the above) 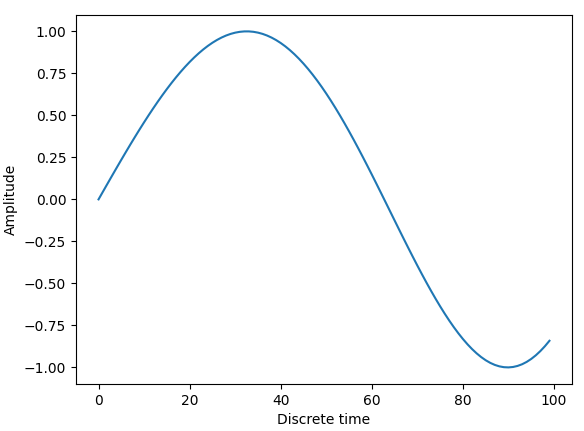 This was supposed to be a "normal" sinusoid cycle but due to the fact that the phase does not change linearly, what we see here is a distorted version.

Here is the difference between the linear evolution of phase and the profile that causes this distortion: 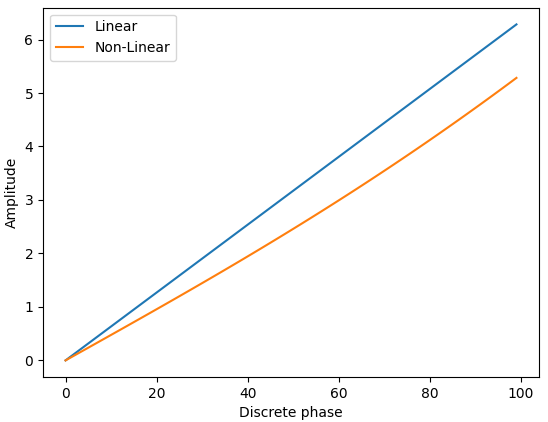 To the points raised:

...my question is whether the phase is a straight line or curved?

You seem to be referring to the phase spectrum as obtained from the Discrete Fourier Transform (DFT).

This has nothing to do with the reason behind the image distortion and impossible to "probe" from a single image.

The distortion of phase because of gradient non-linearities is something that happens BEFORE the data is captured. By the time the signal is captured it is distorted already.

Therefore, if you do not have a reference image (that is, an image that is distortion free), it is impossible to "see" the phase distortion. You could try infering it too, but that would be valid up to a point and for assumed distortion profiles. The only reason why we are able to tell that an image is distorted is because we know the anatomy.

I just want to reproduce the results in this video.

The results presented in the video come from a simulator. The very first equation presented at the top left is the one that is used to map gradient phase to k-space position. If you don't have $\vec{G}$, it is impossible to know how $k$ gets deformed for a given image.

You can remap the phase yourself with a function (that is, change the balance between the imaginary and real components of an image's complex DFT) and proceed with the reconstruction, or, you can achieve the end result of the distortion via an image geometric transformation. This transformation is literally a remapping of the pixel positions to new positions which is exactly what happens when the gradient contains non-linearities. For more information you might want to see this.

Not the answer you're looking for? Browse other questions tagged fourier-transform mri or ask your own question.

2
Analyse audio/music frequencies without STFT, at 1/f temporal resolution, using probe phasors at logarithmically-spaced frequencies, O(N log N)?
1
Using only positive frequencies in fourier domain, How will it affect the ifft?
2
Has there been any research on time-windowed spectral estimation using more than one window function at the same time?
0
area under the phase encoding gradient in MRI
0
How to get the data (pointwise frequency, amplitude and phase) in a FFT performed on ImageJ?
1
What is the significance of the linear phase in the phase response of an M-point moving average filter?
0
Why does my amplitude change upon inverse Fourier Transform when I am only randomizing the phase of the fourier transform using Python numpy?