Is there a recommended amount of attenuation for rectifying edge artefacts?

I just noticed that Spotify fades in/out the music when you play/pause - is this to avoid clicking?

My guess is that for Spotify, it is not just about avoiding clicks, but also to improve the DJing kind of experience. The fade length seems to be a user setting in Spotify. Based on my testing with 20 Hz and 440 Hz test tones and Virtual Audio Cable, YouTube doesn't fade in or out or do any other kind of click removal when pausing, here with 20 Hz test tone:

The following "floatbeat" program plays this fade twice a second (once in and once out per second):

Try running it and adjust fadeLength. At least for me, using good headphones at normal music listening volume, a fade length 0.03 s is only barely audible as a thump, and increasing it to 0.04 s makes the thump disappear. I think 0.03 s is pretty safe.

Running this, I can't hear a click in fade in or fade out. I know there is a fade from the way it sounds and because I do a lot of music editing, but it does not register as a gradual process, more like a smooth event.

Let's try some other fade shapes of length 0.03 s too, with my comments comparing each to Eq. 1: 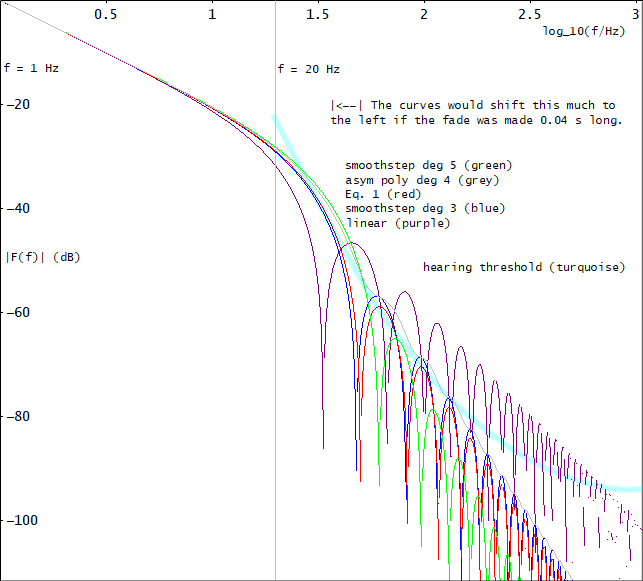 I also included the pure tone hearing threshold curve from ISO 226:2003. Some caveats: I do not know the listening volume level so I just shifted the curve in dB scale until it matched my subjective hearing experience with the fade curves peaking above the threshold at roughly those frequencies at which I heard them. Also, the threshold curve has been measured for pure sinusoidal tones whereas here we are dealing with transient sounds. The level comparison between the two cannot be well defined. It would be better to do the analysis with something like a compressive gamma-chirp filter bank which better models hearing. I used closed-back headphones, but still my listening environment has some fan noise and such, so not perfect silence, so there could be some auditory masking going on. Despite all the caveats, I think the threshold curve is useful to show here as it seems to match what I heard. It also hints to that there may be a better fade shape that moves some of the energy from the first spectral side lobe to the main lobe, using window function terminology. Perhaps a better fade shape, one that barely touches the hearing threshold at multiple early lobes, could be obtained by integrating a suitably parameterized Ultraspherical window. Or perhaps there are ways to trace the hearing threshold for all lobes.

Not the answer you're looking for? Browse other questions tagged attenuation or ask your own question.

3
Given a wide band signal with equal SNR over the whole spectrum, what should the stop band attenuation be for a decimation filter?