How to compute transfer function

I am trying to calculate a PID controller for this function. This function describes heat transfer via conduction. I want so see first the step time response and impulse response for this system. I usually use for other functions the tf function from Matlab, including IODELAY, but in this case i can't compute $\sqrt{s})$.The error is:Undefined function 'sqrt' for input arguments of type 'tf'. Is there any other way to compute this transfer function? 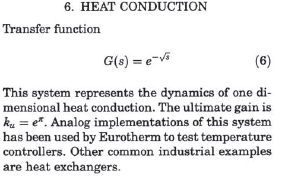 Hi again, i just edited it because i found more information.In my case i guest that T=1. 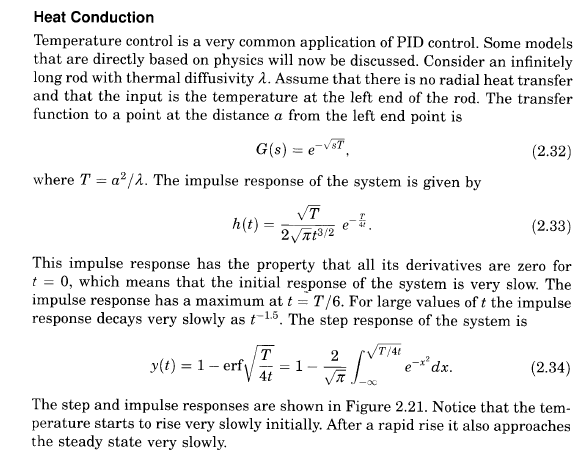 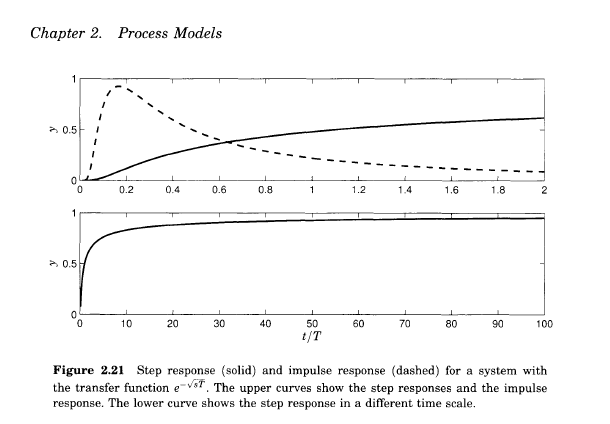 The inverse Laplace transform of $G(s)=e^{-\sqrt{s}}$ can be computed analytically:

[I've cross-checked this result by looking it up in one of my old math books.]

So now you have an analytical expression for the impulse response $g(t)$.

The step response can also be computed analytically. It is given by

where $u(t)$ is the unit step function, and $\textrm{erfc}(\cdot)$ is the complementary error function. The result $(2)$ was obtained with a little help from WolframAlpha.

And that's how the impulse response and step response look like: 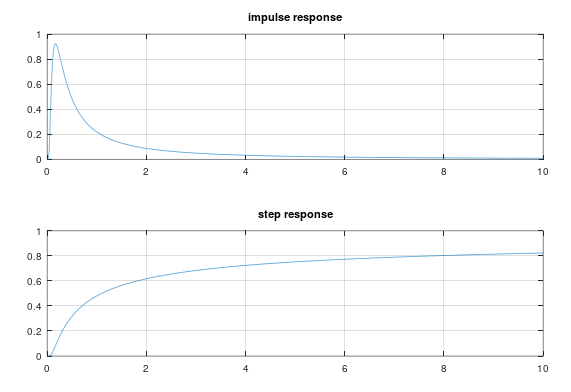 Matlab can only deal with transfer functions that are rational ratios of polynomials in $s$ (or $z$, if you're in that domain). So you must approximate. You can either use the responses that @Matt L. has shown you, and convolve by the impulse response at each step, or you can write the partial differential equation (not an ODE) and solve it at each time step, or you can approximate the transfer function as a rational fraction of polynomials in $s$.

For the rest of this answer I'm going to assume that you really mean $G\left ( s \right)$ is some lazy shorthand for a real-world dimensionally sensible form. If so, then you must really mean that $G \left (s \right ) = k e^{-\sqrt{\tau s}}$ where $k$ is in whatevers over whatever elses (what are your inputs and outputs?) and $\tau$ is in seconds so that $\tau s$ can be in Napirs.

You want something that has a good-enough fit for you -- and this changes depending on the problem you want to solve. If you're designing a closed-loop controller, a good enough fit is probably one that doesn't deviate by more than five degrees or so in phase and 1dB or less in amplitude over the frequency range at which your closed-loop gain is higher than -10dB or so -- which means that depending on how aggressively you're designing your controller, you need more or less terms in your approximation.

You will, in essence, be designing a linear time invariant ODE that simulates the partial differential equation whose transfer function is $e^{-\sqrt{\tau s}}$.

Whatever else I did, I'd take the impulse and step response of my approximation and compare them to the ones that @Matt L. has shown you, and I'd make sure that they were close enough to be intuitively satisfying.

Not the answer you're looking for? Browse other questions tagged matlab continuous-signals linear-systems transfer-function laplace-transform or ask your own question.

4
Response of a system to a step function (heaviside)
0
Question regarding transfer functions and prerequsities for finding the real impulse response
2
How to plot magnitude response using freqz in matlab if I have a transfer function without a denominator
3
Control design: under what conditions can closed-loop poles be placed arbitrarily?
1
How to filter a white noise or random noise in Matlab Simulink?
5
Unstable plant transfer function identification
1
Why does the unit step function not have infinite poles?
0
Apply Transfer Function in Continuous Domain in Matlab