How is it in pictures? as far as I know, a sinc-filter is not applicable in photos. so my question is, is aliasing always in pictures?

i see aliasing happening when the image is captured with a sensor that cannot capture higher frequencies.

If i capture a image, is it always aliased?

That's often the case because of the physics behind things, or simply because the motive isn't higher in frequency.

(Physical effects include motion blur, abberation, depth of field/ring of confusion/bokeh, wave effects on apperture edges, lens imperfections, air density variations and many more. I'd recommend you look for tutorials on how to take really sharp macro and tele photos to learn what effects can reduce your image bandwidth.)

But, sure. Go photograph a fine grid, and you see a Moiré pattern. By the way, your eyes have limited resolution, too, although I'd presume the brain largely adapts that away.

Other types of aliasing are as far as i understand not really aliasing. e.g if a screen has not many pixels, the image is aliased.

You call it aliasing, it aliases things, you describe it as aliasing: It's really aliasing.

To have exactly zero aliasing, you need to reduce energy >= samplerate/2 to exactly zero (assuming that you are interested in the lowpass part). I believe that is usually impossible, but say that the residue is <-48dB below the desired lowpass signal. Then your aliasing noise is in the ballpark of an 8-bit quantizer, which might be enough for some applications.

When a camera is exposed for some time, you have smearing (lowpass filtering) due to camera movement, scene movement, atmospheric effects, diffraction in optics, non-ideal optical blur, anti-aliasing filter in front of the sensor, and the fact that sensels are more like «area integrators» than point samplers. Allign those factors «right» and the amount of aliasing can be kept in check.

Note that most cameras use a «Bayer» filter in front of the sensor. If you are pessimistic, you might want to use the «blue» channel with 1/2 the nominal resolution in each dimension and shortest wavelengths in order to see where aliasing might occur.

I have seen claims that a 24x36mm «fullframe» camera would need on the order of 500MP before all spatial information that can theoretically be conveyed by a perfectly focused f/0.7 lens made out of unobtainium within the visible spectrum is resolved.

Note also that imagery often strays far away from the theoretical ideals of Nyquist & co. I guess that comes down to the sensory apparatus in our eyes not applying (the equivalent of) a 1024-sample space-frequency transform prior to analysis. Rather, I think that we have smallish «edge» and feature detectors with low frequency resolution, and a preference for high contrast - even «fake» high contrast stemming from aliasing.

Yes, you can see that in pictures when the subject has tiny stripes or plaid shirts. This causes a disturbing visual effects, and professional are sometimes warned about that when they go on TV. Images are always of finite size, thus aliasing always exists to a certain amount, but might be attenuated in quantization, or barely noticeable to the eye.

In short, this happens when pixels are too close to faithfully capture a pattern, and in this synthetic image: 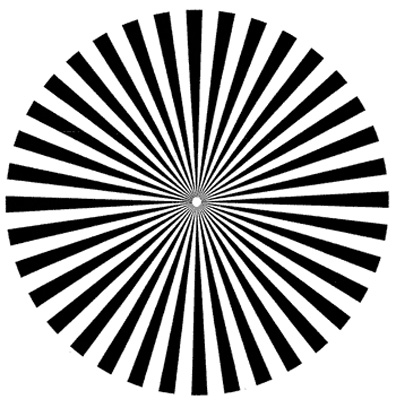 Around the center, the precise conic stripes (on the circonference) begin to become weird (you can enlarge). There are JPEG artifacts as well, but there is little confusion. This happens as well in real life examples, with photographs of tiny times and bricks of buildings: 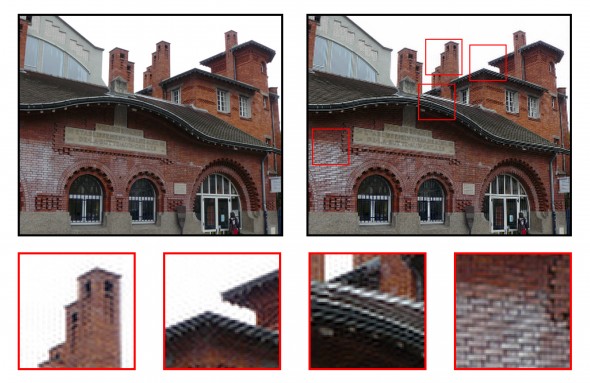 Not the answer you're looking for? Browse other questions tagged lowpass-filter nyquist aliasing sinc or ask your own question.

7
Demonstrating the effect of aliasing
1
What does “two signals aliasing to each other” mean?
1
Visualizing aliasing in Matlab
3
Benefits of oversampling in a realtime noise-cancellation system
0
What happens on signal during aliasing?
0
does aliasing occur always if i sample a vibration in real world applications?
0
How do Anti-Aliasing Filters filter the signal?
0
What is an example of using aliasing to your advantage when recovering an input signal?
0
Aliasing at $f_0 + kf_s$