MRI K-space to image: why track frequencies in two dimensions?

While trying to better understand how an MRI goes from k-space to an image, I came across this wonderful website that explains how you would represent an image as a collection of rows of pixels where each row of pixels is represented as a sum of waves of greyscale intensity.

First you select a single row from an image.

Then you apply the Fourier transform to represent the row as a collection of waves. 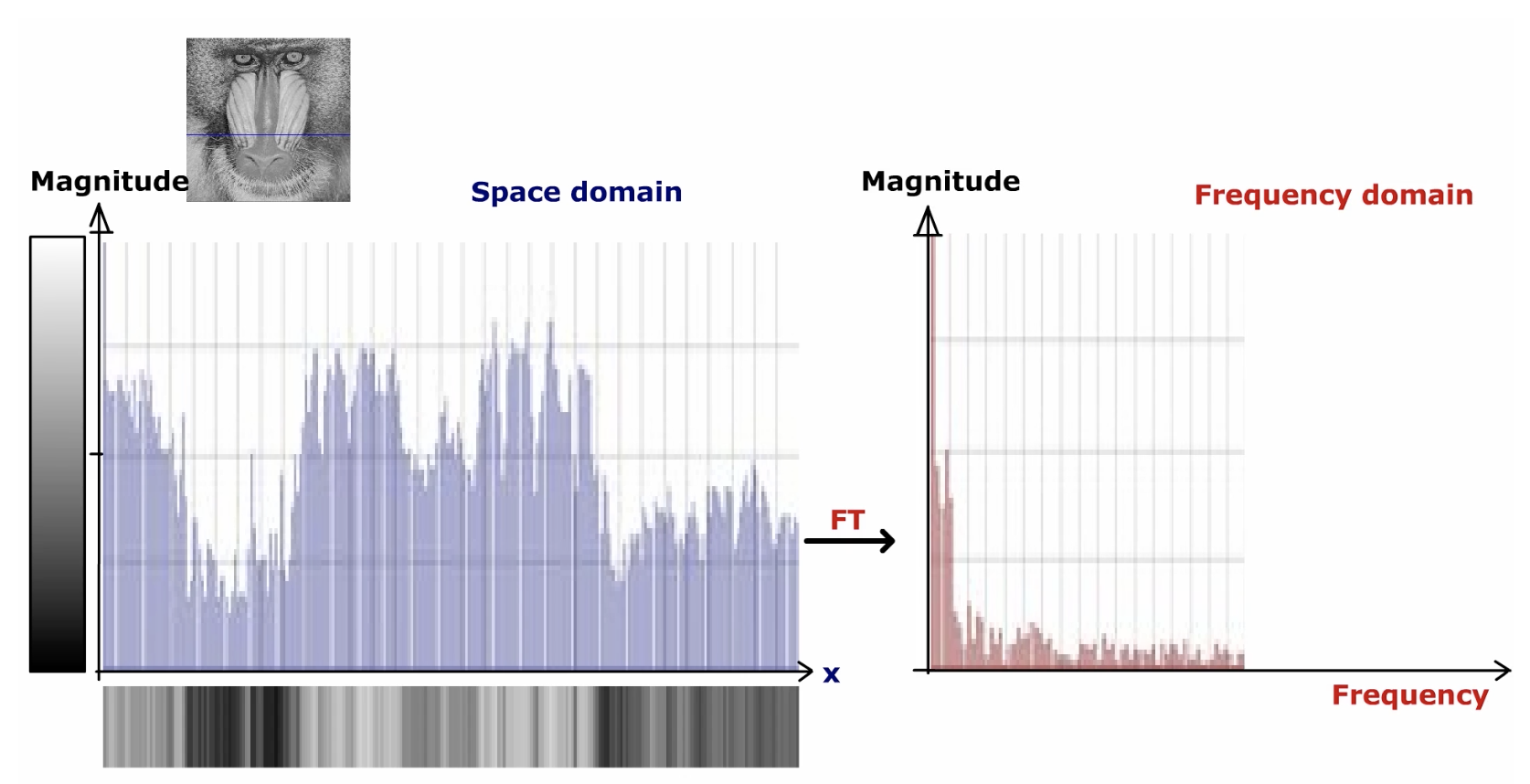 What I don't understand is, if we can get the frequencies for each row and accurately reconstruct what a row of the image looks like via frequency encoding, and if we already know where each row is in relation to the other rows (position of the blue line), why do we need to do the same basic thing along a different dimension (the y-axis using phase encoding)? Isn't it sufficient to simply stack the rows to get the full image?

The reality (as in physical reality, the phenomenon) is that a pixel's "value" is determined both by what is happening along the X dimension and the Y dimension (in k-space).

If you want to reconstruct an image you have to do it from **two spatial sinusoidal waves.

If you reconstruct an image from rows, you synthesize grey level variation from just one direction. You know how a pixel's value varies with respect to its left and right neighbours but not its top and bottom neighbours.

Here is a mental experiment: Take an image and run DFTs along the rows (that is, the horizontal direction, as per the recipe that motivated this question). Now take the original image and add 42 to the pixels of the rows of the upper half (this looks like a step in the vertical direction). What is the effect of this? You are only introducing a DC to the ROW DFTS, other than this, the rest of the spectrum is exactly the same.

You can choose to get even more adventurous in that vertical direction and modulate the pixels by sinusoids. They will go completely amiss, why?

Hope this (and to an extent this) helps.

in MRI, you don't start with the image as pixels in spatial domain, but with the k-space data!

So, you don't "construct k-space from the image", you "construct the image from k-space", which takes a 2D inverse Fourier transform.

And that's not "do it row-by-row"; that is "do it on all rows, then all columns of the result".

Not the answer you're looking for? Browse other questions tagged image-processing fourier-transform or ask your own question.

10
On the de-noising of time-frequency images
11
Understanding Cb and Cr Components of YCbCr Color Space
3
Working around FFT windowing?
7
Removing marker pen artifacts from scanned microscope slide images
0
What should be the dimensions of a Fourier Transformed image?
5
Image Processing and applicability of 2D Fourier Transform
2
What is Gamma correction - is my beginner's interpretation right?