I struggle with two simple questions.

First. What is the distribution of the signal on the output of the lin-log amplifier if Rayleigh noise is driven to the input of it.

But I found a statement somewhere in engineers forums that a lin-log amplifier works more trickily and "takes a logarithm of an envelope" and "there were a lot of problems with erroneous simulations of lin-log signal transformation". It was just statements without explanations that gave me feed for thoughts. I found experimental data. It looks more like: $$ f_{out} = \frac{\log(x)}{K_{1}}e^{\frac{-\log(r)^{2}}{K_{2}}} $$ I'm afraid that it is very similar to the First Extreme Value Distribution and they are indistinguishable in an experimental environment. For example, the additional logarithm of both of them results in Gaussian-like distributions and the difference between them are again almost completely indistinguishable.

Is there anybody who understands the problem and could share the idea on how to represent the output of the lin-log detector mathematically and simulate it numerically?

The distribution of the log magnitude output of a log amplifier would be according to the log of the magnitude of the input. Although in implementation the log amp is not simply taking a log of the input signal, the result is indeed the log with reasonable accuracy (typically linear to the log scale within a fraction of a dB). Below shows how this should appear for both Rayleigh and Ricean distributions. Given the OP is not seeing the same skewness as is the case for the Rayleigh at the log magnitude output of the log amp, I would conclude that the input signal (which he does not have access to) was not Rayleigh distributed.

Notice the skewness decreases significantly as the dominant path in the Ricean distribution (A) becomes more prominent, as would be expected. 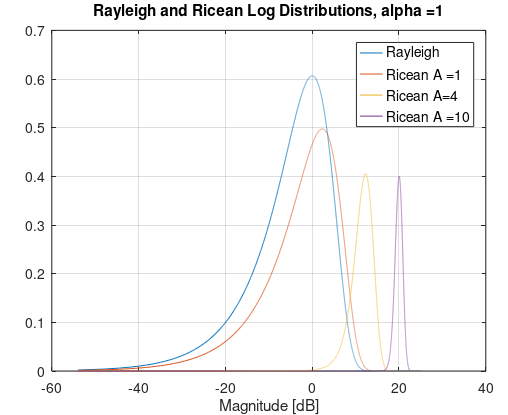 Not the answer you're looking for? Browse other questions tagged signal-analysis noise continuous-signals or ask your own question.