In the paper Fast R-CNN available here, I am trying to understand the relationship between the region proposals and the convolutional feature map.

So from what I understand, Fast R-CNN takes in an image and a set of region proposals for object detection, with the goal of taking each proposal and giving it a classification from a set of classes, and a bounding box (or none in the case of background regions). More processing can be done after with the region proposals to merge them etc. but in general this is how it works.

What I don't understand is how the region proposals relate to the convolutional feature map. In section 2.2 the authors state that they test their architectures by pre-training networks with some image net architectures, which we will modify by replacing the max pooling layer by a RoI pooling layer, followed by some fully connected sibling layers for regression and classification. My question is what is the relationship between a region proposal, say a region $(x,y, h ,w)$ given by the top left corner and a height and width, and the convolutional feature map, which may have spatial dimensions (and definitely more channels) that differ from the original image, (see the image below)? It would make sense certainly if the feature map had the same spatial dimensions as the original image, but otherwise I'm not sure. 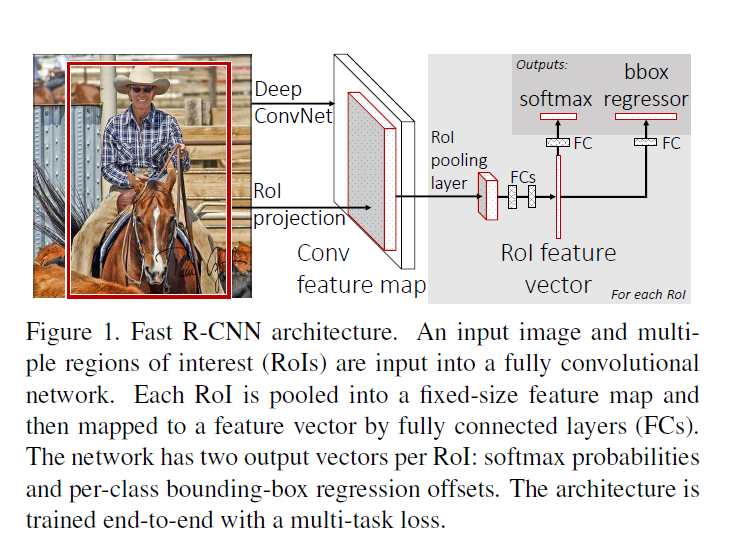 The relation is a spatial relation

Now lets track a the pixel x0,y0 between successive layers of a CNN.

For simplicity i will consider only the following layers types (The same has in VGG 16 which is the feature extractor used in the article, for other layers the same logic can be applied with small variations):

Now what happens when we insert an image to Convolution layer? In other words to which pixel an input pixel x0,y0 is mapped to in the output of the Convolution?

Summery of tracking (Given our simplified case)

Converting x0,y0 in image to x0^,y0^ in the output feature map

9
Understanding SURF Features Calculation Process
14
What is the difference between feature detectors and feature descriptors?
5
Translation invariance in max-pooling and cascading with convolutional layer
1
Image processing using conv-neural net
0
What is the difference between a range image and a depth map?
4
Can deep neural networks achieve real-time video analysis?
2
Faster R-CNN and 4-step Alternating Training