In the paper , MSER is being defined. Please help me understand what is MSER and how to implement it. The paper says,

The regions are defined solely by an extremal property of the intensity function in the region and on its outer boundary.

The concept can be explained informally as follows. Imagine all possible thresholdings of a gray-level image I: We will refer to the pixels below a threshold as ‘black’ and to those above or equal as ‘white’. If we were shown a movie of thresholded images It; with frame t corresponding to threshold t; we would see first a white image. Subsequently black spots corresponding to local intensity minima will appear and grow. At some point regions corresponding to two local minima will merge. Finally, the last image will be black. The set of all connected components of all frames of the movie is the set of all maximal regions; minimal regions could be obtained by inverting the intensity of I and running the same process.

I could not picture out the things the author wants to relay. Can anyone describe it to me in simple terms or a demonstration will also do. Formal definition of MSER is shown in the image below. 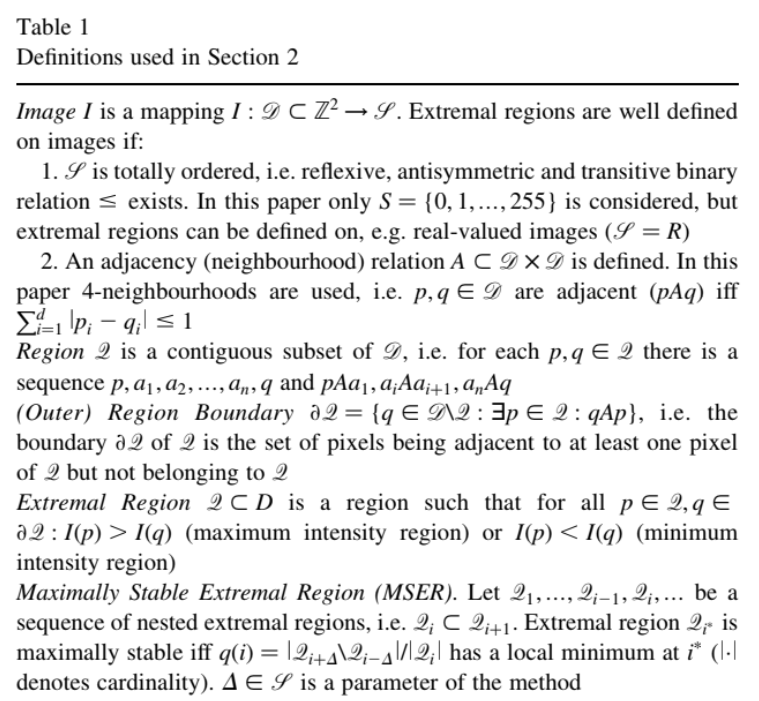 Browse other questions tagged image-processing image edge-detection or ask your own question.

5
How to amplify regions with specific color in an image?
5
Detecting Individual Photos on a Scanned Page
0
Segment highly packed nuclei with dotted high intensity signal inside each object
2
How does image masking work?
0
What does opencv `mean` function do when passing a mask of zeros?
0
Cropping binary images based on pixel counts in python