This is as much a request for comment and critique as anything else. I am looking at tracking how a system perturbs an input that is a (real) sinoid of varying frequency.

My goto method for aligning two sequences would be the cross-correlation, plotting here the real component of its output (as y_bwd is complex): 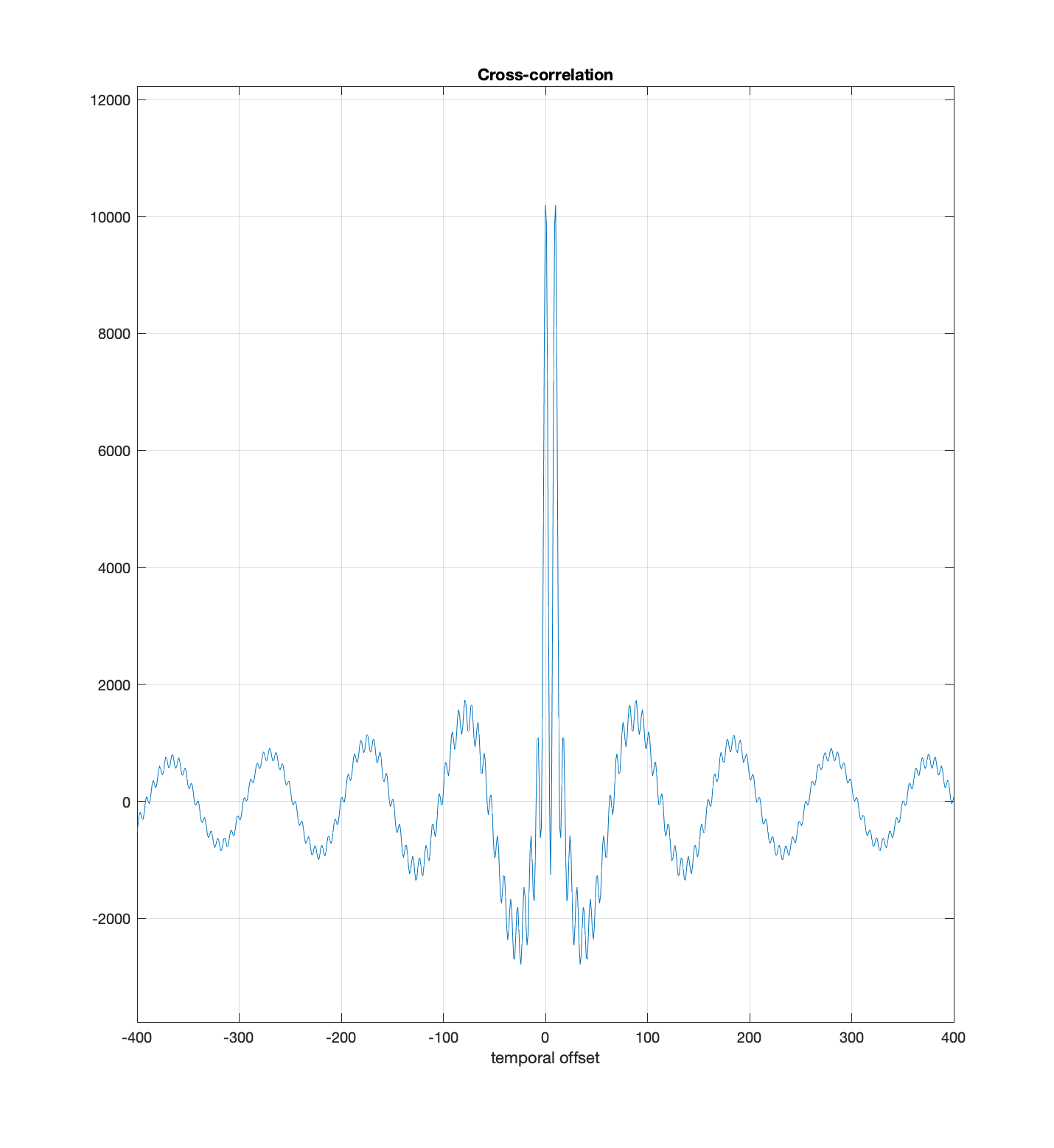 Zooming in on the central (0-lag) area, we see an immediate peculiarity: rather than a central maximum at the symmetry center (lag=5), there are two off-center peaks (lag = 0 and 10). This is of course because we have introduced a timeline disontinuity in z.

A tempting direction would be:

As a low complexity alternative, we might count the distance between zero crossings. Note that we are here smoothing a function that is sampled 2 times per (local) cycle, rather than at the uniform samplerate. 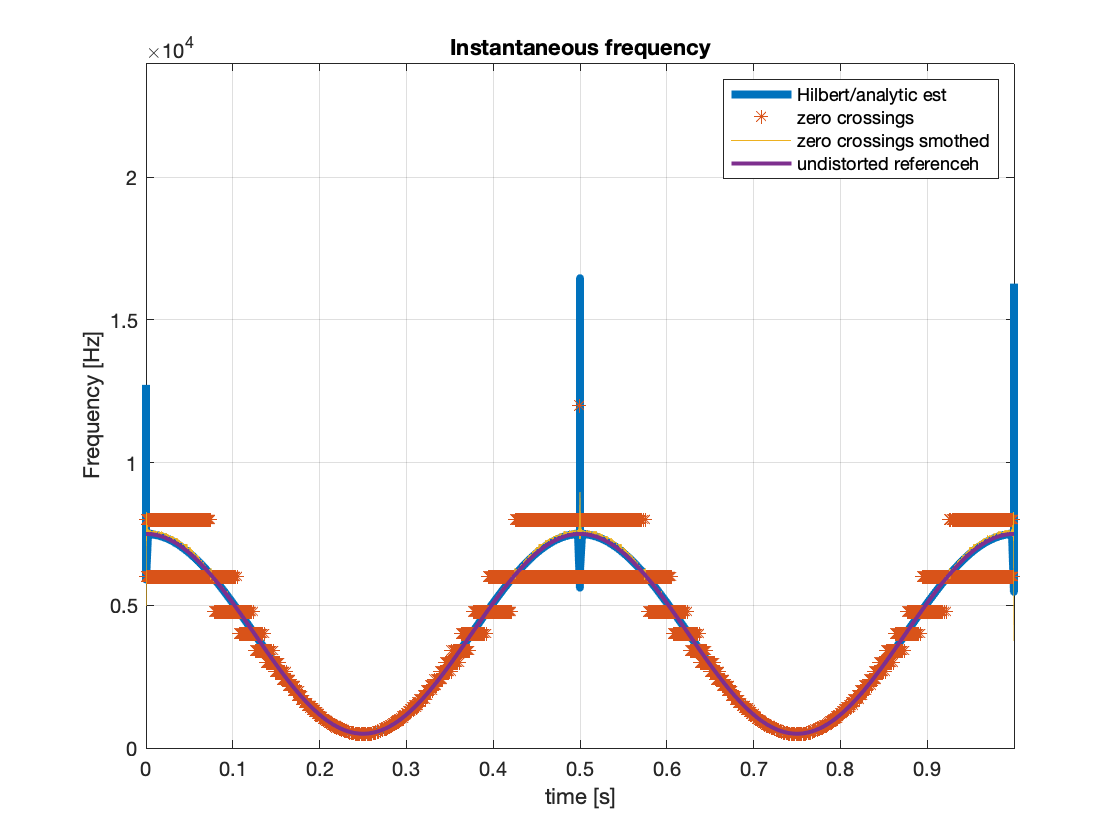 I was wondering what other solutions one might come up with, and how this relates to traditional tools from electronic engineering/radio. For tracking a slowly varying sinoid, the phase-locked loop (PLL) is a common tool, e.g. employing a feedbackloop of an rf mixer (multiplier) between an input signal and a reference, a smoothing filter and a voltage controlled variable frequency oscillator: https://en.wikipedia.org/wiki/Phase-locked_loop

When mixing with the conjugate of the chirp itself, one would ideally expect the filtered output to be a constant. A lowpass filter should leave us with the DC component:

We can see that the two waveforms are "in lock" for the first part (mean(cos^2(0:x)) tends towards +0.5), while for the latter part, there is a slowly modulated phase. 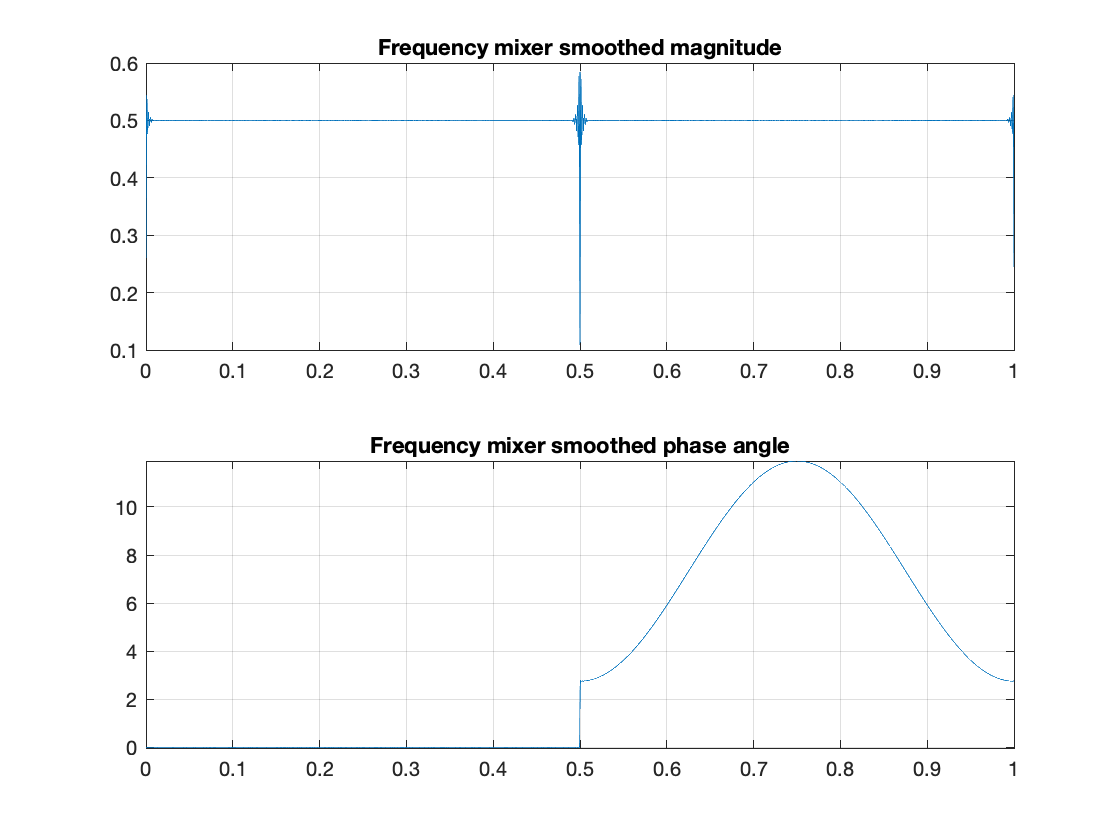 What else is calculated from z(i)*y(j), i=j? Thats right, the sample correlation matrix (equivalent to the covariance matrix with no mean subtraction and no normalization). At this point I had to limit the 'N' variable to 0.5 seconds due to memory constraints.

The diagonal of the corrmat is basically a Frequency mixer. But the sum of each diagonal also (collectively) forms the cross correlation. Rather than working on the diagonals of that matrix, I prefer to mangle it so each diagonal is now a row in a new, padded matrix:

Like with the frequency mixer, I'll use the same lowpass filter to smooth my recently "twisted" diagonals along time: 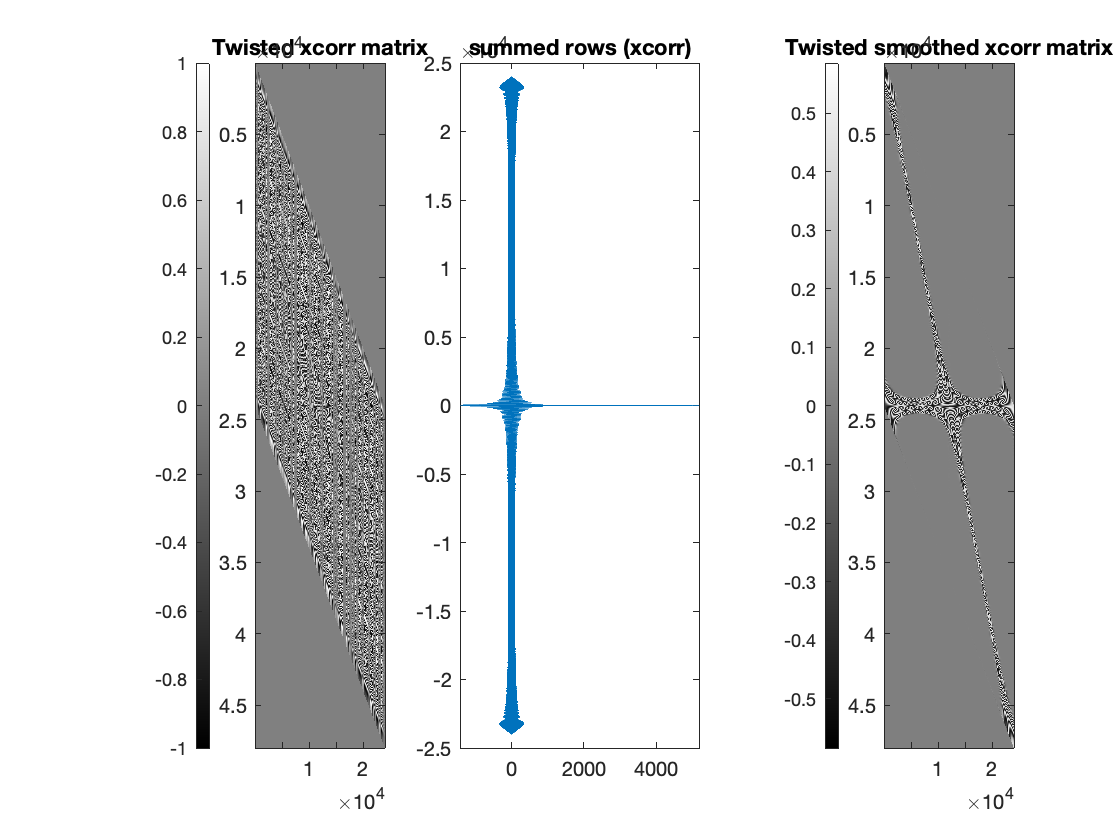 Picking the central few rows of the smoothed twisted xcorr matrix (equivalent with a few diagonals above and below the main diagonal), we see that the magnitude (top) contains few clues in this case. The phase angle is interesting though. Fo the first (undistorted) half, the line consistent with the main diagonal (no offset) is a constant. For the latter part, an offset consistent with 10 samples delay is a constant. 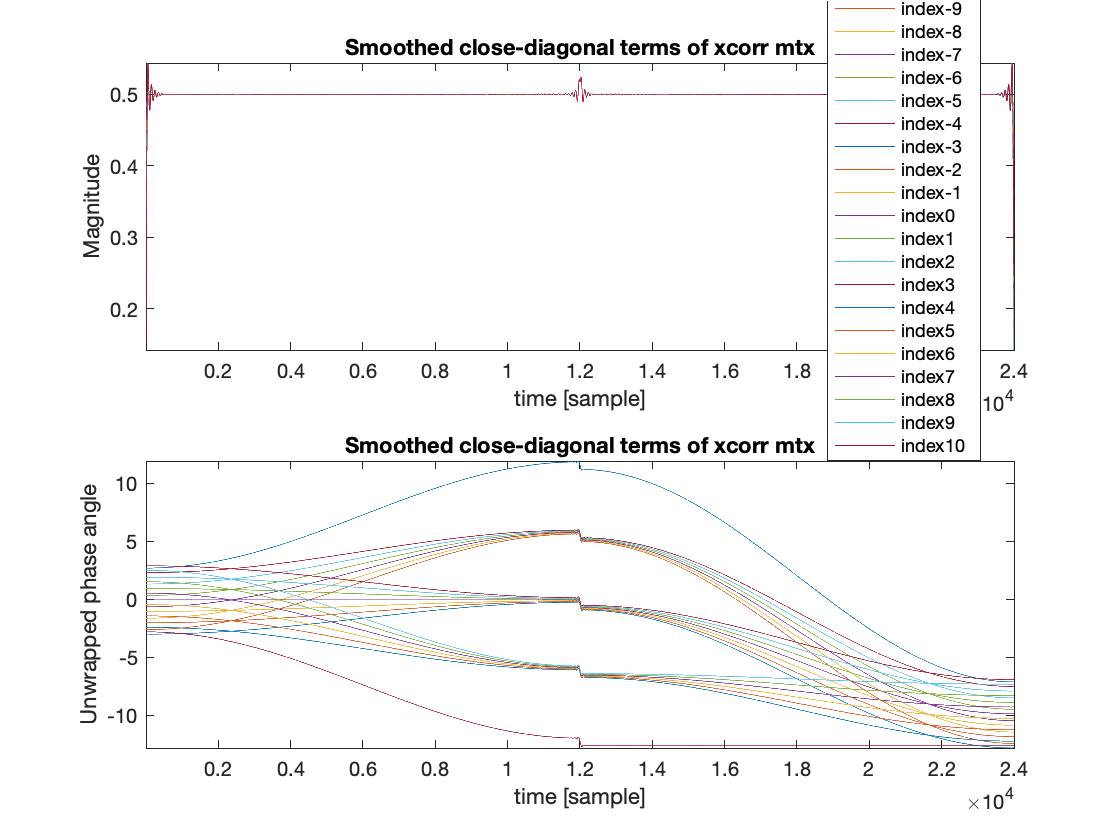 Can this be used for anything? Have I arrived at some for of "PLL" that would be forward controlled rather than a feedback loop?

Browse other questions tagged cross-correlation frequency-modulation pll analytic-signal or ask your own question.

9
Cross Correlation Matrix
2
Given an experimental FFT plot, how to find the best match from a set of generated FFT plots?
0
Auto/cross correlation of a cosine in the context of an adaptive beamformer
9
Calculate and interpret the instantaneous frequency
4
GCC-PHAT (Generalized cross correlation MATLAB)
2
Cross correlate a 2D array
3
Cross-correlation, sharp peak at 0?
0
Carrier Recovery, Frequency and Phase offset in (CP)FSK
2
Cross Correlation dimensions
0
Matlab: xcorr: Having trouble when I try to calculate delay between two sinusoids