Why use this instead of a positive frequency? I asked on the math forum but it just wasn't helpful.

I understand the idea of a negative frequency is important in general since many real signals like cosine can be constructed using complex exponentials of two opposite rotating frequencies. But why in the FT? Also would it be correct to view this as 'frequency' since in the complex domain it can be negative? I recall someone arguing it is not frequency but index: https://www.quora.com/What-is-the-meaning-of-negative-frequencies-in-the-Fourier-transform

An interesting explanation I had never seen was from wikipedia:

But can any signal input be modeled as a complex exponential form as above? For example, if your input was a rectangle function.

I think you may be confused about the use of negative frequencies and the sign of the integration coefficient.

Let's take a look at the inverse Fourier Transform

That basically means that you can construct any time domain signal as the from a set of complex exponential. So you can break down a complicated signal into a number of constituent parts that are hopefully easier to work with.

Of course you need to know what the weights for the complex exponentials, so you need to invert the formula above. You get

That is a very poorly written article IMO.

For real valued tones, there isn't a qualitative distinction between negative and positive frequencies, so there is no point in using negative frequencies. Choosing not to use them by convention is quite different than they don't exist.

For complex valued tones, the negative and positive denote the chirality of the signal, whether you have a left handed or right handed screw, and thus is qualitatively distinctive. Their existence is unquestionable.

The negative sign in the exponent in the definition makes it so a complex tone with a given frequency corresponds to the same value on the frequency scale instead of its negative. With a real valued tone, there is no distinction as you get a conjugate pair of frequency values. In the complex tone, it makes a difference.

The negative sign is by convention. The forward and inverse operations are equivalent in nature.

While reading the above few answers, it’s been stated like negative frequency has no physical significance, but it is completely wrong. Fourier transform is used to pull out - that component of a signal (under test)which is having a particular repetition frequency( or rotation frequency in that sense). If you agree to the fact that complex exponential represents a unit circle ( if the exponent value varies with time or any independent variable ). \begin{equation}  e^{ j \omega t} \end{equation} As the independent variable varies the point moves along a circle and it will have a particular frequency of rotation. A circular rotation can be defined with two things, the radius of rotation( amplitude or Fourier coefficient in that manner) and frequency of rotation ( number of 2 pi rotation completed in a second ), but if you look we need one more parameter to define the sense of rotation, whether the ‘thing’ is rotating clockwise or anti-clockwise.

Negative or Positive frequency defines that! It gives us the sense of rotation.

In the FT "negative frequencies" means nothing physically, however they are essential in the maths behind the FT. The FT is nothing more than a change of base.

The absolute value of the fourier transform is displayed below. 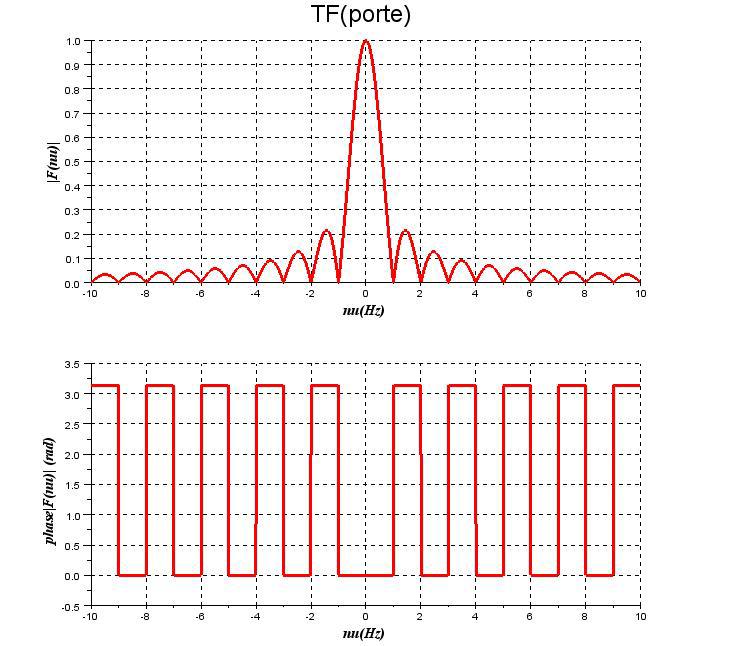 Imagine you want to retrieve your original signal from the FT, $\mathcal{F}(\nu)$, you will need to apply the inverse fourier transform defined as :

The signal we are trying to integrate is defined between -$\infty$ and $+\infty$ and that's why you need to keep the negative part, otherewise you won't be able to go back to the initial basis.

In the article you saw, they call "negative frequencies", indexes because it is directly derived from the discrete fourier transform.

To answer your last question, i guess that every signal can be represented as a sum of complex sinuoïds if its area under the curve is integrable. The Fourier Transform can be seen as a development of the fourier series of a signal with an infinite period. (Correct me if i'm wrong)

Not the answer you're looking for? Browse other questions tagged discrete-signals fourier-transform digital-communications continuous-signals complex or ask your own question.

104
What is the physical significance of negative frequencies?
8
How to get Fourier coefficients to draw any shape using DFT?
2
Extracting fundamental amplitude/phase from only half a period of a pseudo-sinusoïd

4
Fourier transform possible on non-rectangular part of an image
1
How to choose between taking the real part or the absolute value of an inverse discrete Fourier transform?
3
Fourier transform of a Fourier transform
1
How do I interpret the result of a Fourier Transform?
2
Taking the FFT of a sinusoidal signal and going back
2
How does the RaspberryPi radio hack convert digital GPIO signals to an FM signal?
0
Frequency spectrum of complex equivalent Baseband Signal - Frequency Content around carrier frequency
0
Extracting positive frequencies of discrete-time signal
2
Palmprint Identification - Why do we align the images before we use the Fourier Transform?
1
How to visualize this statement regarding Conjugate Symmetry