what does the order of filter mean?

To add, the reason it is called the order specifically is because it is the order of the polynomial as given by the transfer function of the filter- which for an FIR filter is just the coefficients with increasing powers of $z^{-1}$:

For example a three "tap" FIR filter with coefficients [0.5 1.5 0.5] is 2nd order with the transfer function given as:

After multiplying numerator and denominator by $z^2$ to be in positive powers of z, it is clear how this is a 2nd order polynomial in the numerator, consistent with the filter being a 2nd order filter:

Hence the reason order is one less than the number of taps.

An IIR filter is also implemented with feedback taps according to the order of the denominator polynomial. However implementing a 32nd order IIR filter would be very unlikely due to stability concerns, so the referenced filter is almost certainly an FIR filter. For stability reasons, the poles in higher order IIR filters are often isolated in implementation by factoring the long polynomial into separate filters such as 2nd order sections (bi-quadratic sections, or “bi-quads”).

A plot below compares the IIR and FIR structures along with the general form for the filter transfer function as used in MATLAB/Octave and Python Scipy.Signal. 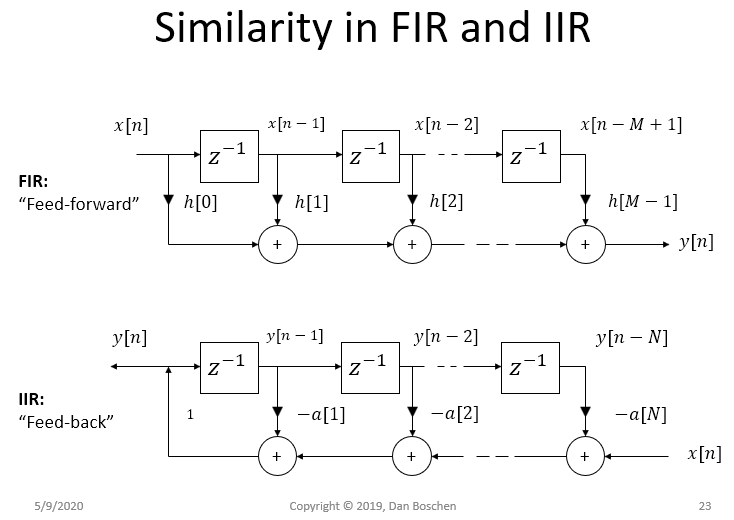 The order is classically the maximum delay (in samples) that is used to produce each output (Filter order by JOS). For FIR filters, the length is "one plus order":

would be 3-tap and order 2. If the filter is IIR, it would have "more coefficients" than "one plus order". I am not sure one can say "taps" for IIR filter. This recursive equation would be order 2:

A $32^{\mathrm{nd}}$-order with infinite impulse response (IIR) is likely to have stability issues. Even if it does not, the technique that goes "with each tap randomly varied by up to 5% to simulate physical differences" would be likely to endangered the stability randomly.

Not the answer you're looking for? Browse other questions tagged filters filter-design digital-filters bandpass or ask your own question.

7
How do I apply a Chebishev filter?
6
FIR filter gain
2
What does the stability margin have to do with the quality of a filter?
0
Tradeoff between Filter Order and Sections
22
How many taps does an FIR filter need?
1
Phase shift in higher order filters
3
Is it possible to design a band-pass filter with fewer taps than a series HPF + LPF?
1
IIR filter relationship between number of poles, order and second order sections