How to calculate EVM in %age of an Equalized Constellation in 16QAM?

I want to calculate the EVM for the equalized constellation. How can I calculate this so that the EVM lies within the threshold limit?

The Error Vector is the Euclidean distance from the actual sample at the optimum timing location in each symbol to the actual symbol location in a reference constellation (as the distance to closest decision boundary, just prior to decision). The measurement metric Error Vector Magnitude (EVM) is computed as an rms quantity over multiple error vectors, where the waveform and the decision boundaries are scaled to either the rms amplitude or a maximum amplitude in the constellation, depending on which standard is used. We can therefore use one sample for every symbol to compute a sufficient number of errors to derive a statistical quantity.

Below shows a single Error Vector for 16 QAM, and the error vector magnitude would be the root-mean-square of all error vectors as given by the formula above (once the constellation and the received signal are properly normalized as described). It also must be mentioned that the normalization by the rms of the waveform assumes the symbols in the waveform are equally distributed, but if not normalization can occur through known training sequences. The idea is that the error vector magnitude should be zero if all the symbols land on the exact locations in the constellation. 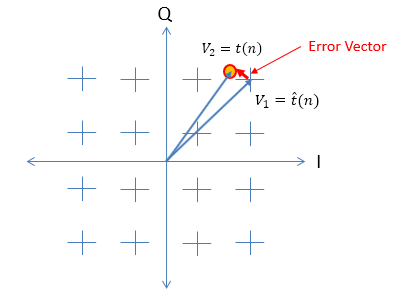 To compute EVM normalize the constellation (by either the rms, the peak level of an outermost point, or the rms of the magnitudes depending on which definition is used). The waveform samples just prior to decision (one sample per symbol) are similarly normalized which would then minimize the computed EVM (this is consistent with what the receiver would do anyway just prior to decision to minimize error rate, so it is very easy to compute).

Point being, if an EVM computation result is being provided or used, it is important to provide the definition and equation that is being used for that particular computation.

Not the answer you're looking for? Browse other questions tagged lms or ask your own question.

1
How is signal to noise ratio actually measured by receiver equipment?
0
How to measure EVM?