How can it be that there is a series of integrals in Fourier Series if it’s a projection on a continuous basis?

How can it be that there is a “series of integrals” in Fourier Series if Fourier is just an operation of projecting a continuous basis and multiplying the projection on the (continuous) basis members once again?

The short answer is that the sinusoidal components are only orthogonal if they are integer multiples of each other. Any other choice of frequency would not result in $<s1, s2> = 0$, which can be easily confirmed by comparing such cases (integer and non-integer related sinusoids). Thus the choice of basis signals is discrete in units of their frequency (the frequency domain), but the time domain waveforms that each of these discrete frequency values represent is continuous.

The frequency domain signal can still be a continuous signal if we allow zero-value signals, as it is just the non-zero values that would necessarily be discrete. That said, we can use discrete signals to describe the waveform in frequency without any loss of information.

The intuitive view starts from understanding that the Fourier Series Expansion states that we can represent a continuous time single-valued function (with no discontinuities) of duration $T$ as a series of sinusoidal components (sines and cosines) each with a frequency of $1/T$ and integer multiples.

Consider such an arbitrary function below: 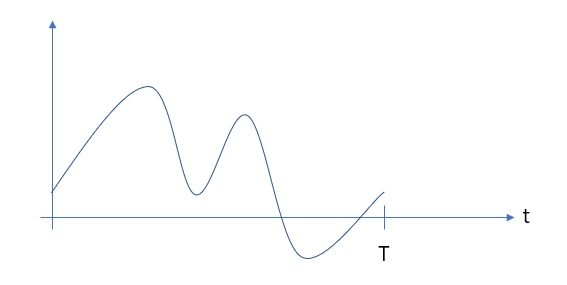 Mathematically we need not limit time to $T$ in the the reconstruction; time can extend to $±\infty$ as long as we allow the signal in time to be periodic over period T, we will achieve the same result as derived in the Fourier Series Expansion. Since the waveform repeats exactly in time over every interval $T$, we need only express the result over period $T$ but extending it as such provides further insight into the Fourier Series Expansion, such as the inability to converge if there was a discontinuity between the end and the beginning of the interval. Here in the graphic I purposely made that boundary continuous so that the repeated waveform has no discontinuity at each transition, thus this is an example that the expansion will converge everywhere from $0$ to $T$ where in general such a continuity would not exist and you will typically see severe ringing at the start and end of the reconstructed waveform.

Thus the waveform components in the decomposition MUST also be cyclical over the interval $T$, otherwise they cannot possibly converge to the same waveform over the next period of $T$, meaning the signal cannot be periodic over $T$. (As demonstrated with the possible first two components of the illustrated waveform as shown below.) 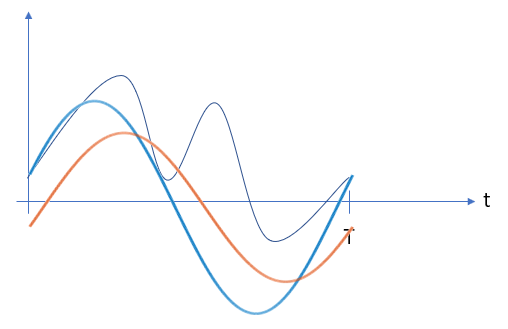 It is periodicity specifically in the time domain that is associated with discrete values of frequency in the frequency domain since the other frequencies if they did exist would destroy the periodicity over that interval: In order to be discrete in frequency, periodicity must exist in the time domain. Consider a sine-wave itself which is periodic it time and exists at one frequency. As demonstrated with the expansion an arbitrary periodic waveform can have multiple frequency components but they all must be integer multiples of the fundamental component at frequency $1/T$. I like to explain it like this: If I could call out your name exactly once per second, and exactly the same way each time--the resulting frequencies of my voice would only exist at 1 Hz and integer multiples of 1 Hz, all the way out to the 4KHz or so where spectral content exists.

This also works in reverse: periodicity in frequency is associated with discrete values in time (sampling). When we sample a time domain signal, we end up with multiple copies of the signal spectrum in frequency, spaced by the sampling rate. Same thing- in this case the frequency spectrum is continuous and periodic while the time domain signal is discrete. The DFT is an example that is discrete both in time and frequency, and therefore there is an implied periodicity both in time and in frequency!

Below is my answer to my own question that I understand after reading Dan’s answer.

Indeed, we do a projection on the orthonormal basis and then multiply by the orthonormal basis. [ To get a coordinate if we speak about maps with x,y coordinates system, which we can sum up to get any “point” - alas 11.145,0 plus 0,47.0 would give 11.145,47.0. Same for signals with inner multiplication. ] But in first place we multiply by the signajl. If the signal is continuous then we’ll get integral. If the signal is discrete then we’ll get a series.

Only after talking about applying the projection, we have a sight, a view on either discrete frequencies or continuous frequency domain. (If looking only at the spoken integral/series.)

The first series/integral is NOT by any way a representation of time domain in the first place, nor the integral/series shall reflect continuousity/discreteness. We se the continuousity/discreteness of the frequency domain only and only by the formula. If we have k (it can appear in an integral!) then we have discrete frequency domain and if we have omega, ($\omega$) then we have continuous frequency domain. And the only way to see this right away is by either looking at Reverse Fourier if it’s in front of us or by periodicity/non periodicity of the original signal!

That’s it.
Enjoy the course!

Not the answer you're looking for? Browse other questions tagged fourier fourier-series periodic projection or ask your own question.