How to correct for delays in a PAM-X signal with orthogonal CDMA?

I have a receiver which receives data bits at a rate of 5kbit/s. The number of data bits per burst is low (say, 16 bits). These databits are obtained after despreading the incoming signal using an orthogonal CDMA code (8-bit Walsh Haddamard code). This implies that the incoming chip rate is 5*8=40 kchips/s. The actual signal I get from the ADC is an upsampled I/Q version at complex baseband, sampled at a certain sampling rate (e.g. 5Msps). I implement the system in gnuradio (but the question is general).

I figured that instead of explicitely performing the despreading via multiplication and summing up the values, it is easier to use the cdma_code as a filter. This can be interpreted as a form of matched filtering (I think). However, this simplified version misses an important point: Timing. In the worst case, the downsampling happens at the symbol or bit transitions and the result is garbage. Hence I use clock synchronization based on polyphase filtering (https://wiki.gnuradio.org/index.php/Polyphase_Clock_Sync).

I tried using the polyphase clock sync block where the matched filter combines the matched filter and the CDMA code as suggested in Marcus Müllers answer below. However, I think such a system is unable to find the correct offset.

Consider this simple MATLAB experiment which generates a sample stream encoding $[1,-1,1,1]$. The receiver simulates the "Polyphase Clock Sync" block in gnuradio by finding the time shift that minimizes $(b\cdot db/dt)_{t=nT}$ where $b$ is a shifted version of the input signal:

Since this block uses $b$ as an objective function (using the delay index that minimizes the sum of the samples of $b\cdot db/dt$), there must be a global optimum which finds the correct sequence $[1,-1,1,1]$. However, there are multiple optimum delays (values close to zero): 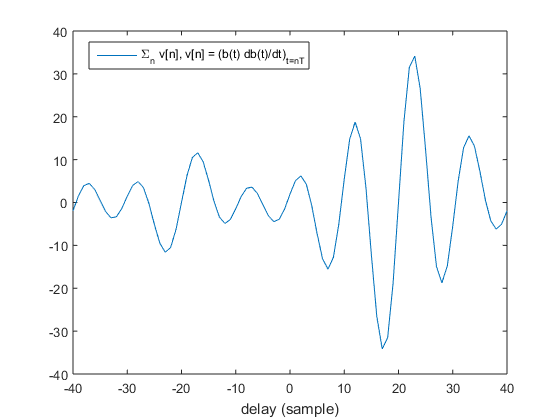 Now I plot the resulting bit stream for all the delays where the objective function is close to zero and only one shift gives the correct $[1,-1,1,1]$ pattern: 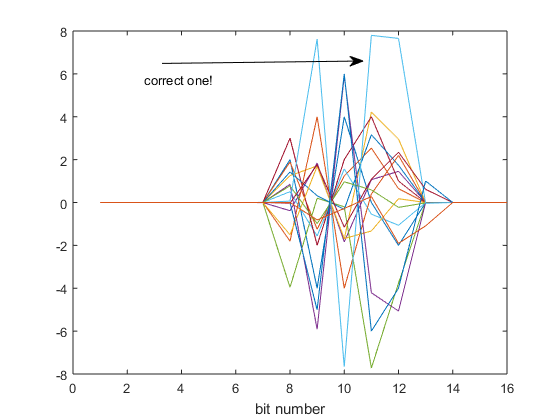 I can reproduce this experiment with a gnuradio model as well (https://www.dropbox.com/s/48fy30vwkivahqz/test_polyphase_clock_recovery_cdma_direct.grc): 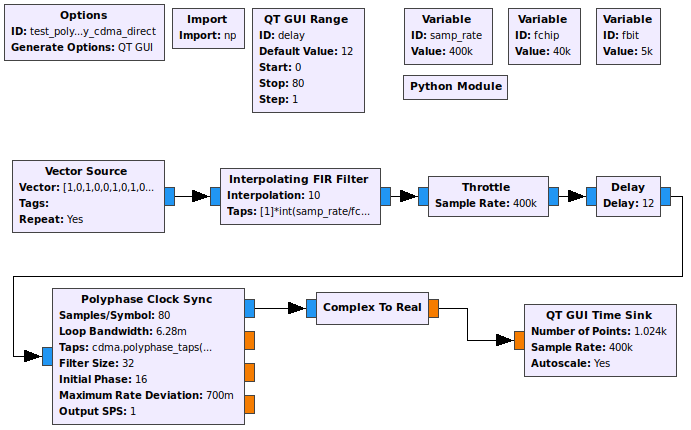 My question is: How to implement such a system and how would one do this in practice?

In either case, you'd only do one synchronizer.

Not the answer you're looking for? Browse other questions tagged digital-communications resampling sdr gnuradio spread-spectrum or ask your own question.