Conditions for analytical signal reconstruction with the Hilbert Transform (HT)

I'm new to the Hilbert Transform, I was reading the paper: "SISAR Imaging - Radio Holography Signal Reconstruction Based on Receiver-Transmitter Motion", and the next sentence was written in the paper:

The HT states that an analytical complex signal can be reconstructed from the signal’s real part under the condition that the real amplitude and frequency modulated signal in the form: $$ S(t) = I(t)\cos(\theta(t)) $$ has the spectrum of $\cos(\theta(t))$ outside the spectrum of its envelope $I(t) \in [−f_0, f_0]$.

I have checked some documentation on the Hilbert Transform and I have not been able to find that condition, so, why is this condition needed? What is the reason behind it?

Let me use the notation from Bedrosian's research report "The analytic signal representation of modulated waveforms" in a slightly simplified version: 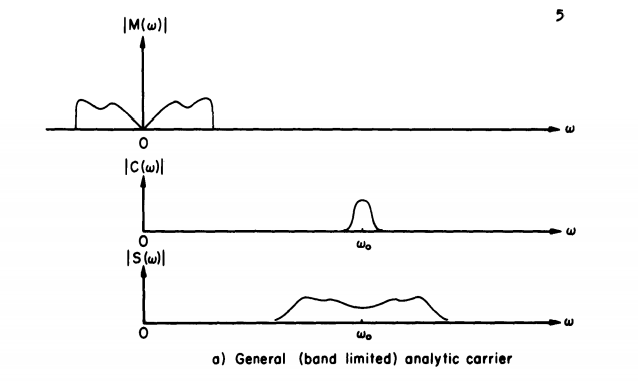 The condition that the spectra of $m(t)$ and $c(t)$ do not overlap is equivalent to the requirement that $s(t)$ be a true band pass signal, i.e., $s(t)$ has no DC component.

I'm sure that this is what is alluded to by the sentence you quoted. I do agree that this is not obvious from the chosen formulation.

Not the answer you're looking for? Browse other questions tagged modulation hilbert-transform or ask your own question.