Suppose that $h(t)$ is the impulse response of LTI system. The input signal $x(t)$ is periodic with period $T$. Determine $h(t)$ so that the output signal $y(t)$ only be the DC component of $x(t)$. Is $h(t)$ necessarily unique?

EDIT: Just to clarify, there are infinitely many filters that satisfy your requirements. You just need unity gain at DC, and zero gain at frequencies $f_k=k/T$, $k=1,2,\ldots$. Any low pass filter with unity gain at DC and a cut-off frequency $f_c$ satisfying $0<f_c<1/T$ is a solution (as suggested above).

But there are also other solutions, such as filters with notches at $f_k=k/T$, $k=1,2,\ldots$ (and unity gain at DC). One such filter was proposed in Hilmar's answer.

The DC value is simply the mean. Since the signal is periodic you only need to take the mean of one period. This can be simply done with

(1) will not converge, so that doesn't work

(2) is the best way for a function that's not periodic. It will work for a periodic function as well but is needlessly complicated

I would do the following, first design a filter that notch's out just the DC. A first attempt would say to place a zero at z = 1, or at the unit circle on the real axis where real part = 1, the transfer function for this is given as $$ H_{1}(z) = 1 - z^{-1} \tag{1}$$, the frequency response of this transfer function is shown below in the first figure.

Now we have very much a proper notch filter, notching out DC. The effect of placing the pole just inside/under the zero is to negate the effect of the pole at nearby frequencies, but not negating it at exactly $z =1$ or DC.

This $H_{3}(z)$ when inverted would give you the desired DC filter. The frequency response of this filter is shown below:

I have illustrated $H_1(z)$ and $H_2(z)$, just for illustration of design and motivation. It is the $H_3(z)$ filter that is the desired filter to extract the DC.

This method is called the pole and zero placement method of design and is apt for such scenarios. It is standard literature you can look it up on the web. I found one relevant question for you on stackecxhange itself, link below.

Note: Also the ideal filter here would be almost a Dirac Delta in the DTFT placed in DC, but the inverse transform of this is am infinite sequence that is always 1, which when implemented practically would need to be curtailed thus spreading the corresponding frequency response in the DTFT around zero

If $x(t)$ is periodic then it can be written using the Fourier series expansion as:

So now we need to use this information to design the impulse response $h(t)$. You specify that the system should only output the DC value. We use the equation for $a_0$ and integrate over the previous period as to keep the filter causal: 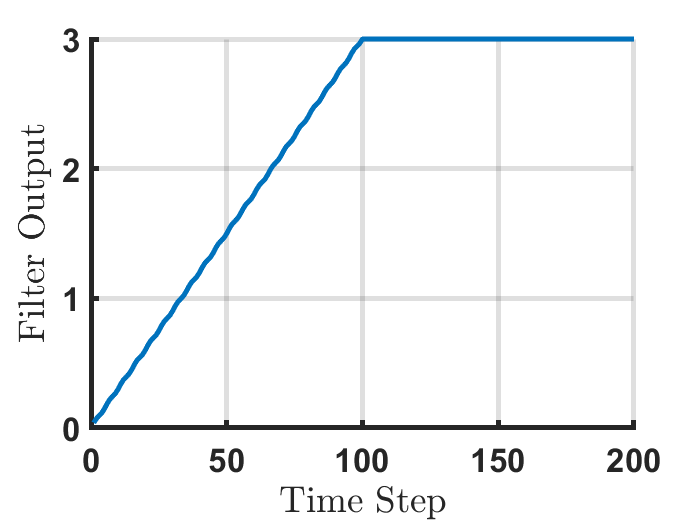 Since the signal is given to be periodic with period $T$, it has a Fourier series. The DC value is given by

The result is essentially similar except that we have to be a bit more careful with endpoints.

Are the LTI systems described above unique? Well, No and Yes.

Yes, if in addition, we insist on the filter being as short as possible and having as little delay as possible.

What if $(9)$ and $(10)$ hold only for $t, T, N \geq 0$ and $x$ is $0$ for negative arguments? Well, the filter proposed here has a start-up transient in the output, but the output settles down to the DC value once one full period of $x$ has been observed and stays there for ever afterwards.

I will ignore comments re best estimators in presence of AWGN etc. There is no estimation being done here, and noise is not an issue.

Not the answer you're looking for? Browse other questions tagged continuous-signals linear-systems impulse-response or ask your own question.

7
Difference between DC component and zero frequency component of signal
6
Filter design with zero - pole placement method
0
Extracting the DC component of a signal, that proportional to the displacement about the y-axis