What is the need of IIR filter? When FIR have generally good/desirable characteristics?

FIR filters are generally stable and have linear phase response. These two characteristics are often desired in dsp

So why do we need and use IIR filters,despite the fact that IIR filters often have issues in these two characteristics of stability and linear phase response ?

The biggest advantage of IIR filter is that you can achieve the filter specifications with much lesser order compared to FIR.

In a recent question (Lowpass Hann filter in Python) a transition band $\omega_{cutoff-passband}=0.05\pi$ to $\omega_{stopband}=0.136\pi$ was achieved with just $N_{IIR}=4$, but using FIR filter with Kaiser window, the order $N_{FIR}=55$. This results in much less complexity in implementation (multipliers, adders) reducing area required for implementation on a chip. In the above exmaple, for a given output, IIR requires 4 multipliers and 5 addition operations. For FIR, 55 multiplications and 54 addition operations are needed. Of course, there are provisions for optimizing this, but you get the idea..

Also, for the given example, in the pass band the phase is nearly linear for the IIR filter, so it results in much less distorted output for the pass band frequencies (stop band frequencies will get distorted but they are attenuated away by the filter). In IIR, you have the additional flexibility of placing poles as per your requirement to fine tune the filter attenuation/ripple. So it may seems FIR has advantage in terms of pure linear phase but IIR isn't far behind.

Code used to compare the order 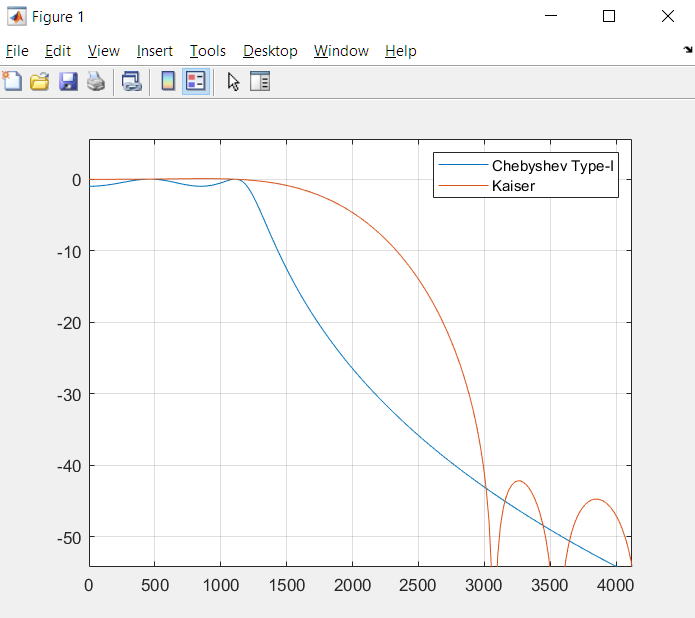 As you can see Chebyshev Type-1 provides a much higher attenuation of frequencies beyond pass band cutoff ($\text{1200Hz}$).

IIR filters require less calculations per sample output, for example consider the M point moving average (FIR) and leaky integrator (IIR) low pass filters, with all the goodness of the moving average in terms of linear phase, stability etc, they require M multiplications and M-1 additions per output. Whereas an IIR filter requires 2 multiplication and 1 addition.

So the bottomline, any time computation cycles in not an issue, go for for FIR

Disclaimer: there are certain situations (such as DC removal) where IIR is a very apt and natural choice

You could capture the impulse response of an IIR filter, apply a window and apply it as a long FIR filter approximating the IIR filter. It would usually be a bad idea though.

If you are making, say, a user-facing Equalizer, IIR filters can offer a simple parametrization of "cutoff frequency" rather than recalculating a sinc function every time the user twists a knob.

IIR filters have less arithmetic and memory requirements. But I believe that slightly higher numerical precision is usually required for similar results.

0
what is purpose of IIR filter?
0
Lowpass Hann filter in Python

9
Downsampling lowpass filter for audio: FIR or IIR?
4
Is this system an FIR filter or an IIR filter?
2
What does the stability margin have to do with the quality of a filter?
16
What are the problems with designing an FIR filter using FFT?
0
FIR vs IIR complexity
2
IIR Filter - calculating the phase response
3
Are all IIR filters unstable in nature?
3
Design a linear-phase FIR filter approximating the magnitude of a given IIR filter
7
Why can adaptive IIR filters result in unstable solutions?
3
Notch filter: differences between IIR and FIR filters