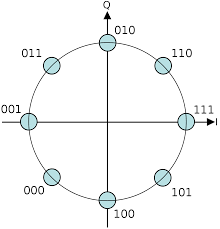 8
What is the definition of a "Symbol"

6
How to measure/estimate symbol rate of a signal with unknown ( but probably QAM ) modulation?
4
Understanding I and Q modulation
0
Non coherent Symbol Error Rate vs Es/N0
1
Why do digital modulation when the signal entering the channel is analog?
6
What is the meaning of channel capacity?
3
How does the Meyr-Oerder Timing Algorithm work?
2
Digitalization of a signal
0
what is OQAM (Offset QAM) and why it is required?
0
Time domain representation of a modulated signal when symbol rate >> carrier frequency?