How to compute Laplace Transform in Python?

I am trying to do practicals for signal processing where I need to Laplace Transform a function. Used 'fft' of numpy before. Nothing of Laplace is found in the documentation. Do we have any other alternative?

Given the approach started in the OP's Github code I have this suggestion:

Observe that the unilateral Laplace Transform given as:

Is just the Fourier Transform of a causal function with a weighting exponential:

So to proceed with a graphical solution, the first step is to learn how to produce surface plots in python, and then index through $\sigma$ within the Region of Convergence (see below) and compute the FFT of $e^{-\sigma t}x(t)$ to create the complex surface values given $\sigma$ and $\omega$ as the magnitude of the complex result.

Which will return as result the following:

Where $\theta(t)$ is the unit step function, which is shorthand for saying the result applies for $t\ge0$ and is zero elsewhere.

Further Details On a Graphical Solution

For the graphical representation of the Laplace Transform, we typically just show the locations where that function goes to infinity (poles) or is zero (zeros). In fact every other location on the surface is uniquely defined by the pole and zero locations alone, so that is all we need to show to define it.

This is best shown with an example. Since I already have the graphic for this particular case, consider the time domain function of a decaying sinusoid given by the formula below and the plot below that where we see in the dashed red line the envelope for the decaying function $2e^{-0.2t}$. $u(t)$ is the step function which is $0$ for time $t<0$ and $1$ for time $t \ge 0$. 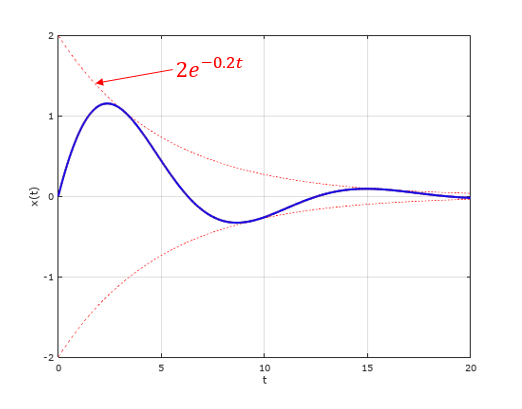 To get the Laplace Transform (easily), we decompose the function above into exponential form and then use the fundamental transform for an exponential given as :

This is the unilateral Laplace Transform (defined for $t = 0$ to $\infty$), and this relationship goes a long way since we can describe the response of any causal linear system using such exponential forms.

So the equation above, assuming $t>0$, and using Euler's identity becomes :

Which we can then easily take the Laplace Transform to get a function of the complex variable $s$ :

The graph of the magnitude of this is shown below, which is a surface plot for all values of $s$, where $s$ is a complex variable with real and imaginary components traditionally described as $s = \sigma +j\omega$. So we simply choose a particular complex value $s$, and plot the magnitude of the result of $X(s)$. 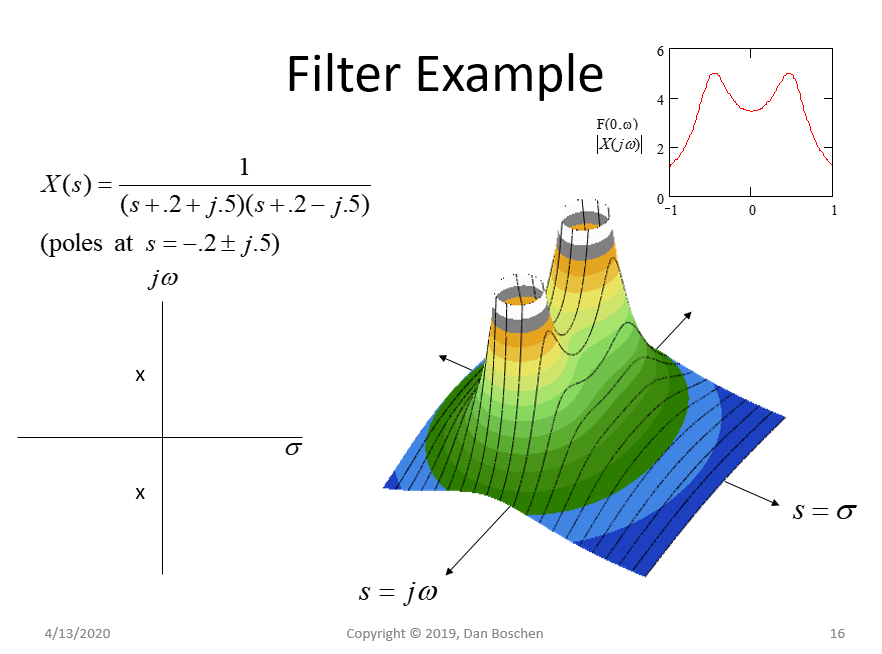 The Python code to generate a similar plot is as follows:

which will not converge since the function $e^{0.8t}$ continuously grows larger for larger $t$.

Not the answer you're looking for? Browse other questions tagged discrete-signals python laplace-transform or ask your own question.