I was reading the following paper about direct conversion receivers from TI: link.

In this paper they compare the performance of direct conversion and heterodyne receiver with IQ mismatch.

Consider an IQ signal with amplitude or quadrature mismatch such as these QAM waveforms depicted below: 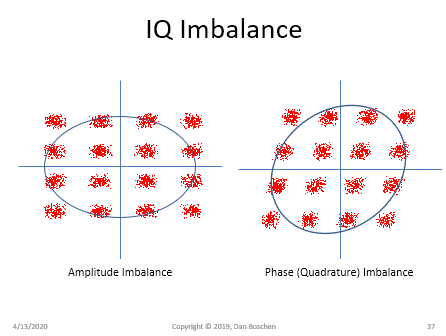 These can be decomposed into the sum of a perfectly balanced IQ signal and another signal that is modulating 0 to 180° with any fixed phase rotation. The perfect balanced IQ signal will be translated from the positive RF spectrum to baseband (as I depicted in the other post here Can Carrier Offset cause Image Problems) as a complex signal and thus if there was a carrier offset that would be maintained as an offset in the complex baseband signal but easy to correct for with a subsequent complex frequency translation. The signal that is on one axis only is a (potentially phase rotated) real signal and this will have alias distortion.

Consider an example with: 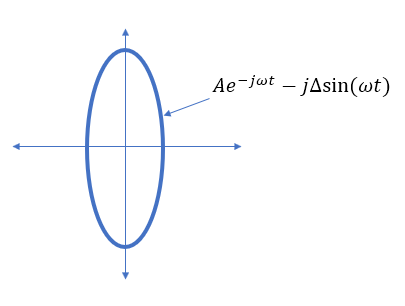 So the down-conversion that would have been image free with perfect IQ balance for a real input as follows:

Where the first component $e^{(\omega_c-\omega_{LO})t}$ is the only one that would appear at baseband.

With the amplitude impbalance as depicted above this example now becomes:

Consisting of the same result above with a new term given as:

Where we see we get two components at baseband, one $-\frac{\Delta}{2}e^{j(\omega_c-\omega_{LO})t}$ is constructive with our original signal (in this case decreasing the amplitude but no other distortion, while the other is an image $-\frac{\Delta}{2}e^{j(-\omega_c+\omega_{LO})t}$ which would cause serious distortion if the RF spectrums were not symmetric (as is typical for quadrature modulated signals) or if we had any frequency error between the carrier $\omega_c$ and the LO $\omega_{LO}$.

You can create a similar example with quadrature error, as well as the appearance of LO leakage with DC offset.

Consider this with the spectrums in a Zero-IF receiver as depicted below; the LO is depicted as a negative frequency only - with quadrature or amplitude error the positive frequency would start to appear starting with a very low level. You can follow the related spectrums when that occurs knowing the output is the convolution of the RF input spectrum with the LO spectrum to see the effect on the output. 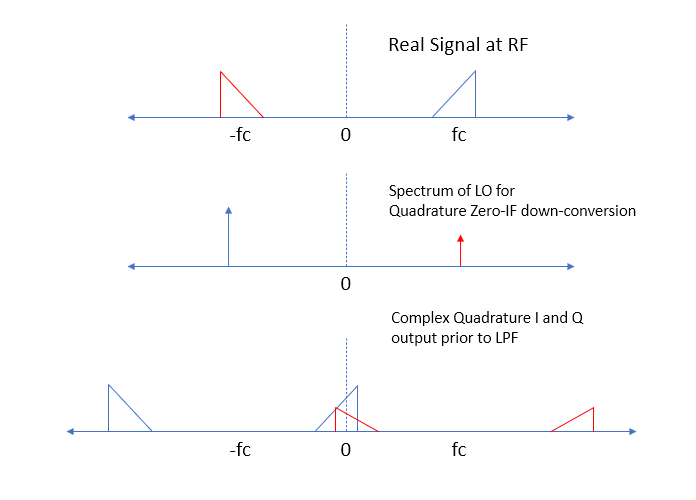 Thankfully with modern signal processing this is easy to detect and correct for, which has increased the popularity and use of Zero-IF receivers (and Direct RF transmitters). Below shows a typically correction approach for amplitude and phase imbalance: 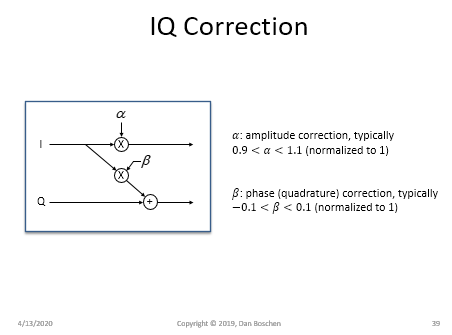 How can IQ mismatch create an image signal?

IQ mismatch at receiver does not create image signal. Image signal is created by IQ Imbalance at transmitter. What IQ Imbalance at receiver does is, it is not able to nullify the effect of image signal if present. One big disadvantage of Direct Conversion receiver is the signal quality degradation due to mismatch of I/Q arms. Semiconductor companies spend millions of dollars (time+effort) just to come up with calibration algorithms to remove this imbalance. I digress, but here it is

If your baseband signal is having bandwidth from $-\omega_0$ to $+\omega_0$, the baseband frequencies will interfere among each other along $\omega =0$. The interference is limited to within the desired channel as shown in Figure 6.

Why it is separated by IF in heterodyne systems?

In heterodyne system, you are not downconverting the passband signal using I/Q arm but using only $\cos(\omega_ct-\omega_{IF}t)$ which will result in $\cos(\omega_0+\omega_{IF}t)$ (after rejecting the component at $2\omega_c$). This signal has components at $f_0+f_{IF}$ as well as $-f_0-f_{IF}$. So the "images" are far apart at $2 \times F_{IF}$. Because next stage we have digital direct conversion and the images are apart by $2\times f_{IF}$, the Heterodyne receiver is more robust to IQ Imbalance.

Not the answer you're looking for? Browse other questions tagged qpsk or ask your own question.

10
the relationship between bandwidth and the datarate
1
Meaning of Q and I in all-software QPSK communication systems?
1
QPSK and OQPSK Modulation
2
I/Q Sampling and Demodulation
3
Gardner timing recovery and constellation diagram
5
Envelope behavior dIfference between QPSK, OQPSK and $\pi/4$-QPSK
3
When I double bit rate I do not see a difference in I_spectrum and Q_spectrum, but why?
0
How to separate Even and odd part (in-phase bit streams I and quadrature-bit streams Q) of the signal?