Can Carrier Offset cause Image Problems

The main reason why we use the Direct conversion receiver with zero IF is that we don't have to deal with the problem of images. For achieving zero IF we need to ensure that the receiver Local Oscillator (LO) is working at the same frequency as the carrier. But I was wondering if there is an offset between the carrier and the receiver oscillator (due to reference mismatch or Doppler shift etc.) do we still have the image problem?
For instance, if the offset is equal to the channel spacing $f_{off} = f_{ch}$, then both the $f_c \pm f_{ch}$ fall at $f_{off}$ after downconversion mixer. Basically, the offset acting as an IF.
If so, do we still need image reject filters for direct conversion architecture and what then is the benefit of direct conversion architecture.

What I mean is explained in the figure below. We have a carrier frequency $f_c$ but due to some offset we send our data at $f_c+\Delta f_c$. Some other user is sending his data at $f_c - \Delta f_c$ (the image sideband). But after demodulation both the desired and undesired signal components fall back at $\Delta f$ 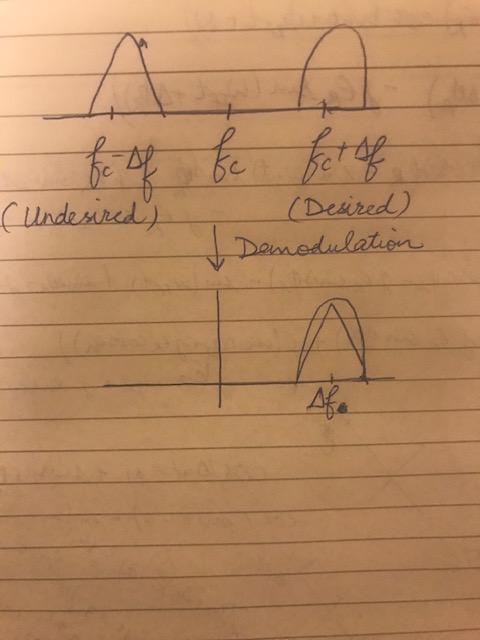 There is no image problem related to carrier offsets. Image issues are the result of quadrature and ampitude imbalance. Also, the graphic doesn't look correct to me, as a Zero-IF receiver would translate both $f_c +\Delta f$ and $f_c -\Delta f$ to baseband without overlap. It appears the OP may be confusing an image reject down-converter with a zero-IF receiver, as the image reject down-converter would be able to select either the upper or lower sideband signal.

This answer at this other post IQ Mismatch and Image shows exactly how we can have image problems with the Zero-IF receiver if there is quadrature or amplitude imbalance, and for complex modulated signals such as QAM, this would be an issue whether there is a carrier offset or not. Please refer to that post which explains how quadrature and amplitude error leads to images. Below I will further explain the differences between a Zero-IF Down-converter (or Zero-IF receiver, ZIF) and Image Reject Down-Converter (or Image-Reject Mixer, IRM) which helps to further understand how images are handled and also demonstrates the benefit of using complex signal representation to evaluate signal processing waveforms ($e^{j\omega t}$ rather $\cos(\omega t)+j\sin\omega t)$).

A side by side comparison of the two architectures is below

The input with the 0° splitter (RF input) along with the two multipliers and the two local oscillators (LO) signals (as $\cos(\omega_c t)$ and $\sin(\omega_c t)$) are the equivalent to a multiplication of the real input signal with a complex LO. This is clearer if you first consider a full complex multiplier and its implementation: 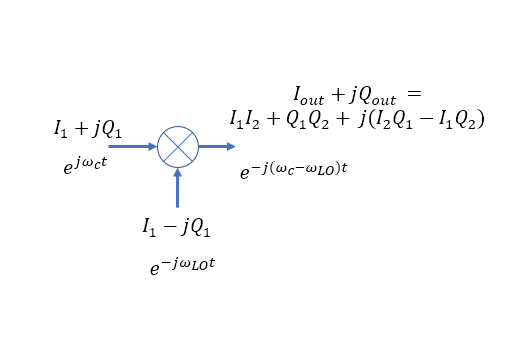 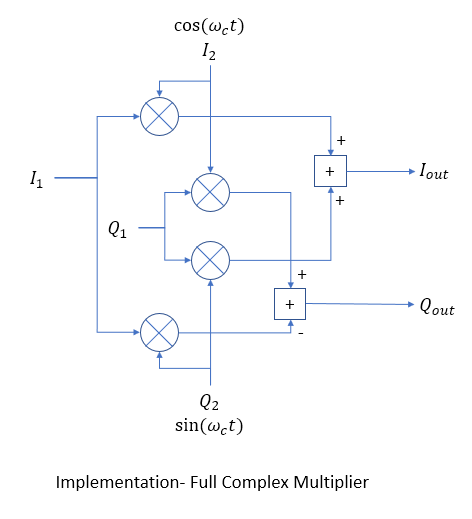 Both the Zero-IF and Image Reject down-converter perform the multiplication of the received real signal with a complex LO as depicted below, showing which part of the full complex multiplier is used: 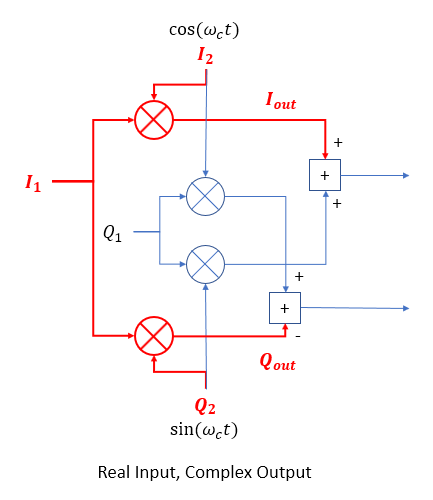 The spectrum during down-conversion process is shown below. The top spectrum is the real signal at the RF input (so has a conjugate symmetric positive and negative spectrum, meaning equal magnitude and opposite phase). The middle spectrum is the local oscillator with the two sine and cosine inputs to the mixers represented as a single complex signal ($e^{-j\omega_c t} = \cos(\omega_c t)+j\sin(\omega_c t)$). (The assignment of $j$ on the Q path is for mathematical convenience so that we can use the simpler complex equation forms, providing the identical result as the more cumbersome approach of expanded sines and cosines.) The top two spectrum convolve in frequency since we are multiplying in time, and for the impulses as shown this is simply a shift to the left, resulting in the bottom spectrum as the complex I and Q output from the mixer in both architectures prior to the low pass filters (LPF). 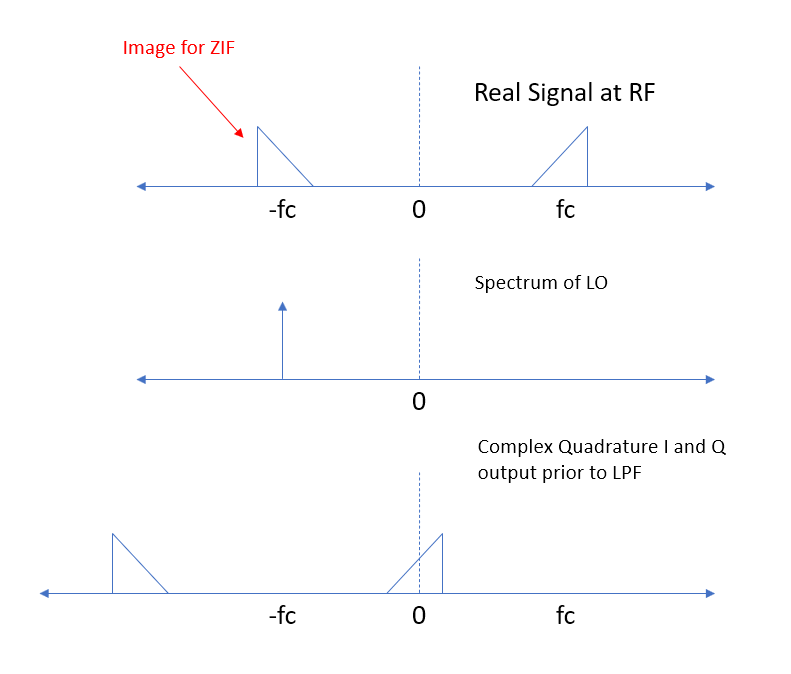 For the Zero-IF Down-converter (Receiver) we low pass filter to remove the high frequency signal that is at the sum of the LO and RF frequencies, and maintain separate I and jQ paths in our receiver for subsequent processing, in which case as a complex signal the positive and negative spectrums can be completely independent of each other. We can also shift this spectrum to the right and left through subsequent complex multiplying with $e^{\pm j\omega_{\Delta} t}$ to correct for carrier offsets if needed.

With the Image Reject Down-converter we convert the complex baseband signal to real by summing the I and Q with a quadrature combiner. This allows us to select the upper sideband or lower sideband of the RF input signal by either adding or subtracting I and Q in the quadrature combiner. The spectrum below shows the result of selecting the upper sideband, which now as a real output signal has complex conjugate spectrum (positive and negative spectrums have equal magnitude and opposite phase). 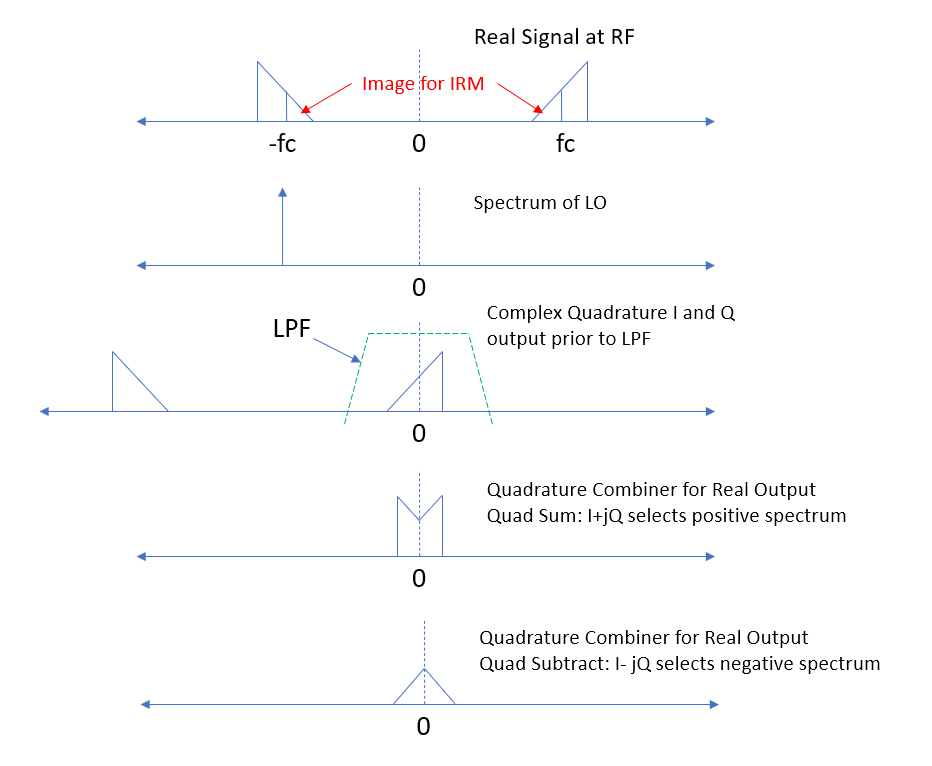 So if we maintain I and Q separately we can maintain the full spectrum as it was at RF, both upper and lower sidebands in vicinity of the carrier. By combining in quadrature we can achieve either the upper sideband only or lower sideband only as a real signal. Similar to how a sign change can select the upper or lower sideband for the Image Reject Downconverter, a sign change on the Zero-IF Receiver (-sine instead of sine in the LO), would cause the other (image) signal to instead be translated to baseband resulting in a reversal of the spectrum.

In both approaches image leakage can result if there is an imbalance in the quadrature frequency translation. With the Zero-IF this would be in the I and Q mixers and anything further along the IQ path, while in the Image reject down-converter this can also occur in the quadrature combiner. The appearance of the image for the two receiver architectures is shown below. 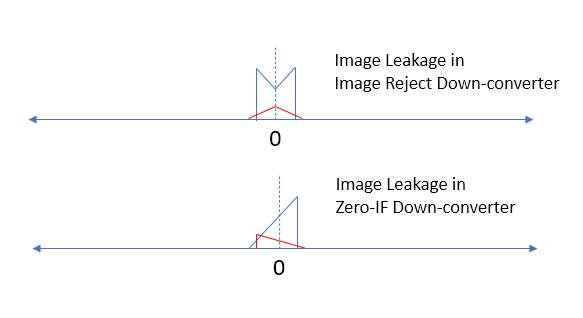 The diagram below helps to further explain how the quadrature combiner helps to select the upper or lower sideband from the complex IQ received signal. The quadrature block shown can be a "quadrature combiner" as shown, or a "quadrature splitter" if our signals flow in the opposite direction. It simply converts a real signal in the form of $cos(\omega t)$ to a complex signal $e^{j\omega t}$ represented as $I+jQ$. In the diagram below we consider two complex tones from our input spectrum above, $\omega_1$ which is a high side tone, and $\omega_2$ which is a low side tone. 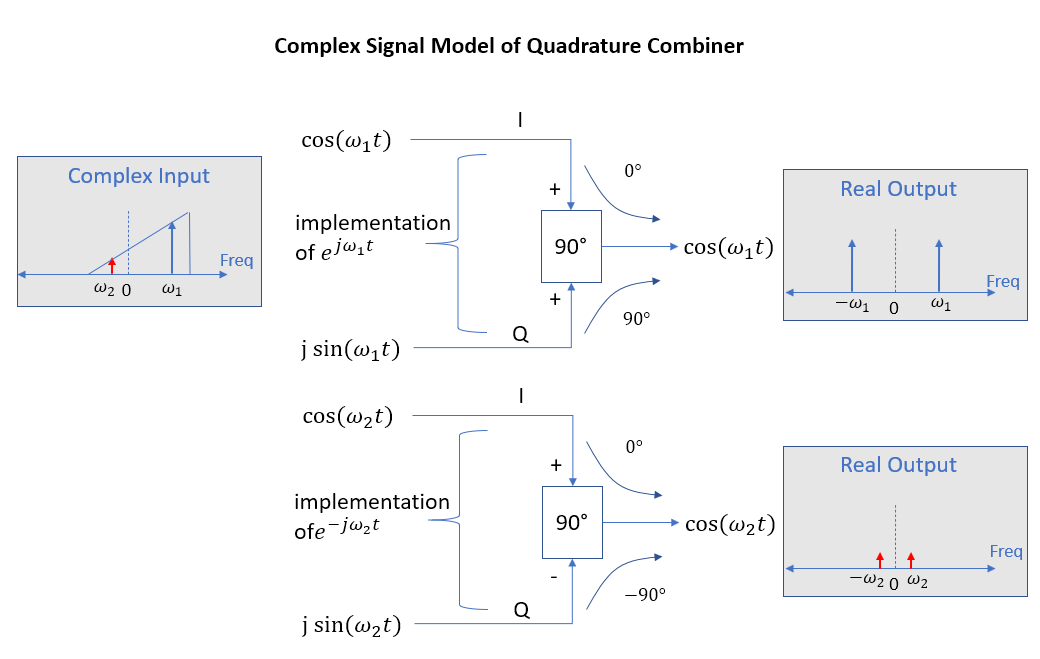 Resulting in $\cos(\omega_1 t)$ out, and we see if we subtract the I and Q components above we alternatively get $\cos(\omega_2 t)$ out.

If you consider the signal flows in the reverse direction this may be more intuitive, as depicted below. The outputs and inputs can be reversed since the combiner/splitter is a reciprocal network. 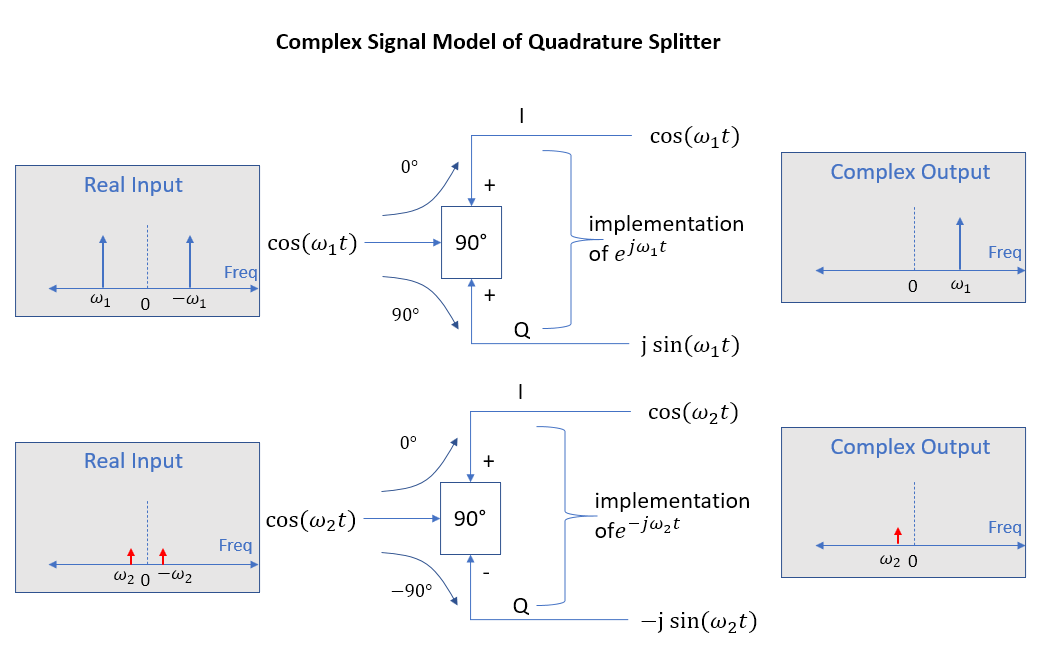 First let us look at it from the point of view of the innocent receiver who does not know that such a catastrophe has occurred that the offset itself is equal to the channel frequency. Simply speaking the systems would break down with IQ phase reversed.

If however we have realistic frequency offsets like that of Doppler shifts which for typical cellular frequencies in current wireless is of the order of few hundred Hz then this is usually measured at the receiver and the clock is adjusted. This offset is usually measured by correlating time domain samples after ADC in baseband, since a linear shift in frequency domain equals phase shift in time domain.

As mentioned in your other question IQ Mismatch and Image if you directly down-convert from $f_c$ as per your figure, the frequencies around $f_c+\Delta f$ is what you ideally want at the baseband. It still has frequency offset of $\Delta f$ which you will be able to correct if it is small, using preamble and other known symbols.

Not the answer you're looking for? Browse other questions tagged downsampling or ask your own question.

0
Phase Noise in Constellation Plot
0
IQ Mismatch and Image
-1
Decimation: how to preserve frequency content that lie above half the decimated sampling frequency?

5
Downsampling oversampled image (smallest size which retains image 'detail' within acceptable limits)
0
Image getting completely white on downsampling
1
Power spectrum of downsampled image
3
Triangle-kernel filtering problems at non-integer ratios
0
The difference of downsampling an image and smoothing an image?
2
Downsampling and Convolution: When Can one Swap Between Them?
1
Image downsampling with Haar DWT?
0
Can you downsample unevenly with even distribution?
2
Appropriate Gaussian filter parameters when resizing image