I have a large number of time series data and I need to be able to compare the similarity of the curves to a reference curve. The reference curve in question is shown in red in the figure, and I'd like to compute a similarity metric for the blue curve that tells me that these things are highly similar. 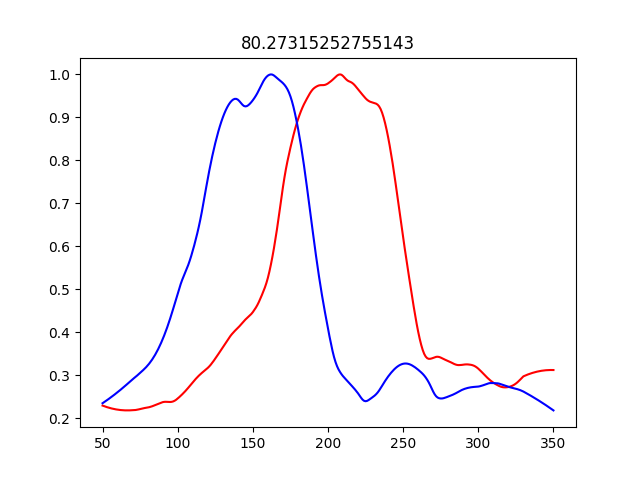 The problem is is that the scores computed using these techniques do not tell me that these curves are similar. For example, the fastdtw score is shown in the title of the figure, and this score is actually quite large when compared to other comparison scores for curves which I would judge by eye to be much more dissimilar. For example, the following curve has roughly half the fastdtw distance, despite it not having as similar of a shape. 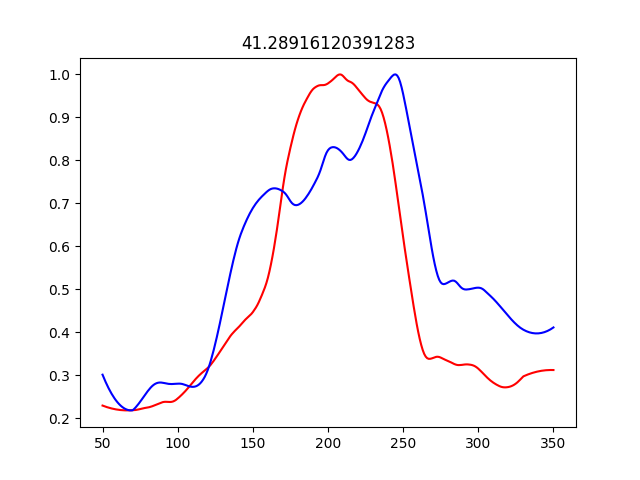 The issue seems to be that the temporal overlap is still being weighted much more heavily then more shape-related attributes. Now it's perhaps possible that a more nuanced understanding of what's possible with DTW would give me the outcome I need, perhaps using a more fully-featured DTW package like https://pypi.org/project/dtw-python/, but I'm unfamiliar with many of the options available in that package. Or maybe there's another method that would be better suited. Of course, I could brute force this by creating a piecewise continuous curve with a bunch of variable parameters describing a step-like shape, optimize them against the target curve, and take the best error match as the distance metric. If the optimization doesn't get trapped in a local minima, then this should work, but it's more involved and messier than I'd like to do if I can avoid it.

Would appreciate any other ideas you all might be able to suggest. Thanks in advance!

While I still don't yet understand all the options in the dtw-python package, it seems as though the relative ordering of my two examples is now as expected using the code snippet

This allows me to create the following alignment figure using that package. 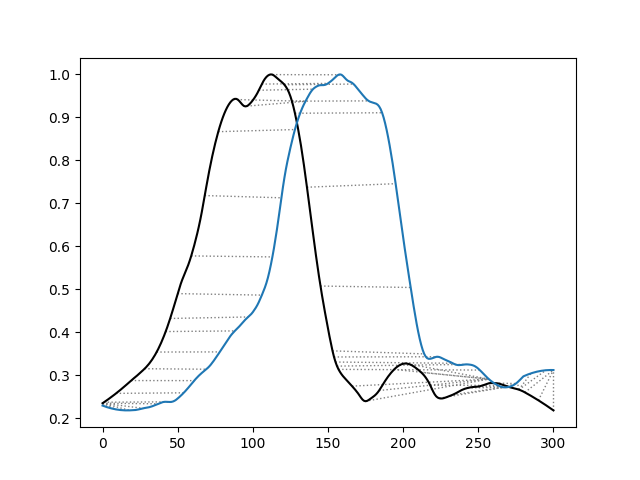 Additionally, the relative ordering of my two examples is now as I would hope. The more similar example has a distance metric of 6 whereas the more dissimilar example has a distance metric of ~11. I will have to explore the internals of this package more to see if I could be doing something even better, but this looks promising. Curious what the differences are in implementation that make this ordering so much different from the other two packages used.

Not the answer you're looking for? Browse other questions tagged signal-analysis python time-series waveform-similarity shape-analysis or ask your own question.

11
Good metric for qualitatively comparing image patches
10
What is the difference between normalized peak of correlation, versus peak of correlation divided by its average?
0
Looking for an algorithm that computes “Similarity” between two signals
2
Calculating similarity between bit strings/signal
0
High-pass filtering pre-processing before computing audio features
0
How to match a piece of very short audio based on key and pitch to find a piece in a large database that is most similar to it?
1
How do I quantify the amount of information being lost by filtering a digital signal?
3
How to match two signals that have similar shape but are scaled and expanded?
1
Finding the Sections of Signals that are the Most Similar