Bandwidth and BER of FM0 encoding

What is the bandwidth (i.e., the lowest possible bandwidth) and BER for FM0 encoding?

To be precise, this is my example of an FM0 encoded waveform: 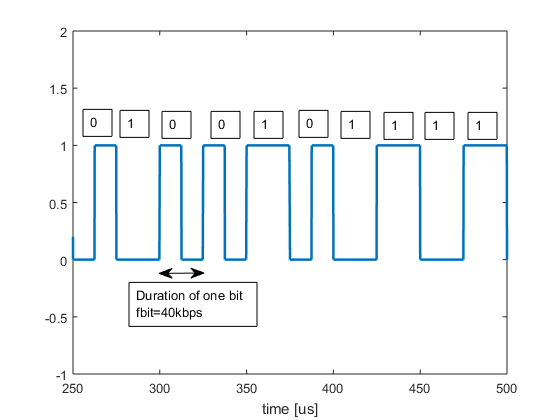 There is always a transition between each bit. For a zero there is an additional transition in the middle. For a one there is no transition (that's similar to differential Manchester code).

From the plot above I would assume that the minimum required bandwidth is 80kHz (if the waveform would be interpreted as NRZ waveform the bandwidth would be 80kHz). In my experiments I am surprised that 40kHz seems sufficient. I had expected that FM0 would just be an inefficient encoding.

Regarding the BER, I found the article "Some Interesting Observations for Certain Line Codes With Application to RFID" which derives the BER. However, from this article it is not clear if E/N0 relates to the symbol or to the bit. Actually, for this encoding it is unclear to me what exactly is the bit and what the symbol (for me, the bit is equivalent with the symbol).

I simulated the BER in MATLAB and found a deterministic discrepancy between simulation and the formula reported in the paper. The way I decode it in my simulations: I look at each halfsymbol. If two consecutive samples are the same, the output bit is a one; otherwise zero.

Due to this observation, I wonder if I can only get the proper BER if I employ a more sophisticated decoding scheme.

40kHz would be the two sided bandwidth, in which case sampling requirement is 40khz minimum

Not the answer you're looking for? Browse other questions tagged digital-communications bandwidth coding or ask your own question.

2
increase of encoding rate increases bandwidth?
5
QPSK Modulation/Demodulation in C++
3
Confusion in Channel Encoding and Convolutional Encoding
0
What is an intuitive understanding of the difference between the minimum required bandwidth and actual bandwidth?
2
Representation, Bandwidth and composition of Digital Signals
1
frequency band and Bandwidth
0
Combining CDMA with differential Manchester-like encoding?
1
Differential Encoding for M-PSK